Garrett Hampson led off the first inning with a triple, one of 15 hits for Colorado, and the Rockies spoiled Wade Miley’s encore to his first career no-hitter with a 9-6 win over the Cincinnati Reds on Friday night.

Miley (4-3) was roughed up one start after holding the Cleveland Indians hitless on May 7. His bid for consecutive no-hitters ended on his second pitch when Hampson tripled. He later scored on Miley’s throwing error on a pickoff attempt.

Hampson also singled and homered, while Charlie Blackmon and Yonathan Daza had three hits apiece to back a solid outing by Colorado starter German Márquez. 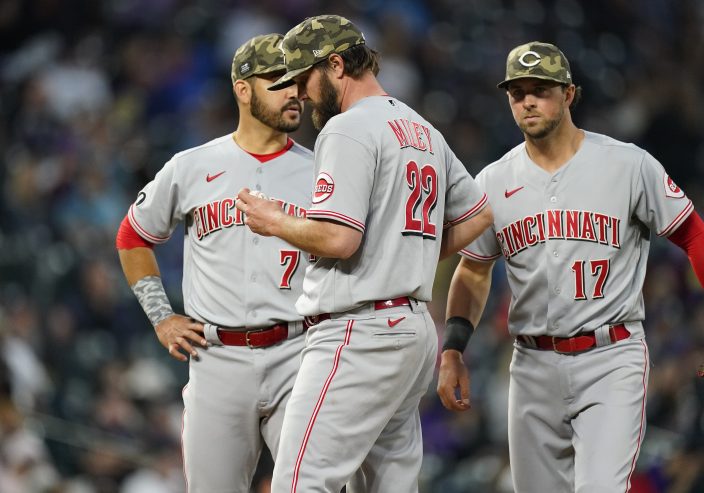 Cincinnati Reds starting pitcher Wade Miley, front, waits to be pulled from the mound as third baseman Eugenio Suarez, back left, and shortstop Kyle Farmer look on in the fourth inning of a baseball game against the Colorado Rockies, Friday, May 14, 2021, in Denver. (AP PhotoDavid Zalubowski)

The Rockies scored four times in the third on five hits and a walk and chased Miley after three more hits to start the fourth.

The left-hander gave up eight runs on 11 hits and struck out five in three-plus innings, his shortest start of the season.

Márquez was sharp before allowing a two-run homer to Jonathan India in the seventh. The right-hander was removed after walking Alex Blandino. 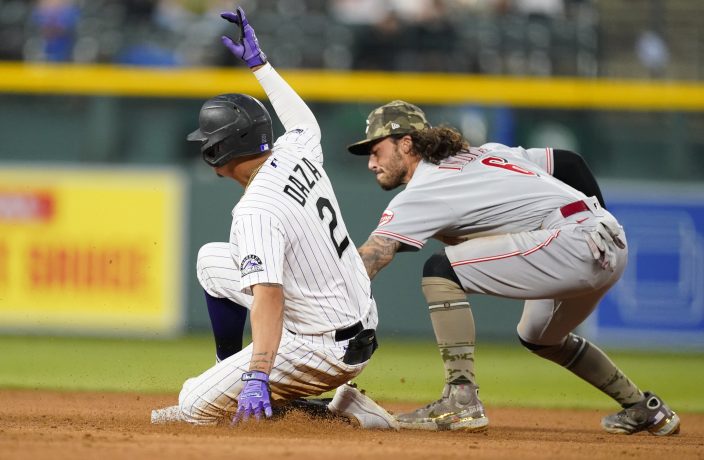 Colorado Rockies' Yonathan Daza, left, slides safely into second base with a double as Cincinnati Reds second baseman Jonathan India applies the tag in the fourth inning of a baseball game Friday, May 14, 2021, in Denver. (AP PhotoDavid Zalubowski)

Hampson hit a solo homer in the seventh before Eugenio Suarez launched a two-run shot off Yency Almonte in the top of the eighth.

Daniel Bard pitched the ninth for his fourth save. 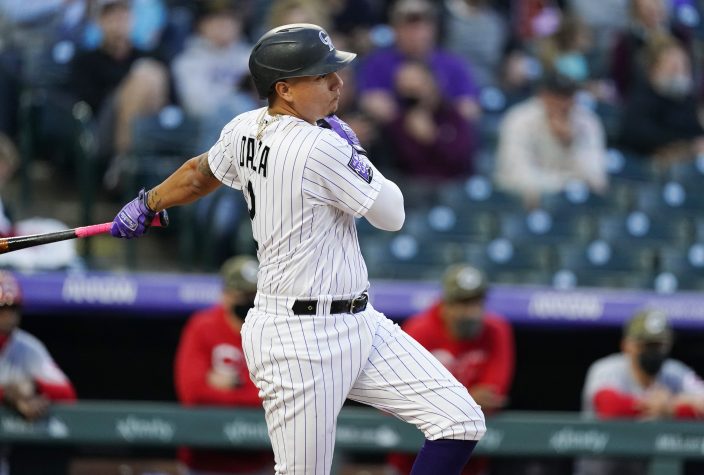 Colorado Rockies' Yonathan Daza connects for an RBI-single of Cincinnati Reds starting pitcher Wade Miley in the third inning of a baseball game Friday, May 14, 2021, in Denver. (AP PhotoDavid Zalubowski)

Blackmon exited for a pinch-runner in the fourth, but no reason for his departure was announced.

Daza drove in three runs and Josh Fuentes had two hits and two RBIs for Colorado.

Reds: OF Nick Senzel was out of the lineup after bruising his heel Thursday. Manager David Bell said Senzel is considered day to day. ... 1B Mike Moustakas was in the lineup after being pulled from Thursday night’s game due to a shoulder issue. 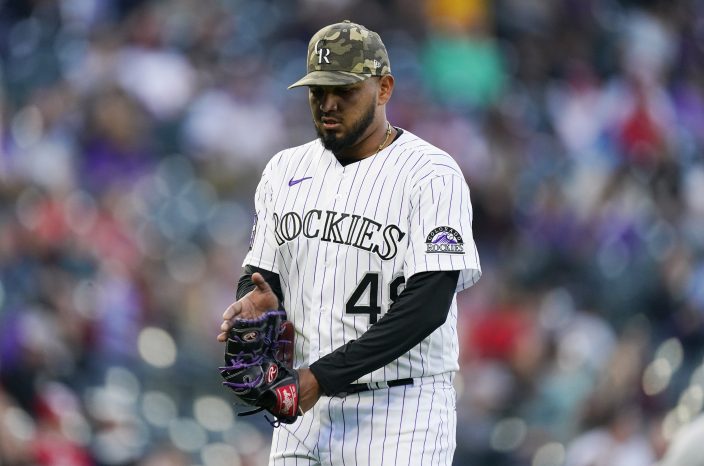 Colorado Rockies starting pitcher German Marquez hits his glove after giving up two runs to the Cincinnati Reds in the third inning of a baseball game Friday, May 14, 2021, in Denver. (AP PhotoDavid Zalubowski)

Rockies: Placed 1B Matt Adams on the 10-day injured list with a bruised right shin sustained Wednesday against San Diego. Colorado recalled RHP Justin Lawrence from Triple-A Albuquerque. ... OF Raimel Tapia was scratched from the lineup with a left thumb issue.

Cincinnati designated RHP Sal Romano for assignment and claimed RHP Michael Feliz off waivers from the Pittsburgh Pirates. The Reds also recalled RHP Art Warren from the taxi squad. Romano had been with the organization since he was drafted in the 23rd round in 2011. 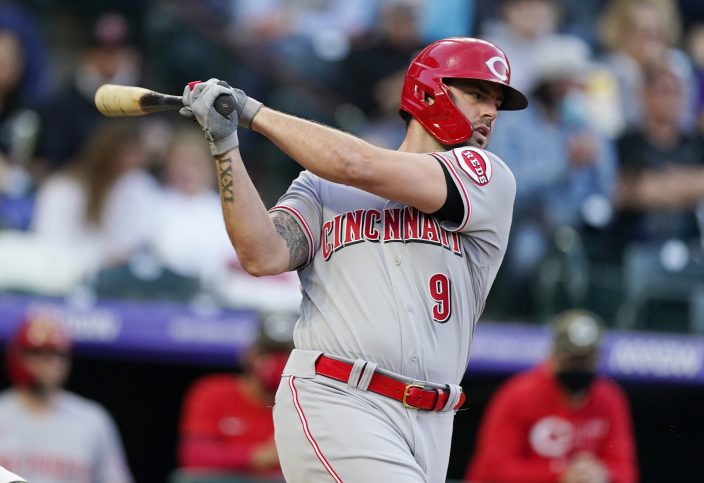 Bell said Feliz will join the team in a few days.