Joe Musgrove got through five innings for his first victory since throwing a no-hitter on April 9, and San Diego beat St. Louis 5-4 Friday night in the first meeting between the teams since the Padres eliminated the Cardinals from the playoffs last year.

Musgrove (3-4) had lost four decisions in five starts since pitching the first no-hitter in Padres history at Texas. He held the Cardinals to one run and five hits while striking out five and walking four.

Mark Melancon worked the ninth for his major league-leading 13th save in as many chances, allowing Nolan Arenado's solo homer with two outs, his seventh. 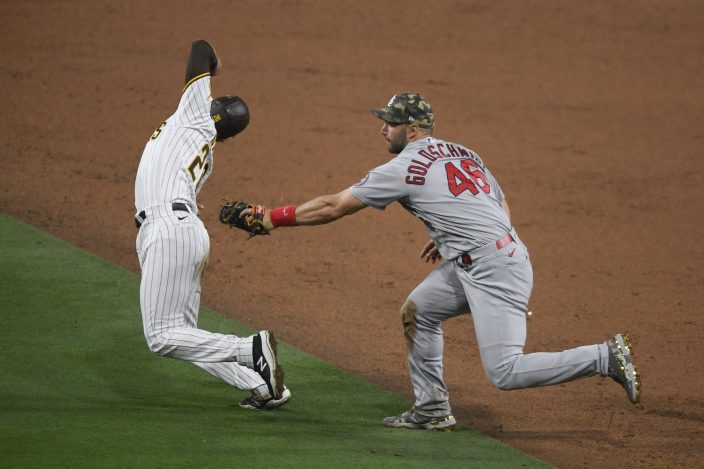 San Diego Padres' Austin Nola (26) tries to avoid the tag of St. Louis Cardinals first baseman Paul Goldschmidt (46) during the third inning of a baseball game Friday, May 14, 2021, in San Diego. Nola was tagged out on the play. (AP PhotoDenis Poroy)

San Diego had only four hits but drew 12 walks against five Cardinals pitchers.

The Padres beat the Cardinals 2-1 in the wild-card round last season before being swept in the NL Division Series by the eventual World Series champion Los Angeles Dodgers.

Musgrove got into and out of trouble in three straight innings. 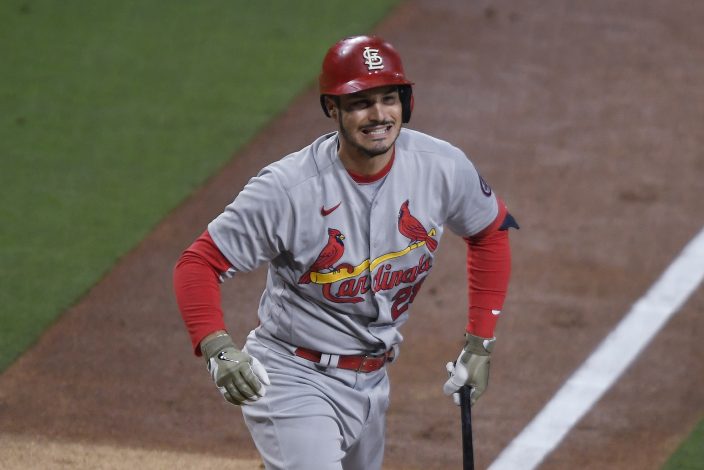 St. Louis Cardinals' Nolan Arenado reacts after taking strike during the third inning of the team's baseball game against the San Diego Padres on Friday, May 14, 2021, in San Diego. Arenado went on to hit into an inning-ending double play. (AP PhotoDenis Poroy)

In the third, he loaded the bases with one out on a single and consecutive walks before getting Arenado to ground into a slick double play started by rookie second baseman Tucupita Marcano.

The big right-hander allowed Yadier Molina’s leadoff double in the fourth before striking out the side sandwiched around an intentional walk to Harrison Bader. Musgrove loaded the bases again in the sixth but all the Cardinals got out of it was a sacrifice fly by Molina.

Manny Machado drove in two runs for San Diego, on a double in the first and a single in the sixth, scoring Trent Grisham both times. 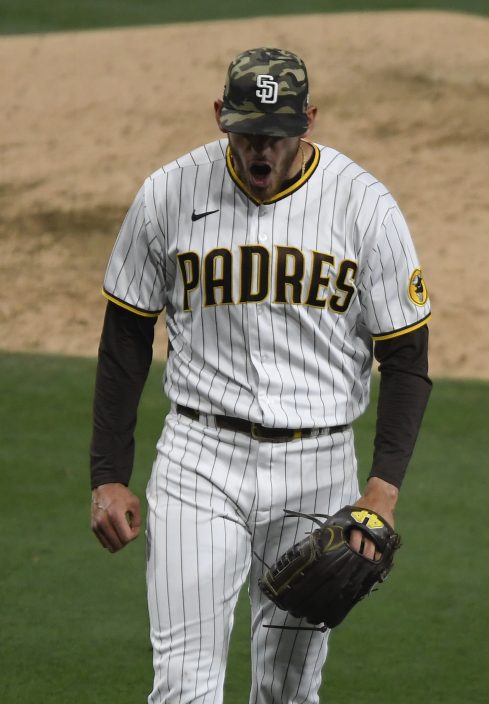 San Diego Padres starting pitcher Joe Musgrove reacts after getting the final out in the third inning of a baseball game against the St. Louis Cardinals, Friday, May 14, 2021, in San Diego. (AP PhotoDenis Poroy)

The Padres scored two runs in the third without the benefit of a hit to take a 3-0 lead. Johan Oviedo walked the first three batters — Machado, Jake Cronenworth and Tommy Pham — to load the bases and made way for Jake Woodford. Brian O'Grady hit a sacrifice fly and Austin Nola was hit by a pitch to load the bases again. Marcano followed with an RBI grounder.

Oviedo (0-2) allowed three runs and two hits, walked five and struck out none.

Padres rookie Kim Ha-seong started a spectacular double play to end the sixth. Filling in for shortstop Fernando Tatis Jr., who's out following a positive COVID-19 test, Kim fielded Tommy Edman's bouncer as he stepped on second to force Bader, sidestepped the oncoming baserunner and made a leaping throw to first to get Edman. 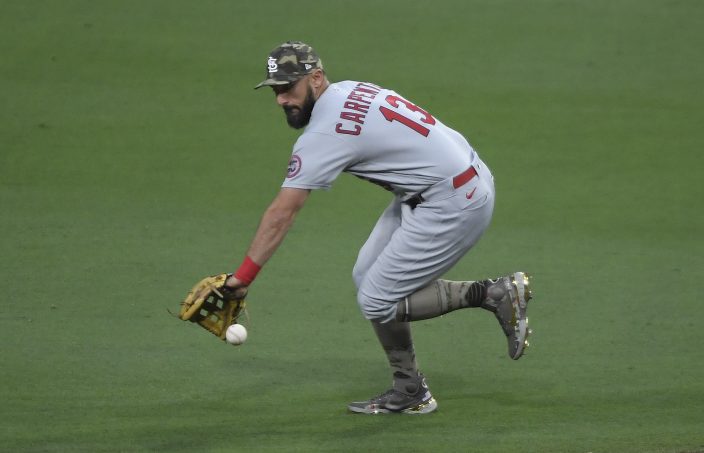 St. Louis Cardinals' Matt Carpenter (13) makes a stop on a ball hit by San Diego Padres' Jake Cronenworth during the first inning of a baseball game Friday, May 14, 2021, in San Diego. Carpenter got the out at first base. (AP PhotoDenis Poroy)

Tyler O'Neill hit a two-run homer for the Cardinals off Emilio Pagán in the eighth. Padres: Placed LHP Drew Pomeranz on the 10-day IL, retroactive to May 10, with a left shoulder impingement and selected the contract of INF/OF Ivan Castillo from Triple-A El Paso.

RHP Adam Wainwright (2-3, 3.80 ERA) starts for the Cardinals in the middle game of the series against RHP Chris Paddack (1-3, 4.78). Wainwright allowed two runs and six hits in Game 2 of the first-round playoff series at San Diego last season, getting a no-decision in the 11-9 loss.