Kris Letang has never missed the playoffs during his 15-year career. Still, the Pittsburgh Penguins defenseman knows not all postseason opportunities are equal.

“Sometimes you have that feeling inside you like ‘This year is a good year,’ like you have a good team,” Letang said.

Something Letang believes this edition of the Penguins are following an eventful regular season in which they navigated a stream of injuries to high-profile players on their way to their first division title in seven years. 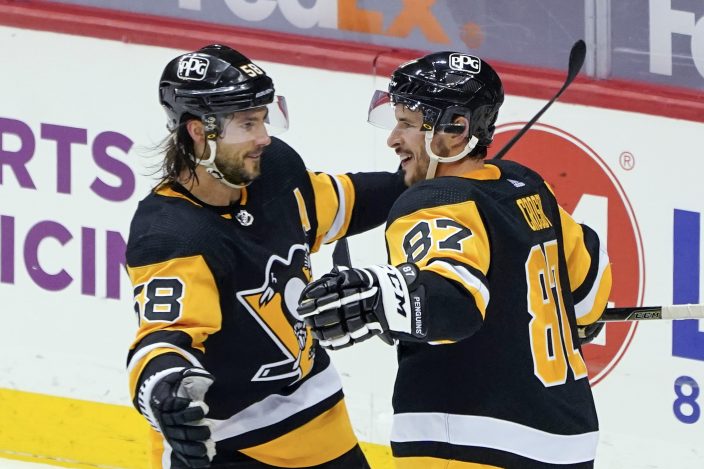 FILE - In this March 15, 2021, file photo, Pittsburgh Penguins' Sidney Crosby (87) celebrates with Kris Letang (58) after scoring against the Boston Bruins during the first period of an NHL hockey game in Pittsburgh. The Penguins and Islanders meet in Game 1 of their opening-round series on Sunday. The Islanders swept Pittsburgh in the first round of the playoffs in 2019. (AP PhotoKeith Srakocic)

Good vibes in Pittsburgh, however, can vanish quickly, particularly when the New York Islanders are involved. The Islanders swept the Penguins in the first round two years ago. A rematch awaits on Sunday when Pittsburgh hosts New York in Game 1 of the best-of-seven series.

Islanders coach Barry Trotz, who has won each of his last two series against Pittsburgh, cautioned against drawing a direct line between what happened in 2019 and what will happen over the next two weeks.

“It seems like a decade ago, that playoff series," Trotz said. “I thought (the Penguins) played, probably, consistent play through the whole year. They had a tough schedule at the start, and they were able to battle through it. They got a good hockey team, there’s no question.” 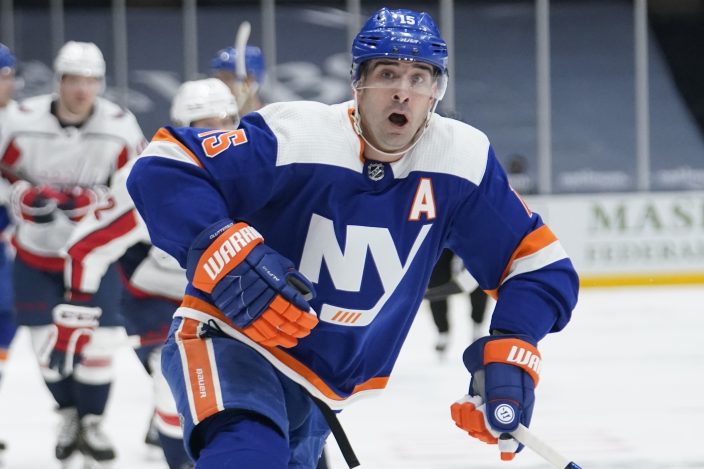 FILE - In this Saturday, April 24, 2021, file photo, New York Islanders' Cal Clutterbuck (15) skates during the second period of an NHL hockey game against the Washington Capitals in Uniondale, N.Y. The Penguins and Islanders meet in Game 1 of their opening-round series on Sunday. The Islanders swept Pittsburgh in the first round of the playoffs in 2019.(AP PhotoFrank Franklin II, File)

The Penguins won six of the eight meetings between the two clubs during the regular season, including all four at PPG Paints Arena. The results, however, could be a bit of a misnomer. Five of the games were decided by just one goal.

And for all of Pittsburgh's star power, it's the Islanders who have put together deeper playoff runs lately. New York advanced to the second round in 2019 and reached the Eastern Conference finals in the bubble last summer.

“You know it’s going to be hard, but you know that if you go out there and do your job and play the way that you know to play that you give yourself a chance to actually do it,” Islanders winger Cal Clutterbuck said. “That creates, you know, a fire in guys when you know you’ve got the team to do it and all you have to do is go out there and do it, and you give yourself a chance.”

New York goaltenders Semyon Varlamov and Ilya Sorokin combined for an NHL-best 10 shutouts. Varlamov has a decided edge over Pittsburgh's Tristan Jarry when it comes to understanding the rhythm and pressure of the postseason. Varlamov has appeared in 46 playoff games during his 13-year career. Jarry? Just one.

“Varly’s low maintenance and he’s been around a bit so there is something to be said a little bit with the experience,” Trotz said. “He’s calm, he’s had some experiences, good and bad, in the playoffs.”

The Penguins acquired veteran forward Jeff Carter from Los Angeles at the trade deadline confident there was enough life left in the 36-year-old's legs to make a difference.

They weren't wrong. Carter finished with a flourish, scoring nine goals in 14 games since his arrival, including the first four-goal game of his 16-year NHL career. The two-time Stanley Cup winner gives Pittsburgh depth down the middle behind captain Sidney Crosby and longtime star Evgeni Malkin.

The Penguins have been a fixture in the postseason for going on two decades, the longest active streak in major North American professional sports. Yet time may be running out for the core of Crosby, Malkin and Letang, all of whom are in their mid-30s.

The number of chances they might have left are dwindling. And while Crosby says it's not something they think about, Letang admitted it's also difficult to ignore.

"Do we think about our age and the fact it’s one more chance? Yes. Of course,” he said. “But as a hockey player, you enter that dance for the (Cup), it’s a chance. You might not see another one. So you have to treat it like it’s the last one.”

Pittsburgh had more success than most against the Islanders during the regular season — averaging 3.75 goals in eight games — but the Penguins remain wary of how tight space becomes at this time of year, especially against one of the league's stingiest teams.

The key is staying patient. Press and the Islanders have no problem turning your mistakes into a puck in the back of your net, a formula they perfected while holding Pittsburgh to just six goals in four games during their 2019 playoff meeting.

“I mean, the structure they have is really effective because they all buy into it,” Letang said. “As far as their talent, we know ... they have all the skill in the world to make you pay. That’s why they’re a dangerous team.”

Jarry rebounds with 39 saves, Pens even series with Isles