Breanna Stewart had 28 points and 13 rebounds, Jewell Loyd added 22 points and the Seattle Storm opened defense of their WNBA title with a 97-83 victory over the Las Vegas Aces on Saturday.

The rematch of last year’s WNBA Finals in the Florida bubble was a celebration for the Storm complete with a ring ceremony and championship banner unveiling as Seattle tries to become the first team to repeat as WNBA champs since Los Angeles in 2001 and 2002.

Even with an overhauled roster, Seattle looked the part of a championship contender in the opener. Seattle trailed by as many as nine in the opening quarter, but outscored Las Vegas 45-31 in the middle two quarters to take control. 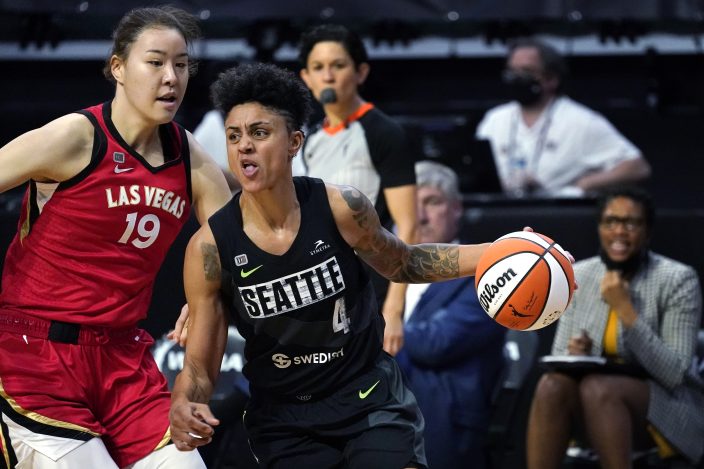 A’ja Wilson, last year’s league MVP, led Las Vegas with 24 points and Liz Cambage added 16 in her return to the WNBA after sitting out last season. 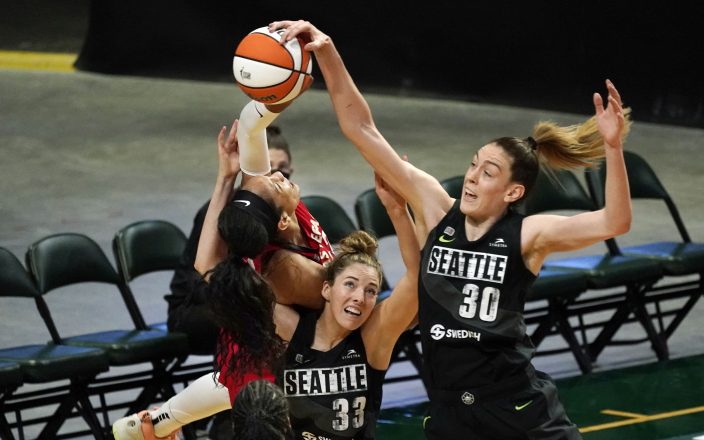 Seattle Storm's Katie Lou Samuelson (33) and Breanna Stewart (30) surround Las Vegas Aces' A'ja Wilson as they vie for the ball in the first half of a WNBA basketball game Saturday, May 15, 2021, in Everett, Wash. The Storm won 97-83. (AP PhotoElaine Thompson)

After spending 13 seasons with the Los Angeles Sparks, Parker, a Naperville, Illinois native, joined the Sky in free agency in the offseason.