The horse's owners, Diane and John Fradkin, just didn't think that was the right move. Instead, they wanted to point to the second leg of the Triple Crown. No one will ever know what might have happened if Rombauer had been allowed to go to Churchill Downs.

At Pimlico on Saturday, the 11-1 shot showed up right on time. Rombauer came from behind to win the Preakness with a stirring stretch run that carried him past front-runners Midnight Bourbon and Medina Spirit — the Bob Baffert-trained horse who tested positive for a steroid after winning the Kentucky Derby. 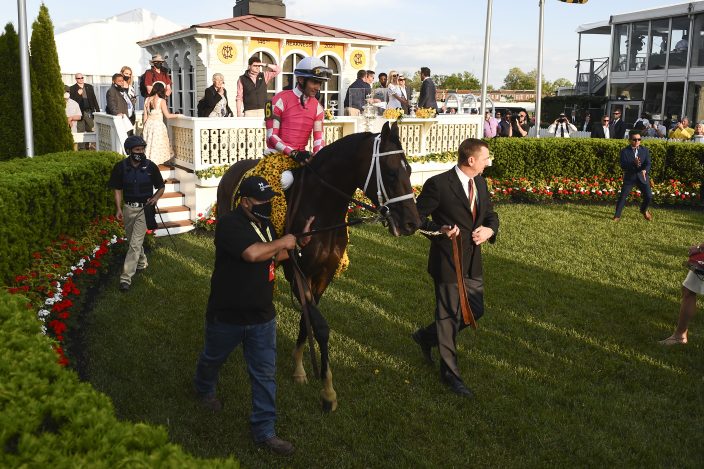 “Just goes to show you that small players in the game can be successful, as well," said McCarthy, his voice choked with emotion.

This was his first Triple Crown entry, let alone a winner. Same for the Fradkins, who generally sell the horses they breed rather than race them.

And it was the first time crossing the wire first aboard a Triple Crown horse for French jockey Flavien Prat — although he wound up as the Kentucky Derby winner in 2019 after arriving second with long-shot Country House behind Maximum Security, who was disqualified.

Said Prat about this first-place result: "Of course it’s a lot different.”

“He has no quit in him,” McCarthy said about Rombauer, who earned a fees-paid entry into the Preakness by winning the lower-level $100,000 El Camino Real Derby at California's Golden Gate Fields in February. “He’s made me look smart today.”

Medina Spirit was another two lengths back after entering the race as a 2-1 favorite and taking the lead out of the gate before a crowd capped at 10,000 spectators, instead of the usual 100,000-plus — a year after all fans were banned and the event was moved from May to October because of the coronavirus pandemic.

One of the first to congratulate McCarthy afterward was his mentor, Todd Pletcher, the seven-time Eclipse Award winner as trainer of the year whose career record at the Preakness dropped to 0 for 10 with Unbridled Honor's sixth-place finish in a 10-horse field.

“Everything we do sort of channels through what we did when I worked there. I try to always refer to kind of something like he would do,” McCarthy said about Pletcher. “Strange to believe I’ve won something that he hasn’t. I’m sure that won’t last for long, but means the world to me.”

Now the question becomes whether Rombauer will head to the Belmont in three weeks for the final leg of the Triple Crown.

Once again, there could be some debate: McCarthy wants to go; the Fradkins sounded far less convinced that it's the right move.

“I'd say it's a possibility,” John Fradkin said, “but it's probably a little less of a possibility than if we had run like a good third or something.”

He described his, um, conversations with McCarthy about the Kentucky Derby as “pretty heated.”

“I can understand why Michael wanted him to run, but I think he can understand why I didn't want him to run,” the owner said. “There's going to be a clash at times because I come at it from a total handicapping angle, and I'm not a horseman — as you could tell when I walked that horse to the winner's circle. Didn't know what I was doing.”

But are you second-guessing the choice to skip the Run for the Roses?

Diane Fradkin then chimed in with a joke: “We won the El Camino Real Derby. That was our Derby.”

Indians rally in 9th, top Mariners on throwing error in ...

César Hernández scored on a throwi ...