Anderson (3-1) cruised through the first six innings, mixing a 96 mph fastball, an effective changeup and an even slower curveball that kept the Brewers guessing.

The 23-year-old right-hander walked four and struck out four before the Brewers ended Anderson's bid in the seventh. Daniel Vogelbach blooped a leadoff single to center and Pablo Reyes followed with a double that chased Anderson. 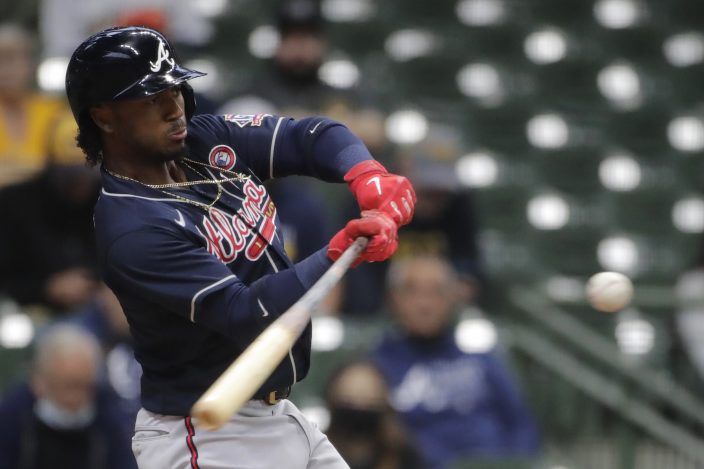 Atlanta Braves' Ozzie Albies hits an RBI double during the first inning of a baseball game against the Milwaukee Brewers Saturday, May 15, 2021, in Milwaukee. (AP PhotoAaron Gash) 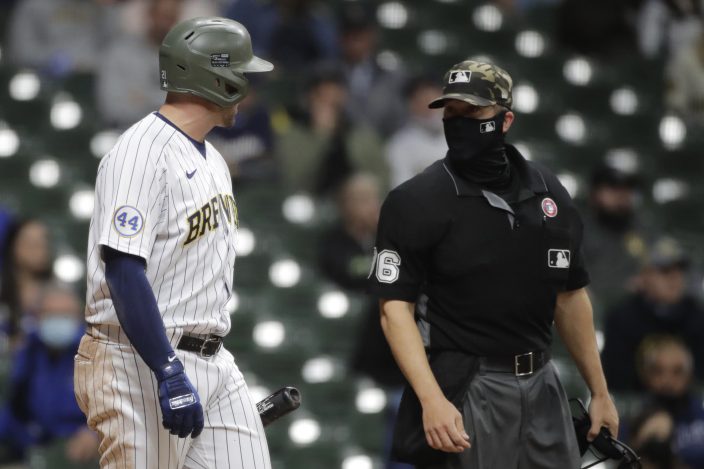 Milwaukee Brewers' Travis Shaw, left, argues with umpire Chris Segal during the fourth inning of the team's baseball game against the Atlanta Braves on Saturday, May 15, 2021, in Milwaukee. Shaw was ejected. (AP PhotoAaron Gash)

Freeman homered in the second. William Contreras homered off Hoby Milner leading off the Atlanta eighth.

Travis Shaw was called out on strikes to end the Brewers fourth. He turned to bark at plate umpire Chris Segal who listened briefly and then tossed him. Reyes. 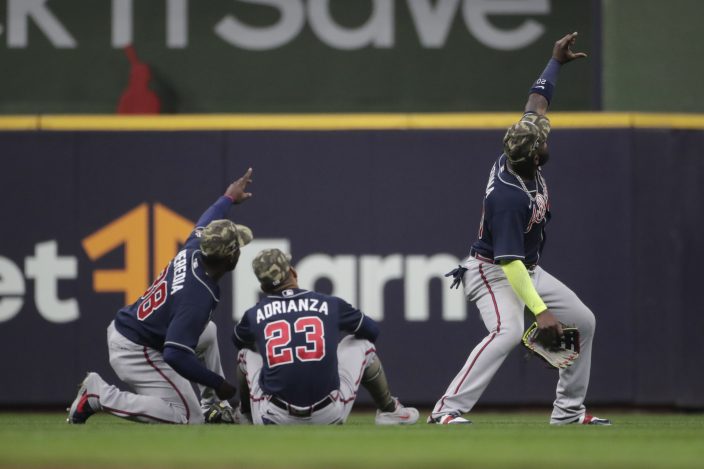 Atlanta Braves' Marcell Ozuna, right, poses with Ehire Adrianza (23) and Guillermo Heredia (38) after the the team's baseball game against the Milwaukee Brewers on Saturday, May 15, 2021, in Milwaukee. (AP PhotoAaron Gash)

Ozzie Albies doubled home Freeman, and Dansby Swanson followed with a sacrifice fly in the first. Freeman capped the second with his 10th home run.

Braves: OF Ronald Acuña Jr. missed his second consecutive game after injuring his left ankle while trying to beat out a grounder on Thursday against Toronto. Manager Brian Snitker said that Acuña made some progress. 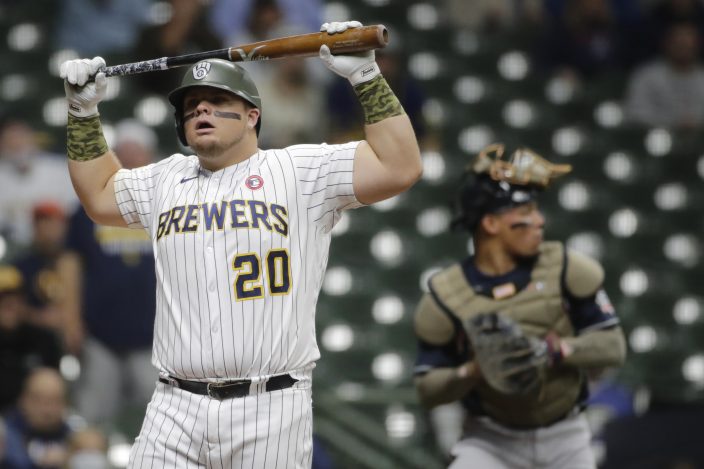 Milwaukee Brewers' Daniel Vogelbach reacts after striking out during the first inning of the team's baseball game against the Atlanta Braves on Saturday, May 15, 2021, in Milwaukee. (AP PhotoAaron Gash)

Brewers: OF Christian Yelich continued a rehab assignment with Triple-A Nashville on Saturday night. “Every day’s a little bit more,” manager Craig Counsell said. “We’ll see how he reacts to it.” Yelich was hitless in two at-bats Friday night. The 2018 NL MVP has played just one game for Milwaukee since April 11 due to a lower back strain.

The Braves returned OF Guillermo Heredia from his rehab assignment, reinstated him from the 10-day injured list (right hamstring inflammation) and started him in center field. … INF Johan Camargo was optioned to Triple-A Gwinnet. … Veteran C Jonathan Lucroy has been signed to a minor league contract. The move comes one day after C Tyler Flowers announced his retirement.

The Brewers selected Milner from Triple-A Nashville and optioned LHP Eric Lauer there.

NATO nations ready to jointly respond to attacks in spa ...

NATO leaders on Monday will expand ...