Carlos Correa and Kyle Tucker each homered to help Luis Garcia earn his first career win as the Houston Astros held on to beat the Texas Rangers 6-5 on Saturday night for their fifth straight win.

Correa capped a four-run first with a two-run homer to right as the Astros got to Texas starter Dane Dunning (2-3). Alex Bregman also had a two-run single in the inning.

Tucker upped the lead to 6-1 with a two-run shot to right in the seventh. 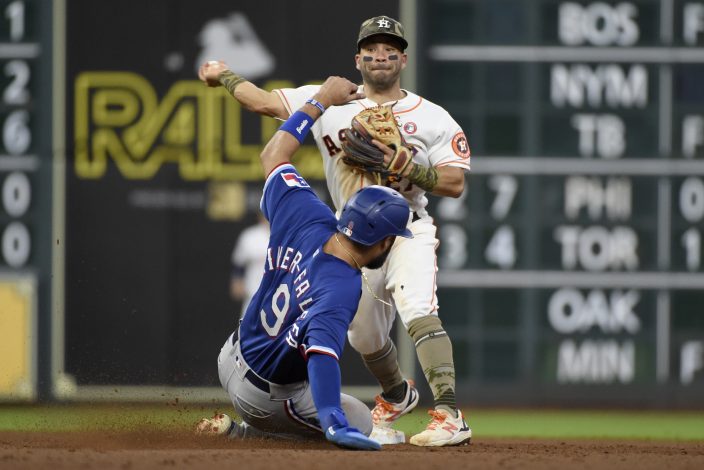 Garcia (1-3) permitted one run and five hits with five strikeouts in five innings. Garcia has allowed three runs or fewer in each of his six starts this season.

Ryan Pressly pitched a perfect ninth for his seventh save of the season. 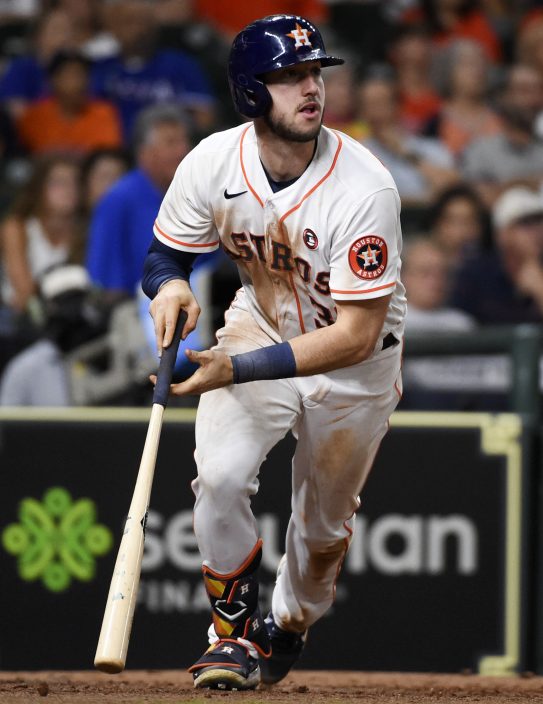 Houston Astros' Kyle Tucker watches his two-run home run during the seventh inning of a baseball game against the Texas Rangers, Saturday, May 15, 2021, in Houston. (AP PhotoEric Christian Smith)

The Rangers cut the lead to 6-5 with a four-run eighth. Joey Gallo, who finished with three hits, hit a three-run homer, and Andy Ibáñez had an RBI groundout to score David Dahl.

The Rangers have lost five straight.

Nate Lowe had a sacrifice fly in the first. 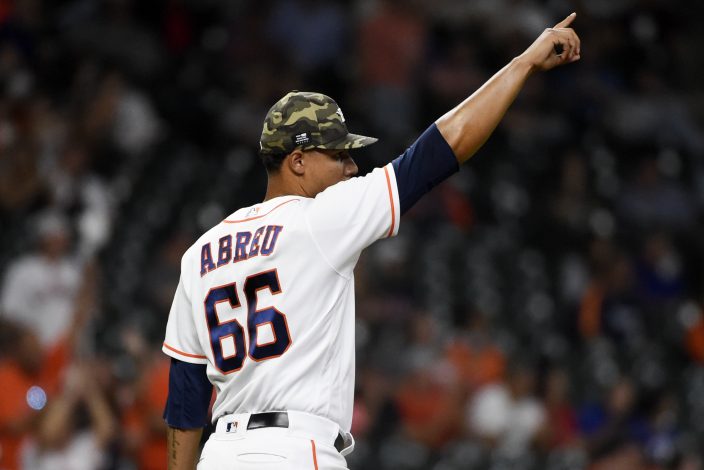 Dunning yielded four runs and seven hits with three strikeouts and three walks in four innings. It was the third start this season he’s allowed at least four runs. 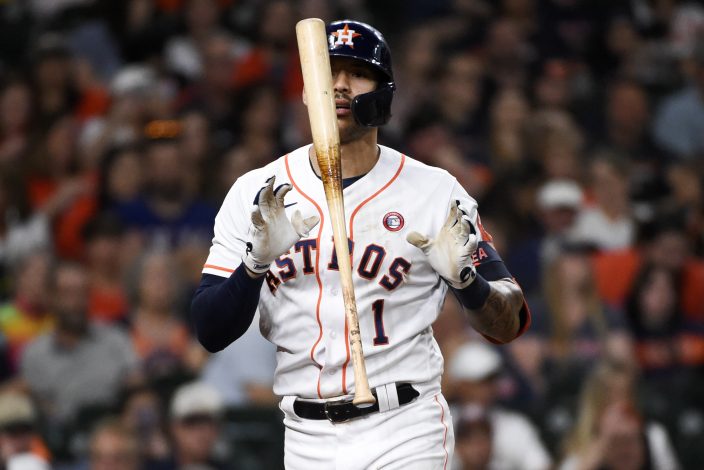 Houston Astros' Carlos Correa reacts after striking out during the third inning of a baseball game against the Texas Rangers, Saturday, May 15, 2021, in Houston. (AP PhotoEric Christian Smith)

Astros: RHP Jose Urquidy (posterior shoulder discomfort) will not pitch in the Astros’ next series in Oakland, manager Dusty Baker said. Urquidy, who left Wednesday’s start with the injury, would have been slated to pitch on Tuesday. “It’s no secret, Urquidy is not going to pitch (against Oakland),” Baker said.

Texas selected the contract of RHP Hunter Wood from Triple-A Round Rock and optioned Wes Benjamin to Round Rock. To make room for Wood on the 40-man roster, C Jack Kruger was designated for assignment. Wood surrendered two runs in 1 1/3 innings of relief on Saturday. 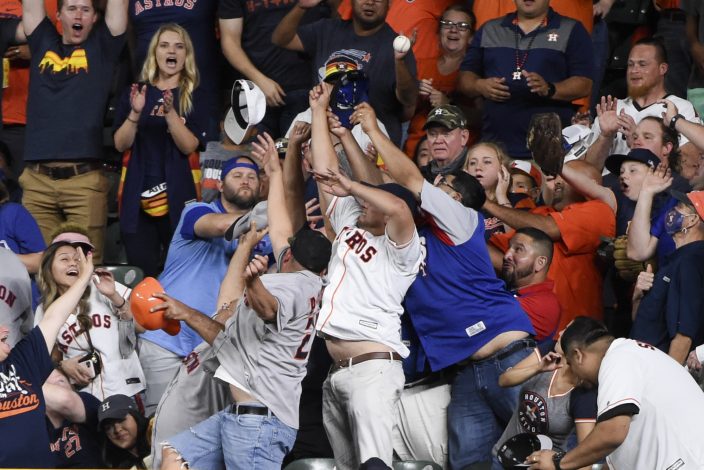 Fans try to catch the home run ball of Houston Astros' Kyle Tucker during the seventh inning of a baseball game against the Texas Rangers, Saturday, May 15, 2021, in Houston. (AP PhotoEric Christian Smith)

Rangers: RHP Kyle Gibson (3-0, 2.28) looks to continue his solid start of the season as he takes the mound on Sunday in the finale of the four-game series. Gibson has allowed one or fewer runs in five of his last seven starts.

Astros: RHP Lance McCullers Jr. (3-1, 3.10) makes his eighth start of the year Sunday looking for his third straight win. McCullers struck out nine and allowed one run in eight innings in a win over the Angels on Tuesday. 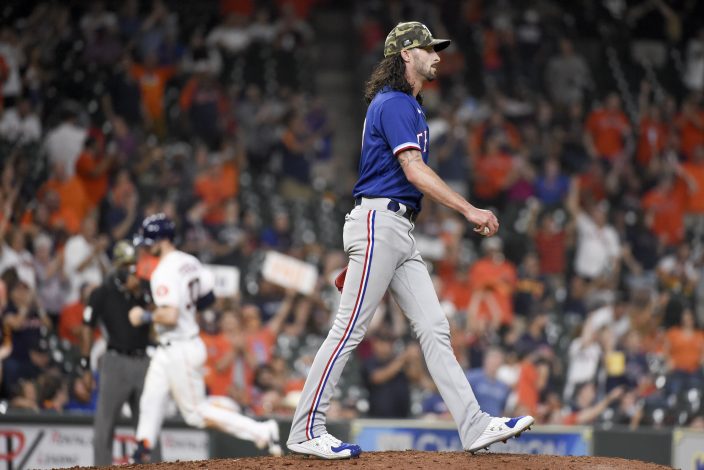 Texas Rangers relief pitcher Hunter Wood, right, walks off the mound as Houston Astros' Kyle Tucker, back left, rounds the bases after hitting a two-run home run during the seventh inning of a baseball game, Saturday, May 15, 2021, in Houston. (AP PhotoEric Christian Smith) 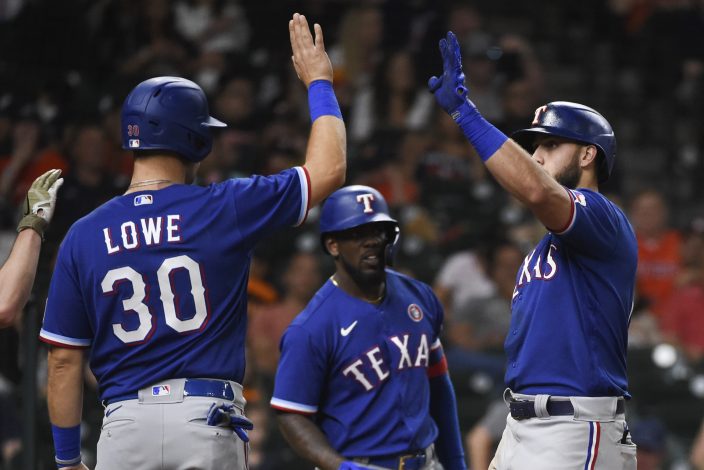 Texas Rangers' Joey Gallo, right, celebrates his three-run home run with Nate Lowe (30) during the eighth inning of a baseball game against the Houston Astros, Saturday, May 15, 2021, in Houston. (AP PhotoEric Christian Smith)