Mitch Haniger hit his 12th home run, Justus Sheffield picked up a win against the team that drafted him and the Seattle Mariners beat the Cleveland Indians 7-3 on Saturday night.

Dylan Moore added a three-run homer in the fourth inning off Triston McKenzie to break open a close game and give Sheffield (3-3) the win in a showdown of former Indians first-round draft picks.

Sheffield worked out of jams in the second, fourth and sixth innings –- helping turn a double play in the second -- and overcame three doubles by José Ramírez. He struck out two, walked two and scattered five hits in six innings. 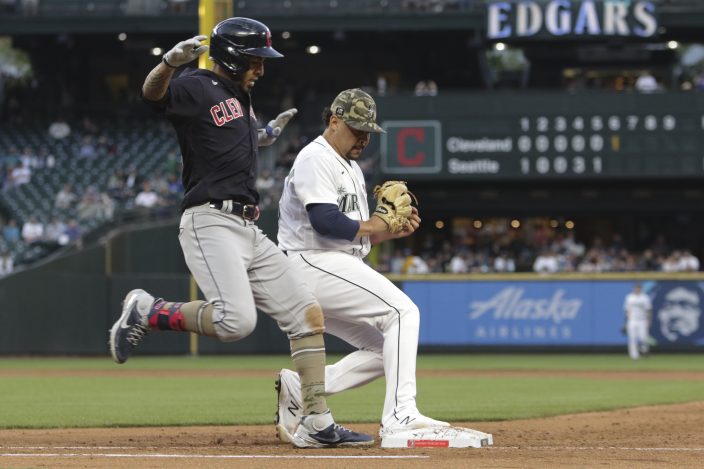 Seattle Mariners starting pitcher Justus Sheffield beats Cleveland Indians' Eddie Rosario to first base for an out during the sixth inning of a baseball game Saturday, May 15, 2021, in Seattle. (AP PhotoJason Redmond)

The Mariners have won two straight after a string of five losses.

Haniger, a former All-Star who missed most of the last two years with injuries, hit a solo shot in the first inning to join Atlanta’s Ronald Acuña Jr. for the major league lead with his 12th homer. He added a single and a run in the fifth inning to make it 5-0, helping chase McKenzie (1-2).

Sheffield, a 25-year-old left-hander, was taken in the first round by the Indians in 2014, and McKenzie was drafted the next year. Cleveland traded Sheffield to the New York Yankees in 2016 in a deal for Andrew Miller. 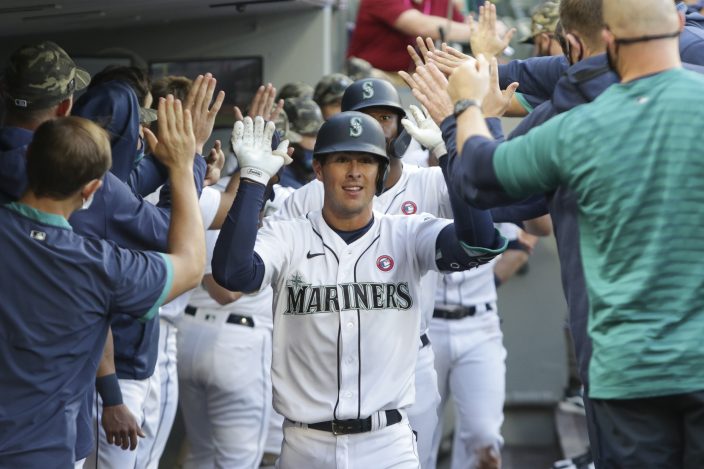 Seattle Mariners' Dylan Moore celebrates in the dugout after his three-run home run during the fourth inning of the team's baseball game against the Cleveland Indians, Saturday, May 15, 2021, in Seattle. (AP PhotoJason Redmond)

Reliever Drew Steckenrider pitched a perfect seventh with two strikeouts to extend is streak to 13 1/3 innings with just one earned run allowed. Donovan Walton added a two-run triple in the eighth for the Mariners.

Harold Ramirez hit a solo homer for the Indians in the ninth. 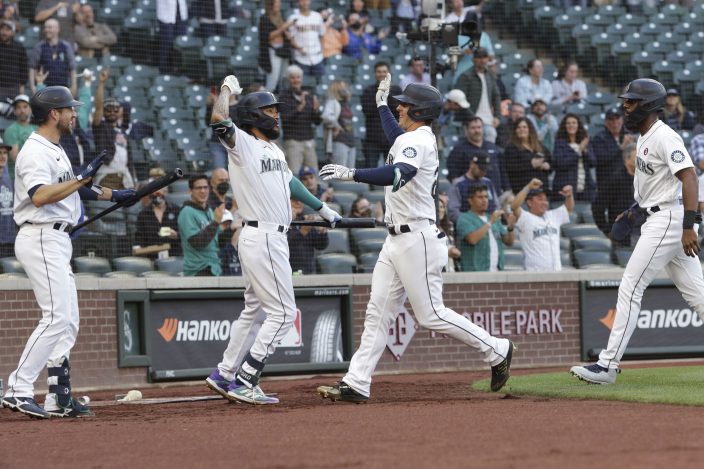 Seattle Mariners' Dylan Moore, second from right, celebrates with Tom Murphy, J.P. Crawford and Kyle Lewis, from left, after Moore's three-run home run during the fourth inning of the team's baseball game against the Cleveland Indians, Saturday, May 15, 2021, in Seattle. (AP PhotoJason Redmond)

A day after hitting a home run and two doubles, prized Mariners prospect Jarred Kelenic went 0 for 5 and struck out three times in his third major league game. The 21-year-old rookie spiked his helmet and glared at the plate umpire after his third strikeout, which came on three pitches, including two called strikes.

Indians: LF Eddie Rosario returned to the lineup after taking a pitch to the foot in Friday night’s loss to the Mariners. He was pulled in the ninth for a pinch-runner, but manager Terry Francona said he suffered no serious damage. 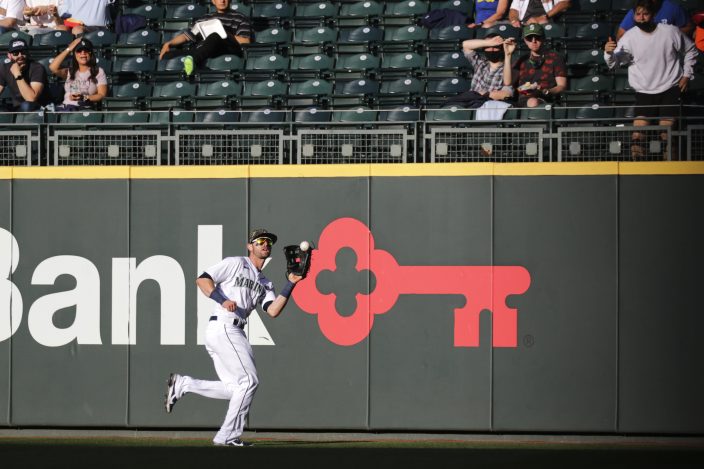 Seattle Mariners right fielder Mitch Haniger makes the catch for the out on Cleveland Indians' Cesar Hernandez during the third inning of a baseball game Saturday, May 15, 2021, in Seattle. (AP PhotoJason Redmond)

Mariners: INF/DH Ty France (wrist) will wear a splint up to five days and is taking anti-inflammatory drugs while on the 10-day injured list, manager Scott Servais said. France took a pitch to the forearm on April 28, and that may have eventually caused the soreness in the wrist, Servais said.

Indians: RHP Shane Bieber (4-2, 2.95) closes out the series for Cleveland. He’s given up two earned runs in 13 2/3 career innings against the Mariners and looks to extend his strikeout streak of at least eight in a record 20 straight games. 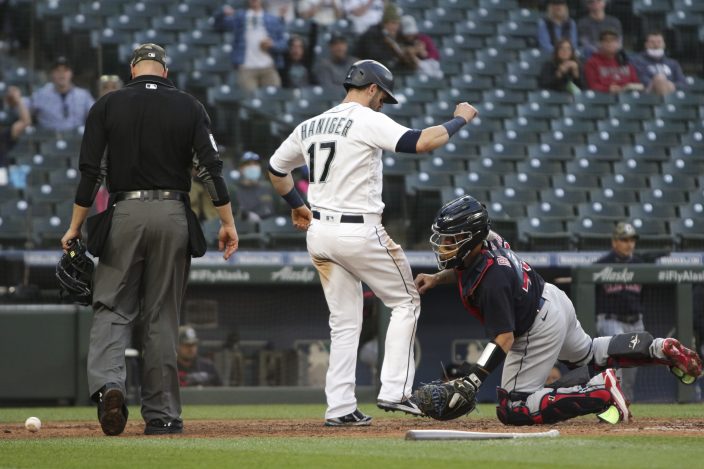 Seattle Mariners' Mitch Haniger is safe at home on a sacrifice fly by Jose Marmolejos as Cleveland Indians catcher Rene Rivera is unable to make the tag during the fifth inning of a baseball game Saturday, May 15, 2021, in Seattle. (AP PhotoJason Redmond)

Mariners: Servais said he hadn’t yet decided on a starter for Sunday’s series finale in what will likely be a bullpen start. 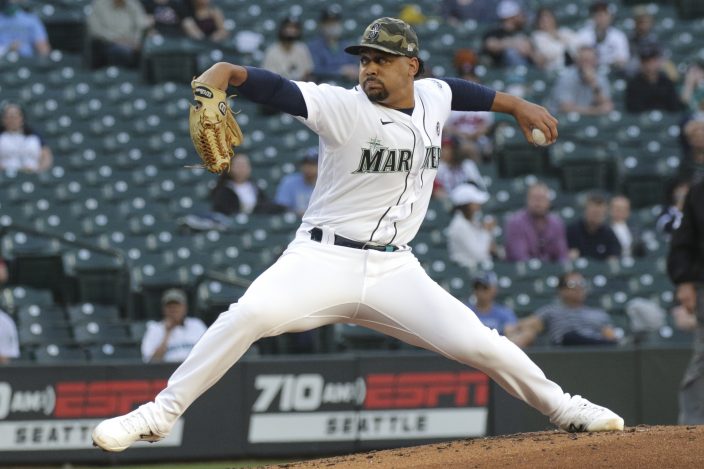