The 57-nation Organization of Islamic Cooperation opened an emergency meeting Sunday over the heavy fighting between Israel and the Gaza Strip’s militant Hamas rulers, the first major move among Mideast nations still grappling with how to address the conflict.

While the Arab League and organizations like the Saudi-based OIC have maintained their view that the Palestinians should have their own independent state, Israel recently has reached recognition deals with several of its members. That, as well as the concerns of some nations over Hamas, has seen a somewhat-muted response to the attacks as opposed to the full-throated response of decades past.

Palestinian Foreign Minister Riad Malki of the Palestinian Authority, which administers autonomous enclaves in the Israeli-occupied West Bank, decried what he called Israel's “cowardly attacks” at the start of the meeting. 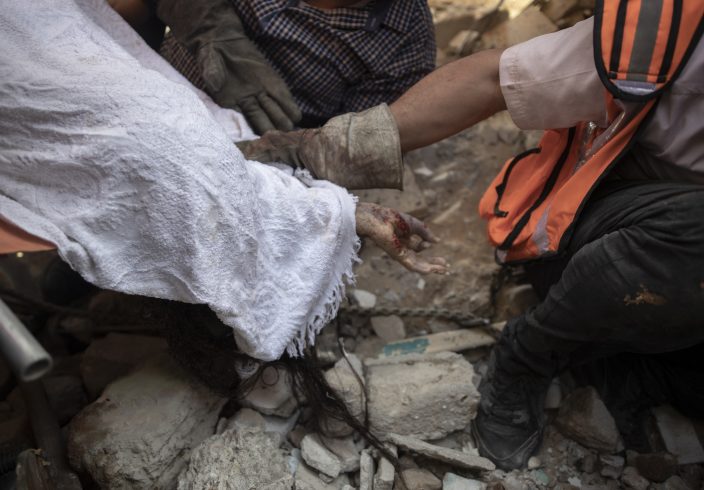 Palestinian rescuers remove the covered body of a woman from under the rubble of a destroyed house following Israeli airstrikes in Gaza City, Sunday, May 16, 2021. The airstrikes flattened three buildings and killed at least 26 people Sunday, medics said, making it the deadliest single attack since heavy fighting broke out between Israel and the territory's militant Hamas rulers nearly a week ago. (AP PhotoKhalil Hamra)

“We need to tell Allah that we will resist to the last day,” he said. “We are facing a long-term occupation. that’s the base of the problem. Crimes are committed against the Palestinians without consequences.”

However, Malki's Palestinian Authority has no control over Hamas and the Gaza Strip, where the militants seized power in 2007. 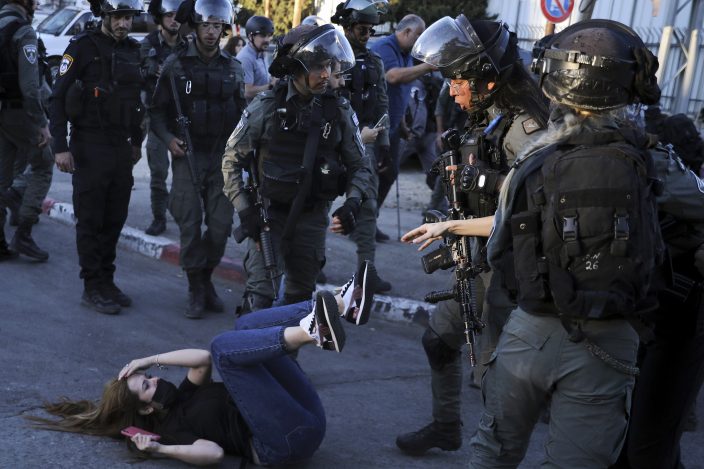 Israeli police scuffle with protesters in the Sheikh Jarrah neighborhood of east Jerusalem Saturday, May 15, 2021. The tensions began in east Jerusalem earlier this month, when Palestinians protested attempts by settlers to forcibly evict a number of Palestinian families from their homes. (AP PhotoMahmoud Illean)

“Israel alone is responsible for the recent escalation in East Jerusalem, the West Bank and Gaza,” Cavusoglu said. "Our warnings to Israel last week went unheeded.”

Across the Arabian Peninsula and Persian Gulf states, reactions to the fighting has been mixed. In Qatar, home to the Al-Jazeera satellite network, hundreds turned out late Saturday night to listen to a speech by Hamas’ top leader Ismail Haniyeh. He now splits his time between Turkey and Qatar, both of which back Hamas, as does Iran.

“The resistance will not give in,” Haniyeh vowed as bodyguards stood behind him. He added that “resistance is the shortest road to Jerusalem” and that Palestinians will not accept anything less than a Palestinian state with Jerusalem as its capital. 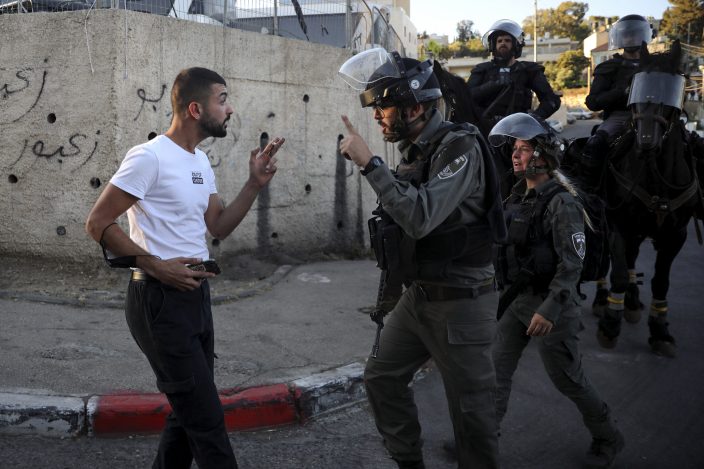 An Israeli Arab man argues with Israeli border police officer during a protest in the Sheikh Jarrah neighborhood of east Jerusalem, where several Palestinian families are under imminent threat of forcible eviction from their homes, Saturday, May 15, 2021. (AP PhotoMahmoud Illean)

Kuwait's parliament speaker reportedly spoke with Haniyeh on Saturday, as did Qatar's foreign minister. So too did Gen. Esmail Ghaani, the head of the expeditionary Quds Forces of Iran's paramilitary Revolutionary Guard.

Then there are Bahrain and the United Arab Emirates, two Gulf Arab states that reached recognition deals with Israel last year in the waning months of the Trump administration. Those nations, as well as Saudi Arabia, have reiterated their support of Palestinians obtaining their own independent state. However, government-linked media in those nations haven't been covering the current flare-up of violence nonstop like other networks in the region.

There are murmurs of dissent though. In the island nation of Bahrain, civil society groups signed a letter urging the kingdom to expel the Israeli ambassador over the violence. In the UAE, where political parties and protests are illegal, Palestinians in the workforces of Abu Dhabi and Dubai have expressed their anger quietly, worried about losing their residency permit. Some Emiratis also have expressed concerns. 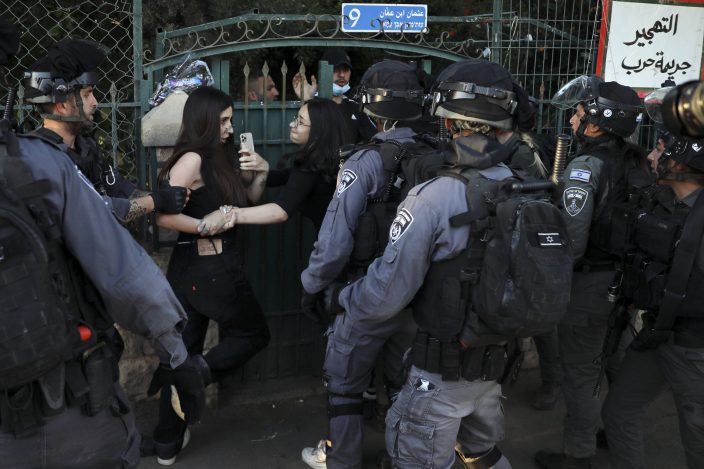 Israeli police scuffle with protesters in the Sheikh Jarrah neighborhood of east Jerusalem Saturday, May 15, 2021. The tensions began in east Jerusalem earlier this month, when Palestinians protested attempts by settlers to forcibly evict a number of Palestinian families from their homes. (AP PhotoMahmoud Illean)

“The region’s only democracy," tweeted the Emirati writer and political analyst Sultan Sooud Al Qassemi in writing about Israel's strike on a Gaza building that housed the offices of The Associated Press and Al-Jazeera.

“There are a few who have lost their moral compass and voiced support for Israel,” he said. “If there are half-hearted statements within our own family, how could we criticize others who (don't) take our words seriously?"

Hussein Ibish, a senior scholar at the Washington-based Arab Gulf States Institute, said most Gulf Arab leaders fear Hamas' rocket fire as "cynical, dangerous, unnecessarily provocative and endangering Israelis and Palestinians in Gaza alike.” That takes the pressure off those Gulf leaders to respond, unlike in other confrontations involving the Al-Aqsa mosque, Islam's third-holiest site in Jerusalem, or when Israeli settlers force Arab families out of their homes, he said.

“There won’t be much sympathy for what is widely viewed in the Gulf as Israel’s heavy-handed and disproportionate retaliation," Ibish wrote, "but it will be much easier for Gulf leaders and many citizens to regard the exchange as a tragic conflagration at the expense of ordinary people brought about by two leaderships over which they have neither control nor responsibility.”