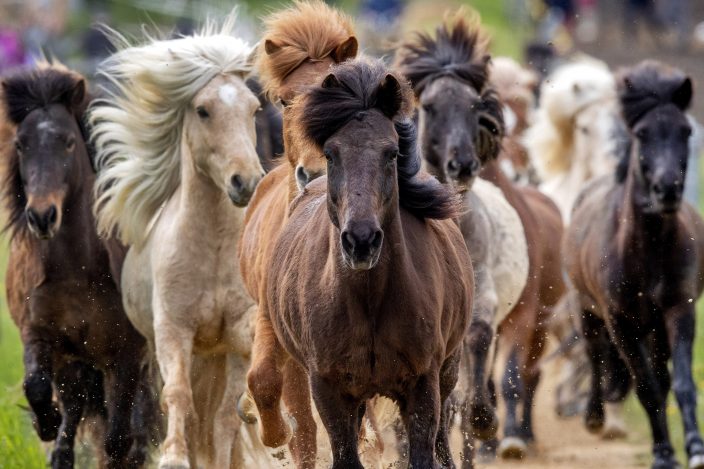 Icelandic horses run to their paddock after they leave their stables where they spent the winter at a stud farm in Wehrheim near Frankfurt, Germany, Sunday, May 16, 2021. (AP PhotoMichael Probst)

ISRAEL-PALESTINIANS-DIPLOMACY — The U.N. Security Council and Arab diplomats convene emergency meetings seeking to stop civilian bloodshed as Israeli warplanes carry out the deadliest single attacks yet in nearly a week of unrelenting Hamas rocket barrages and Israeli airstrikes. President Joe Biden gives no signs of pressuring Israel to agree to a cease fire despite new calls from some Democrats for the Biden administration to get more involved. By Ellen Knickmeyer. UPCOMING: 800 words, photos by 3 p.m.

VIRUS-OUTBREAK — Not everyone is giving up wearing a face mask despite the latest government guidance that means fully vaccinated Americans can uncover their faces in many cases. With more than a third of the U.S. population fully vaccinated, millions are deciding whether to continue wearing face masks, which were both a shield against infection and a point of heated political debate over the last year. People have myriad reasons for deciding to stop, or continuing to wear, a mask. By Jay Reeves. SENT: 940 words, photos, videos.

VIRUS-OUTBREAK-SCHOOL-TESTING — Children are having their noses swabbed or saliva sampled at school to test for the coronavirus in cities such as Baltimore, New York and Chicago. In other parts of the U.S., school districts are reluctant to check even students showing signs of illness for COVID-19. Education and health officials around the country have taken different approaches to testing students and staff members — and widely varying positions or whether to test them at all. By Heather Hollingsworth. SENT: 1,050 words, photos. This is the Monday Spotlight.

BIDEN-REFUGEES — President Joe Biden, under political pressure, agreed to admit four times as many refugees this budget year as his predecessor did, but resettlement agencies concede the number actually allowed into the U.S. will be closer to the record-low cap of 15,000 set by former President Donald Trump. By Julie Watson and Matthew Lee. SENT: 980 words, photos.

2020-CENSUS-DATA-QUALITY — The U.S. Census Bureau has released its first data-quality measurements from the 2020 census. An Associated Press review has found patterns that may point to red flags. In Alaska, West Virginia and other rural states, census takers relied more on neighbors and landlords for information about a home’s residents. In states with dense populations in the Mid-Atlantic region like New Jersey and New York, they were more likely to come away from a household without basic information on race, sex and ethnic background. By Mike Schneider. SENT: 830 words, photos.

ISRAEL-PALESTINIANS-REACTION — A league of Muslim nations demanded that Israel halt attacks killing Palestinian civilians amid heavy fighting between it and Hamas in the Gaza Strip, even as fissures between countries over their recognition of Israel emerged. SENT: 720 words, photos.

ISRAELI-PALESTINIANS-ASSOCIATED-PRESS — The Associated Press’ top editor called for an independent investigation into the Israeli airstrike that targeted and destroyed a Gaza City building housing the AP, broadcaster Al-Jazeera and other media, saying the public deserves to know the facts. SENT: 380 words, photo.

BRITAIN-ISRAEL-PALESTINIANS — British police were investigating videos posted on social media Sunday that appeared to show violent antisemitic language being shouted from a convoy of cars driving through London. SENT: 220 words.

EMIRATES-ISRAEL-TOURISM — Israel is promoting tourism in Dubai even amid a surge of airstrikes on Gaza City that killed at least 42 people in just the last day. That might seem a hard sell at a time when major airlines have suspended flights to Israel amid the clash with Hamas in Gaza and while the spread of coronavirus remains a threat. SENT: 760 words, photos.

ISRAEL-PALESTINIANS-PHOTO GALLERY — To the outside world, the scenes of rocket fire, bombing raids and angry protests in the Middle East this week may have looked familiar. To the people of Israel and especially the Gaza Strip, they were anything but routine. SENT: 450 words, photos.

Click here for more coverage of the Israel-Palestinian conflict.

VIRUS-OUTBREAK-MASKS — The head of the Centers for Disease Control and Prevention defended the decision to ease mask-wearing guidance for fully vaccinated people, stressing that increasing political pressure had nothing to do with the abrupt shift in guidelines. SENT: 550 words, photos.

VIRUS-OUTBREAK INDIA — Police are reaching out to villagers in northern India to investigate the recovery of bodies buried in shallow sand graves or washed up on the Ganges River banks, prompting speculation on social media that they’re the remains of COVID-19 victims. SENT: 630 words, photos.

VIRUS OUTBREAK-FAUCI-RACISM — The immunologist who leads the COVID-19 response in the United States said that “the undeniable effects of racism” have led to unacceptable health disparities that especially hurt African Americans, Hispanics and Native Americans during the pandemic. SENT: 330 words, photo.

VIRUS-OUTBREAK-BRITAIN — Travelers in England were packing their bags, bartenders were polishing their glasses and performers were warming up as Britain prepared for a major step out of lockdown — but with clouds of worry on the horizon. Excitement at the reopening of travel and hospitality vied with anxiety that a more contagious virus variant first found in India is spreading fast and could delay further plans to reopen. SENT: 680 words, photos.

OLY-BRITAIN-VACCINES — The British government is still deciding whether to accept an offer from Pfizer to fast-track Olympic and Paralympic athletes for coronavirus vaccines. SENT: 320 words, photos.

VOTING-BLUE STATES — As Republicans roll back access to the ballot, Democrats in certain states have been quietly moving to expand voting rights. In Connecticut, Maryland, Nevada, Virginia and other states where Democrats control the legislature, lawmakers are making it easier to cast ballots by mail, expanding early voting and requiring greater oversight of changes to election laws. SENT: 890 words, photos.

DAUNTE-WRIGHT-POLICING — Elected officials in a Minneapolis suburb where a police officer fatally shot Daunte Wright during a traffic stop in April approved a resolution that puts the city on track to major changes to its policing practices. SENT: 530 words, photos.

ROBERT-DURST-MURDER-TRIAL — It took nearly 15 years for police to arrest New York real estate heir Robert Durst in the killing of his best friend and another five to bring him to trial. After just two days of testimony, jurors were sent home when the coronavirus closed courthouses. On Monday, more than 14 months later, the jury is returning to Los Angeles County Superior Court to see if they can complete their assignment. If so, it could be a first for the U.S. legal system. SENT: 990 words, photos.

GUN-RIGHTS-SANCTUARIES — The first court test of whether local governments can ban police from enforcing certain gun laws is playing out in a rural Oregon county, one of a wave of U.S. counties declaring itself a Second Amendment sanctuary. SENT: 910 words, photos.

HOUSTON-TIGER-SIGHTING — A tiger that frightened residents after it was last seen briefly wandering around a Houston neighborhood has been found after a nearly week-long search and appears to be unharmed, police announce. SENT: 720 words, photos.

STUMP-CITY — Cedar Rapids, Iowa, has long been known for its lush, leafy neighborhoods. But it took only 45 minutes last summer for a rare storm called a derecho to plow through the city with 140 mph winds and leave behind a jumble of branches, downed powerlines and twisted signs. Now, city officials, businesses and nonprofit groups have teamed up with ambitious plans to transform what is now a city of stumps back into the tree-covered Midwestern oasis along the Cedar River. SENT: 860 words, photos.

RAILROAD-SAFETY — Even as railroads are operating longer and longer freight trains that sometimes stretch for miles, the companies have drastically reduced staffing levels, prompting unions to warn that moves meant to increase profits could endanger safety and even result in disasters. SENT: 900 words, photo.

AFGHANISTAN-CEASE-FIRE ENDS — A three-day cease-fire marked by violent attacks — most claimed by the Islamic State group — ended in Afghanistan amid calls for renewed peace talks between the government and Taliban. SENT: 560 words, photos.

GPS-FOR-SHARKS — Sharks use the Earth’s magnetic field as a sort of natural GPS to navigate journeys that take them great distances across the world’s oceans, scientists have found. SENT: 430 words, photos.

BKN--NBA-PLAY-IN FIELD — The NBA entered the final day of the regular season with zero postseason matchups set -- not even the play-in games. UPCOMING: 600 words, photos by 6 p.m.