Paris Saint-Germain routed Reims 4-0 to take the French title race to the last day, as Lille drew 0-0 at home to Saint-Etienne on Sunday for a one-point lead at the top.

Both teams are away next weekend, with PSG at Brest and Lille facing Angers.

PSG coasted after Reims had defender Yunis Abdelhamid sent off in the 11th minute for a handball, and Neymar converted the penalty with a staggered run-up followed by a typically casual shot which sent the goalkeeper the wrong way. 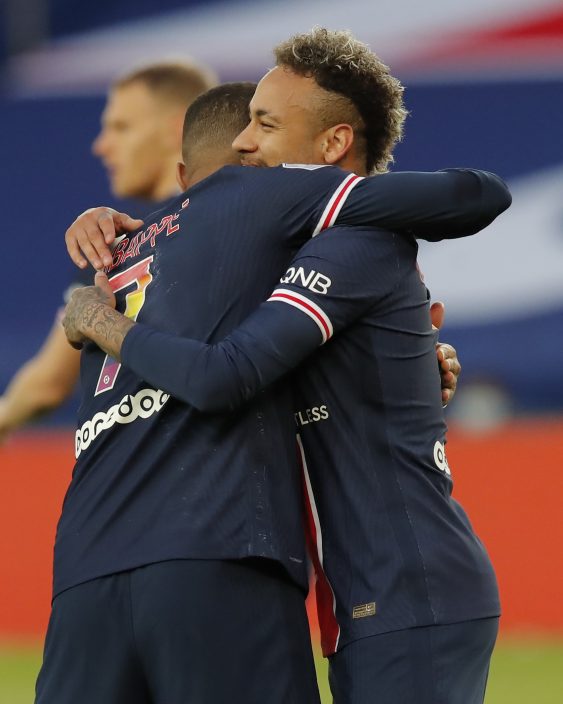 PSG's Neymar, right, celebrates with PSG's Kylian Mbappe after he scores his sides first goal during the French League One soccer match between Paris Saint-Germain and Reims at the Parc des Princes stadium in Paris, France, Sunday, May 16, 2021. (AP PhotoMichel Euler)

Kylian Mbappe doubled the lead midway through the first half after a mistake from defender Thomas Foket, who sent the ball in his own penalty area straight to Mbappe for a league-leading 26th goal and 40th overall this season.

Central defender Marquinhos scored with a trademark downward header midway through the second half and Italy striker Moise Kean completed the scoring in the last minute.

Lille struggled to break down an organized Saint-Etienne side but came close to scoring in the 36th when Luiz Araujo's shot sailed just wide after he latched onto striker Burak Yilmaz's astute pass. 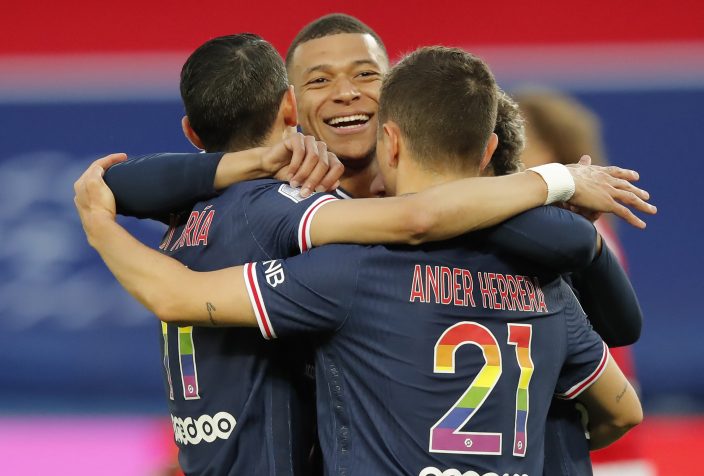 PSG's Neymar, hidden celebrates with PSG's Kylian Mbappe, centre, after he scores his sides first goal during the French League One soccer match between Paris Saint-Germain and Reims at the Parc des Princes stadium in Paris, France, Sunday, May 16, 2021. (AP PhotoMichel Euler)

Lille almost won during injury time but attacking midfielder Yusuf Yazici’s free kick hit the post and Yilmaz’s shot from the rebound was blocked by a defender.

Monaco won to keep its title hopes alive. It is one point ahead of Lyon, which is chasing third place and the Champions League qualifying rounds. 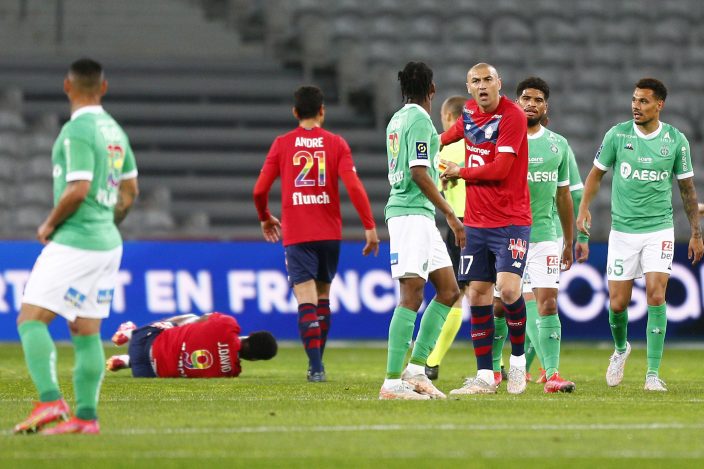 Lille's Burak Yilmaz, third right, gestures to Saint-Etienne's Yvan Neyou, after a foul on Lille's Jonathan David, who lies on the ground, left, during the French League One soccer match between Lille and Saint-Etienne in Lille, France, Sunday, May 16, 2021. (AP PhotoMichel Springler)

Brazil midfielder Lucas Paqueta grabbed two goals and star forward Memphis Depay one as Lyon coasted to a 5-2 win at 19th-place Nimes, which was relegated by the defeat. 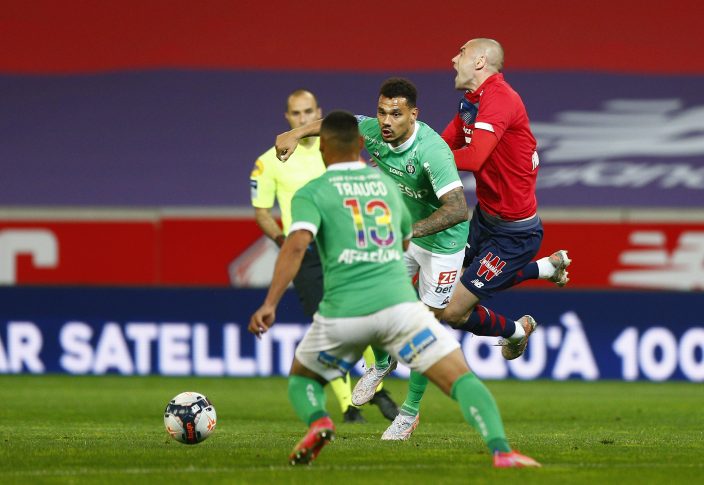 Marseille moved into pole position for fifth and a Europa League berth by beating Angers 3-2, but only after the visitors rallied from 2-0 down to 2-2.

Poland striker Arkadiusz Milik then netted an injury-time penalty to complete a hat trick and take his tally to nine in 15 games since joining on loan from Napoli. 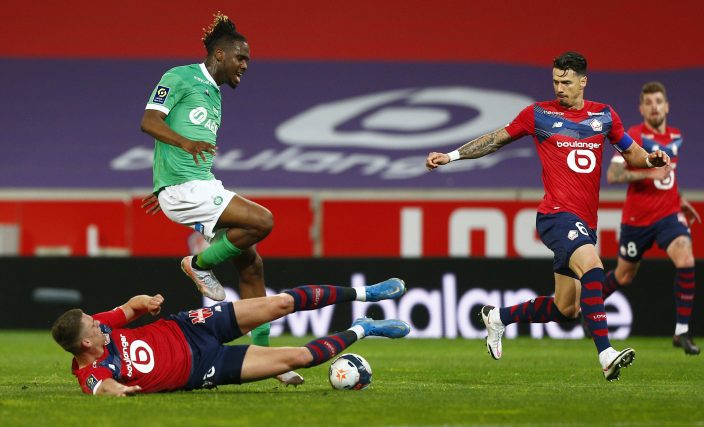 Saint-Etienne's Charles Abi jumps as he is tackled by Lille's Sven Botman, left, during the French League One soccer match between Lille and Saint-Etienne in Lille, France, Sunday, May 16, 2021. (AP PhotoMichel Springler)

Marseille is three points ahead of sixth-place Lens, which lost 3-0 at Bordeaux.

Nantes won 4-0 at last-place Dijon for a fourth straight win but remained 18th and in the relegation-playoff position because Lorient won 2-1 at home to Metz to stay 17th.

Lorient is level on points with 16th-place Brest, which may need a result against PSG next weekend, and 15th-place Strasbourg with the sides only apart on goal difference.

With blood still dripping from his ...