Kevin Durant had 23 points, 13 assists and eight rebounds and the Brooklyn Nets took the No. 2 seed in the Eastern Conference by beating the Cleveland Cavaliers 123-109 on Sunday night.

Kyrie Irving added 17 points and joined an elite list of shooters for the Nets, who will open the playoffs next weekend against either Boston or Washington. They meet Tuesday in the play-in tournament to determine the No. 7 seed.

Durant made his first eight shots, one of them a dunk to finish one of the highlight plays of the season, to bounce back nicely from a 4-for-17 outing Saturday. It was a strong finale to his first season back after missing 2019-20 while recovering from a ruptured Achilles tendon. 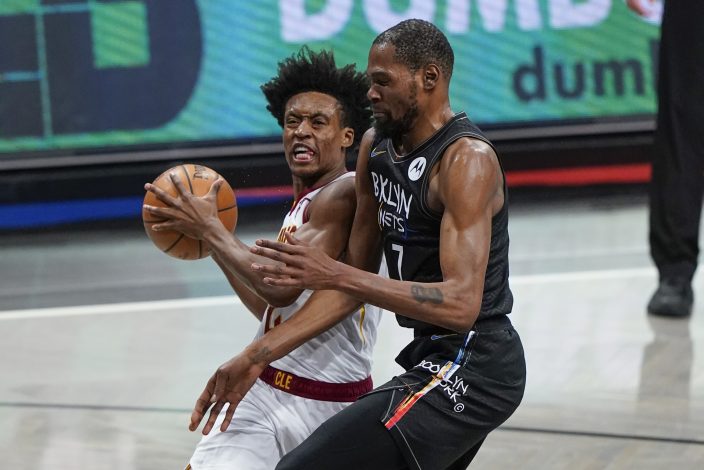 Cleveland Cavaliers' Collin Sexton (2) makes contact with Brooklyn Nets' Kevin Durant (7) during the second half of an NBA basketball game Sunday, May 16, 2021, in New York. Sexton was called for a flagrant foul and ejected from the game. (AP PhotoFrank Franklin II)

The Nets rested James Harden after he played the last two games following an 18-game absence with a right hamstring strain. That meant Brooklyn finished the regular season with just eight appearances from its Big Three, going 6-2.

But the Nets still managed to finish 48-24, holding off Milwaukee for the No. 2 seed and setting a franchise record for the most games over .500 at any point in a season.

Collin Sexton scored 16 points but was ejected midway through the third quarter for a flagrant foul against Durant. Durant was originally called for the foul, but replay showed Sexton elbowed Durant in the face on his drive, so the call was changed to a Flagrant 2, which carries an automatic ejection. 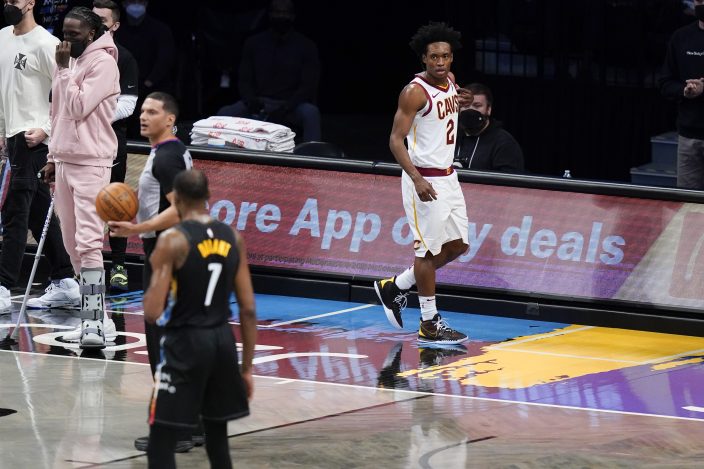 Cleveland Cavaliers' Collin Sexton (2) leaves the court after being ejected for a flagrant foul on Brooklyn Nets' Kevin Durant (7) during the second half of an NBA basketball game Sunday, May 16, 2021, in New York. (AP PhotoFrank Franklin II)

Isaac Okoro and Dean Wade had 18 points for the Cavaliers, who sat Kevin Love and a number of other players in their 13th loss in the last 14 games of a 22-50 season.

The Nets avoided getting swept in the series. The Cavaliers won both meetings in January, including a 147-135 double-overtime victory on Jan. 20 in the first game Durant, Harden and Irving played together. 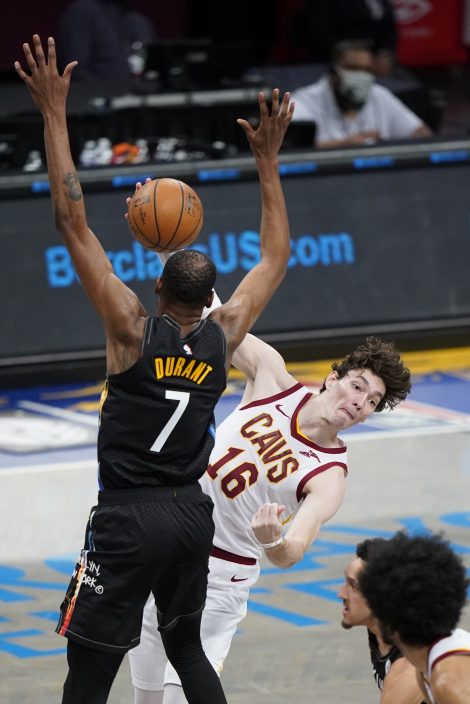 Cleveland Cavaliers' Cedi Osman (16) passes away from Brooklyn Nets' Kevin Durant (7) during the second half of an NBA basketball game Sunday, May 16, 2021, in New York. (AP PhotoFrank Franklin II)

The Nets led 67-56 at halftime, with their final basket coming on the play that had fans and players out of their seats. Blake Griffin grabbed a loose ball out of the air and in one motion threw it behind his back ahead to Irving, who passed it ahead to James. James tossed it high off the backboard for a sprinting Durant to slam down.

Cavaliers: Darius Garland sat out after returning from a seven-game absence with a sprained left ankle to play Friday against Washington. Coach J.B. Bickerstaff said the Cavs wanted the guard to go into the offseason healthy and focus on getting better and not rehab. ... Ending a season in which team outings were largely impossible because of coronavirus protocols, Bickerstaff said the Cavs had an outdoor rooftop dinner in Brooklyn. 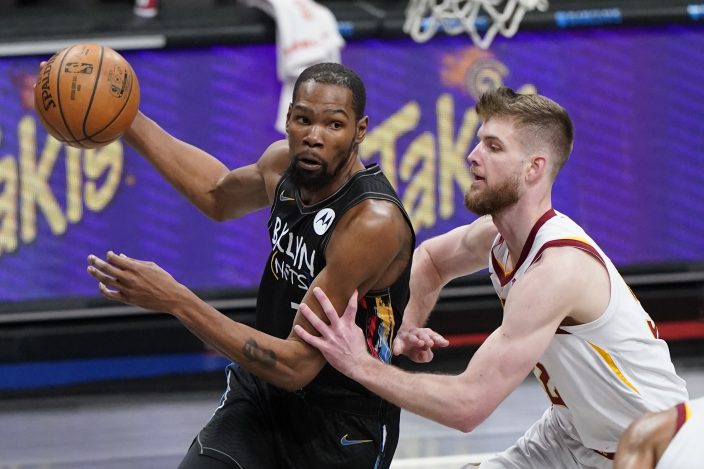 The Nets played a video tribute for Jarrett Allen in his first game in Brooklyn since being dealt to Cleveland in January as part of the multiteam deal for Harden. He got a warm ovation when the starting lineups were announced and some fans chanted his name when he shot free throws in the first quarter.