Rookie Ivan Castillo had a pinch RBI single for his first big league hit to cap a go-ahead, four-run rally in the fourth inning and the San Diego Padres, bolstered by minor leaguers during a COVID-19 outbreak, beat the NL Central-leading St. Louis Cardinals 5-3 on Sunday for a three-game sweep.

It was the first meeting between the teams since the Padres took two of three from the Cardinals to win a wild-card playoff series last season.

The Padres continue to play well despite having five players on the COVID-19-related injured list, including star shortstop Fernando Tatis Jr. The Padres are 5-1 since Tuesday, when Tatis tested positive before a game at Colorado and right fielder Wil Myers and first baseman Eric Hosmer were pulled from the game. A positive test was returned for Myers while Hosmer was put in the contact tracing protocol. Also Tuesday, infielder/outfielder Jurickson Profar and utilityman Jorge Mateo were sidelined because of contact tracing. 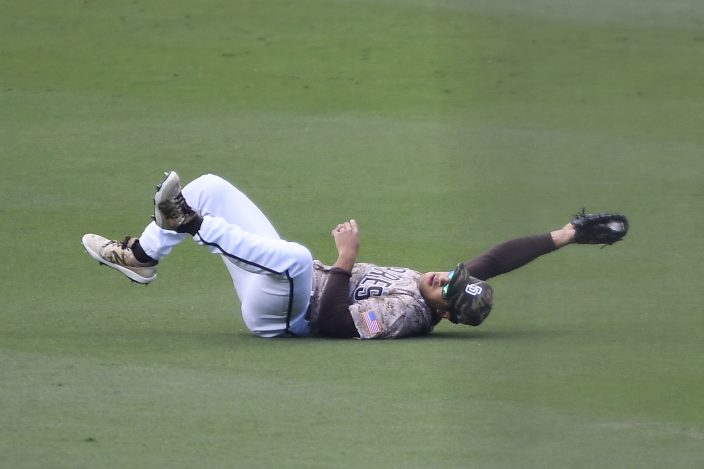 The Padres had to bring up several minor leaguers, and three of them had a hand in the rally in the fourth, when the Padres scored four runs with the benefit of just two hits. Three of the runs were unearned because of a throwing error on eight-time NL Gold Glove Award winner Nolan Arenado on Manny Machado's grounder, leading to a rough inning for left-hander Kwang Hyun Kim.

After Arenado airmailed the throw to first, Machado was forced on Jake Cronenworth's grounder. The next four Padres batters reached and the bases were loaded three times. Kim issued consecutive bases-loaded walks to Tucupita Marcano, who was recalled from Triple-A on Tuesday, and rookie Kim Ha-seong to tie the game at 2.

Genesis Cabrera relieved Kim and Patrick Kivlehan, brought up from Triple-A on Wednesday, gave the Padres the lead with a sacrifice fly. Castillo, pinch-hitting for rookie starter Ryan Weathers, singled to right for a 4-2 lead. 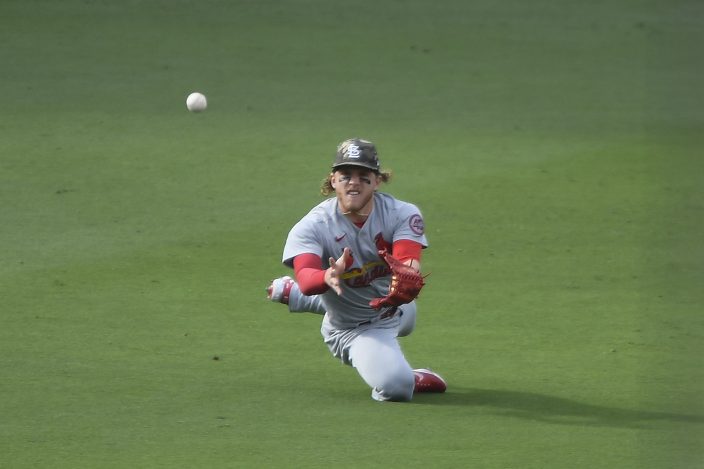 Castillo was promoted from Triple-A on Friday and made his big league debut that night.

Weathers allowed two runs on four hits in four innings, including Arenado's two-run homer in the first, his ninth. Dinelson Lamet (1-0), who finished fourth in the NL Cy Young Award balloting in 2020, piggybacked on Weathers' start and went two innings, allowing one run and two hits while striking out two and walking two. 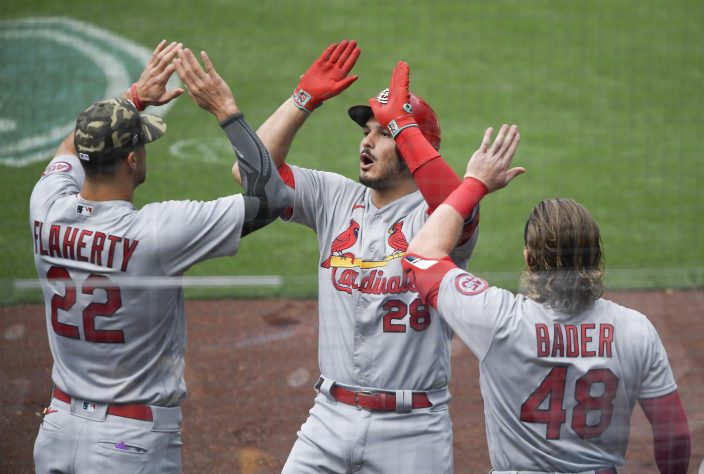 St. Louis Cardinals' Nolan Arenado (28) is congratulated by Jack Flaherty (22) and Harrison Bader (48) after hitting a two-run home run during the first inning of a baseball game against the San Diego Padres Sunday, May 16, 2021, in San Diego. (AP PhotoDenis Poroy)

Mark Melancon pitched the ninth for his big league-leading 14th save in as many chances.

Weathers also got his first big league hit, a single up the middle with two outs in the third.

Lamet is being brought back slowly from an elbow issue that forced him out of his final regular-season start of 2020 and sidelined him during the playoffs. He has made three starts this year, going two innings each time, and had a stint on the IL with right forearm inflammation. 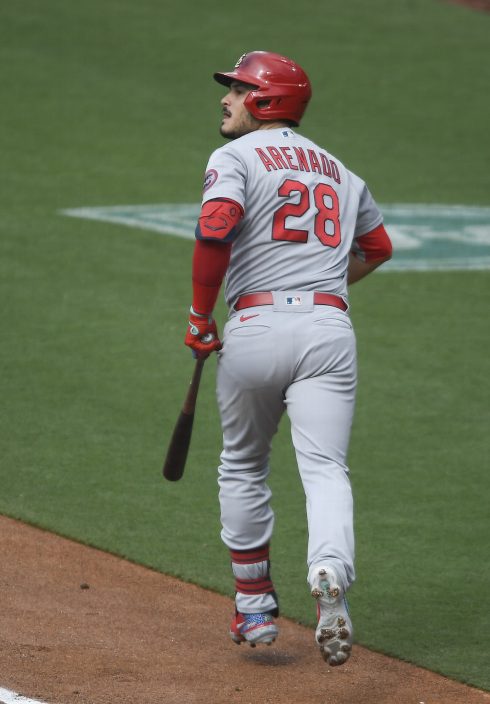 St. Louis Cardinals' Nolan Arenado (28) watches the flight of his two-run home run during the first inning of a baseball game against the San Diego Padres, Sunday, May 16, 2021, in San Diego. (AP PhotoDenis Poroy)

Marcano backed Lamet by starting a slick 4-6-3 double play in the sixth. Paul Goldschmidt scored on the play. Padres Gold Glove center fielder Trent Grisham made a diving catch of Harrison Bader's sinking liner to end the first with runners on second and third. 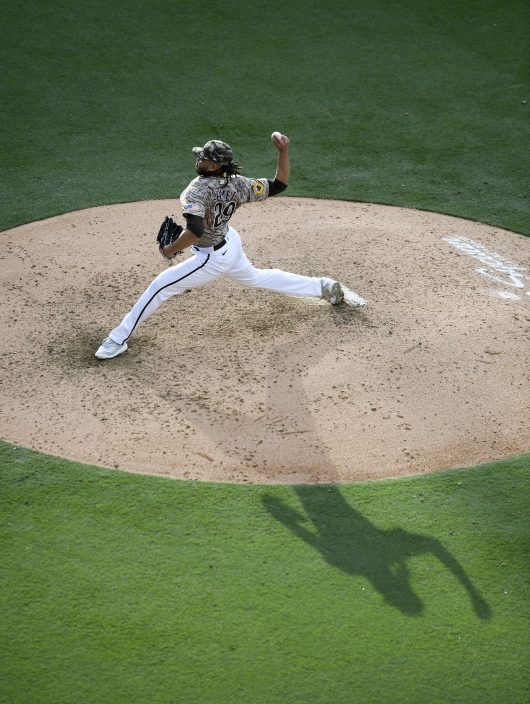 Cardinals: LF Tyler O'Neill, who misjudged Trent Grisham's RBI double in the sixth, later left the game with what the team said was left hand/finger discomfort. ... 2B Max Moroff needed treatment after being knocked down in a collision with RF Dylan Carlson going after a lazy fly ball hit by Austin Nola in the seventh. Carlson made the catch. Moroff stayed in the game.

Padres: Manager Jayce Tingler said RHP Keone Kela will fly to Texas on Monday to get a second opinion on his right elbow. He's been on the injured list since May 8. 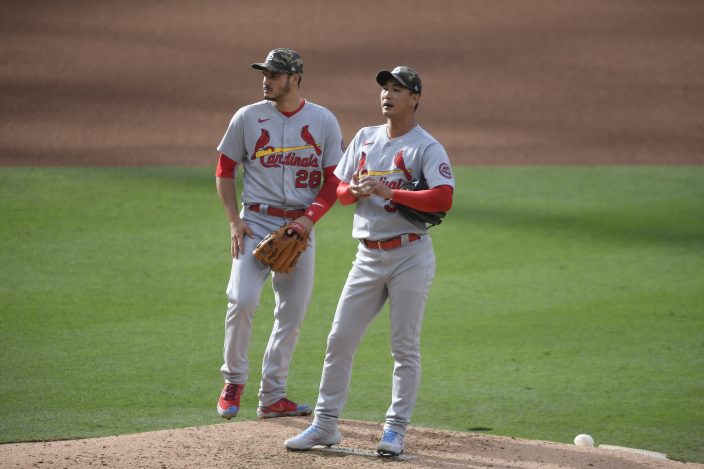 St. Louis Cardinals starting pitcher Kwang Hyun Kim (33) stands on the mound next to third baseman Nolan Arenado (28) before leaving the game in the fourth inning of a baseball game against the San Diego Padres Sunday, May 16, 2021, in San Diego. (AP PhotoDenis Poroy)

Cardinals: RHP John Gant (2-3, 1.83 ERA) is scheduled to start Tuesday night in the opener of a two-game home series against the Pittsburgh Pirates, who will counter with RHP JT Brubaker (3-2, 2.58).

Padres: Haven't named a starter for Monday night's opener of a home series against the Colorado Rockies, who are scheduled to start RHP Jon Gray (4-3, 2.93). 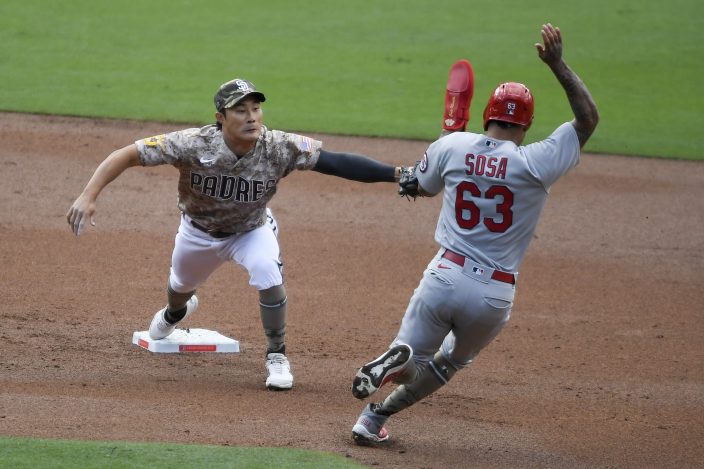