NEW DELHI — For the first time in weeks, India’s daily cases dropped below 300,000, continuing a decline as the country battles a ferocious surge of COVID-19.

The health ministry said around 280,000 cases and 4,106 deaths were confirmed in the last 24 hours. Both numbers are almost certainly undercounts.

India's west coast state of Gujarat is bracing for a severe cyclone that is affecting its coronavirus measures. Cyclone Tauktae has already caused deadly flooding and is expected to make landfall late Monday or early Tuesday. Gujarat has suspended its vaccination drive for two days. 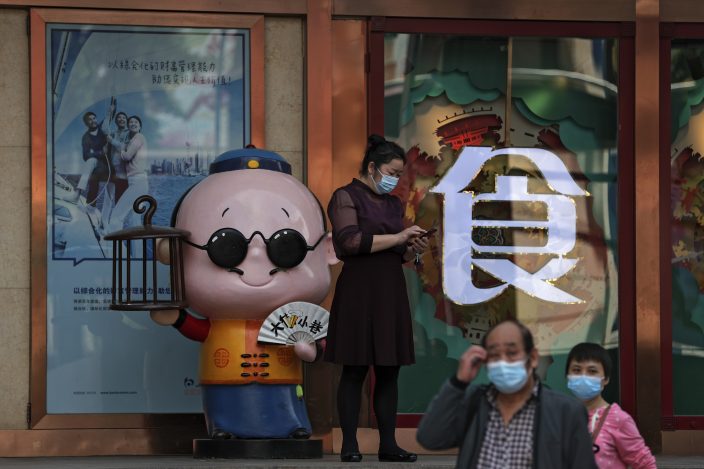 People wearing face masks to help curb the spread of the coronavirus walk by a worker browsing her smartphone outside a restaurant in Beijing, Monday, May 17, 2021. (AP PhotoAndy Wong)

But India’s overall vaccination efforts are also struggling. Ever since the country opened vaccinations to all adults this month, the pace of administering doses has plunged, with many states saying they don’t have enough stock to give out. Over the last month, cases have tripled and deaths have jumped by six times — but vaccinations have dropped by 40%.

The southern state of Karnataka has suspended vaccinations for the 18-44 age group in government-run centers, and a number of states are looking into directly getting shots from overseas to fill a domestic shortage.

On Sunday, health officials said around 5 million doses will be sent to the states this week.

India has the second-highest caseload after the U.S. with more than 24 million confirmed infections and over 270,000 fatalities.

— A dip in cases is bringing a glimmer of hope in India, but shortage of beds, oxygen show virus crisis isn't over yet

BEIJING — China is instituting new controls in a northeastern province where several new cases of COVID-19 are believed to have originated.

China on Monday reported five new cases of local transmission, all in Liaoning province or believed to be linked to its cases.

Checkpoints were set up at toll stations, airports and railway stations in three cities in Liaoning and travelers must have proof of a recent negative virus test, according to state media reports Monday. Mass testing was ordered in part of Yingkou, a port city with shipping connections to more than 40 countries.

China had largely stamped out domestic transmission of the coronavirus through restrictions on the public, contact tracing, mass testing and, increasingly, vaccinations. Health officials suspect the domestic cases may have spread through contacts with an imported case.

ATLANTA — The immunologist who leads the COVID-19 response in the United States said Sunday that “the undeniable effects of racism” have led to unacceptable health disparities that especially hurt African Americans, Hispanics and Native Americans during the pandemic.

COVID-19 has highlighted “our own society’s failings,” Dr. Anthony Fauci said during a graduation ceremony for Emory University.

Speaking by webcast from Washington, Fauci told the graduates in Atlanta that many members of minority groups work in essential jobs where they might be exposed to the coronavirus. He also said they are more likely to become infected if exposed because of medical conditions such as hypertension, chronic lung disease, diabetes or obesity.

“Now, very few of these comorbidities have racial determinants,” Fauci said. “Almost all relate to the social determinants of health dating back to disadvantageous conditions that some people of color find themselves in from birth regarding the availability of an adequate diet, access to health care and the undeniable effects of racism in our society.”

Fauci said correcting societal wrongs will take a commitment of decades, and he urged the graduates to be part of the solution.

The Yemen Football Association says Sami al-Naash died in a hospital in the southern port city of Aden.

Local reports say al-Naash was infected while in a camp for the national team in the southern province of Shabwa last month.

Yemen’s national team was preparing for three games in the coming weeks in hopes to qualify for the Asian Cup and the 2022 World Cup finals in Qatar. Yemen is playing in Group D along with Saudi Arabia, Uzbekistan, Singapore, and the Palestinian territories.

The country, which has been convulsed by civil war since 2014, has been experiencing a surge in coronavirus cases that has overwhelmed Yemen’s depleted medical facilities.