With Barcelona’s season effectively over, Lionel Messi now has a big decision to make.

Should he finish out his career at the club that helped him become an all-time soccer great?

Or have the team's struggles to keep winning trophies convinced him that he can find more success in Paris or Manchester? 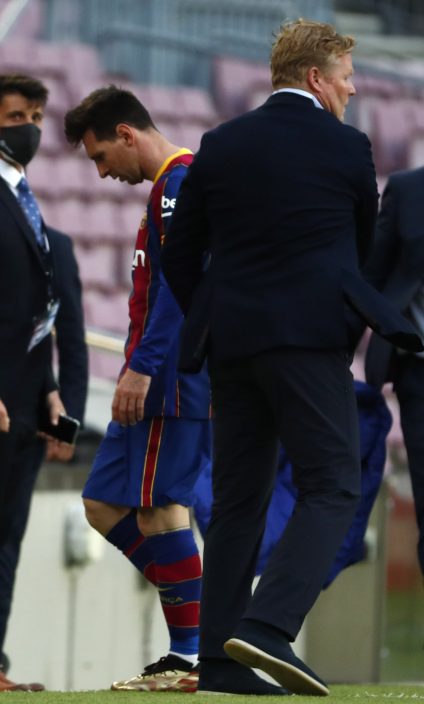 Barcelona was left without any chance of winning the Spanish league on Sunday, bowing out the title race in demoralizing fashion after letting Celta Vigo overhaul a goal by Messi and rally for a 2-1 victory.

Atlético Madrid beat Osasuna 2-1 and can now only be caught by Real Madrid in next weekend’s final round.

Barcelona has one game left on the calendar, but with nothing to play for except third place in the league, the club's attention is now fully on the future of its inscrutable star. 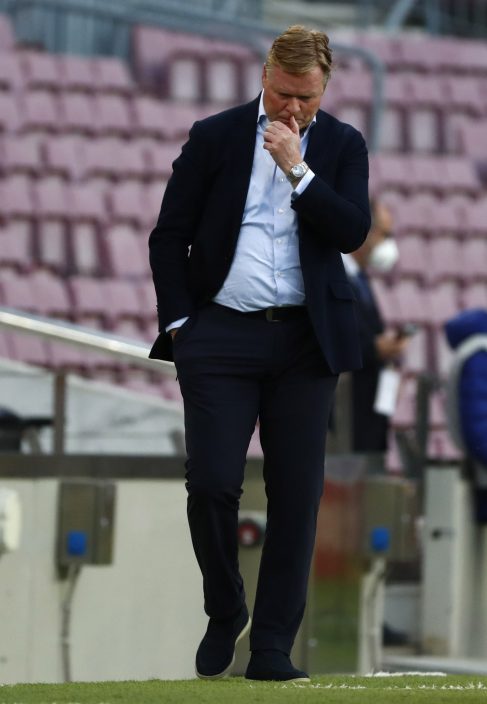 Barcelona's head coach Ronald Koeman reacts as he watches the game during the Spanish La Liga soccer match between FC Barcelona and Celta at the Camp Nou stadium in Barcelona, Spain, Sunday, May. 16, 2021. (AP PhotoJoan Monfort)

Last summer, Messi had said he wanted to leave Barcelona after a campaign that finished without a title and a humiliating 8-2 loss to Bayern Munich in the Champions League. When that exit was denied by the club, Messi said that he would focus on this season and put off any decision until this summer when his contract expires on June 30.

Since then, Joan Laporta has been elected for a second stint as the club’s president. Laporta ran Barcelona when Messi was just blossoming with the team and maintained a good relationship with the player and his family. Even so, Messi has not confirmed a decision on his future.

“I hope not,” coach Ronald Koeman replied when he was asked if he believed Messi had played his final match at Camp Nou — a stadium still without fans because of the COVID-19 pandemic. 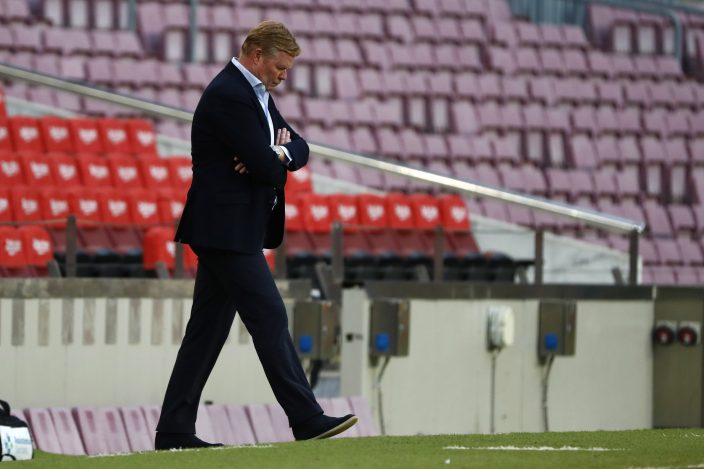 “He is still the best player in the world and today he showed that it is impossible to play without him," Koeman said. "He has scored 30 goals this season (in the league) and earned us a lot of points.

"It is up to Messi. For me and the club, we want him to stay with us. Because if Leo is not here, we have doubts about who can score.”

On the same night that Barcelona's women won the Champions League for the first time by routing Chelsea 4-0, Barcelona's men's lineup was again undone by some sloppy defending and failing to converting their scoring chances.

The 33-year-old Messi extended his club-record tally to 672 goals with a header to give Barcelona a first-half lead against Celta. But like too many times in recent weeks, Barcelona’s defense let it down. Celta striker Santi Mina equalized before halftime on a shot that goalkeeper Marc-Andre ter Stegen could have done more to try to keep out. Mina then added a second goal in the 88th after defender Clément Lenglet left Barcelona a man down when he earned a second yellow card.

Koeman had succeeded in bringing in some younger players to rejuvenate Barcelona’s squad this season and steering the team to the Copa del Rey title last month.

The former Barcelona defender had also inspired his team to a hot streak in the league that had allowed it to almost erase a double-digit lead by Atlético.

But when Barcelona had the opportunity to move past Atlético and take the lead in late April, it was upset 2-1 by Granada at home. That loss derailed the team. Barcelona drew with Atlético and at Levante before the loss to Celta. If it does not beat the already relegated Eibar in the last round, Barcelona could finish in fourth place.

The late-season collapse of his team that may have put Koeman’s job in danger comes with midfield great Xavi Hernández apparently being groomed to take his place.