Chinese equestrian Alex Hua Tian is no stranger to the Olympic Games, but is looking forward to marking a new hoof print at his third Games in Tokyo this summer.

The 31-year-old British-born rider launched his new slogan "Hoof Print to Tokyo" on Friday as he is making his final preparations ahead of the postponed Olympics in Pinford Stables near Manchester. 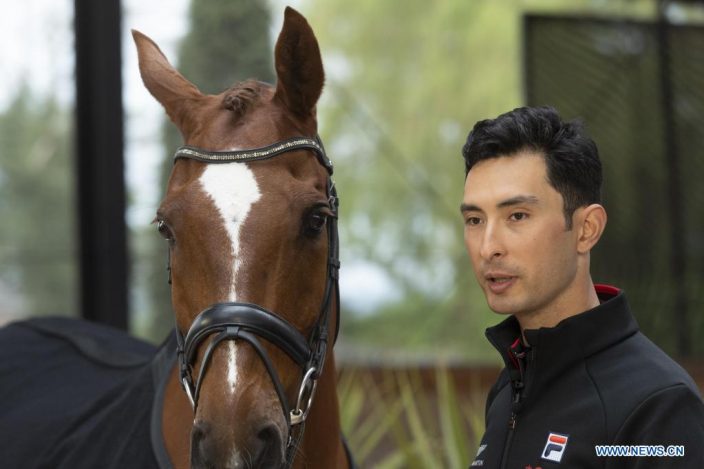 "Under normal circumstances, this event would be held last year in Beijing and Tokyo 2020 would be held in 2020, but nowadays you can't discuss anything without putting it in the broad context of the COVID-19 pandemic," said Hua, accompanied by his father Hua Shan.

"Obviously for myself, for my horses, for my team, Tokyo represents a new Olympic challenge, but also for my Chinese teammates, and also for the equestrian industry and sport in China, it is a new beginning and a new challenge, because that's the first time we qualified for the eventing team event," Hua explained the meanings of the slogan.

"And I think it's a much needed inspiration for global audiences around the world to have the opportunity to use inspirational sport from their lockdown wherever they might be in the world during the pandemic," he added.

So far, Hua has horses Don and Spike both qualified for the Olympics, and he needs to decide which horse will be brought to Tokyo before July 20 when the horses' flight takes off from Belgium.

Hua finished eighth at Rio Olympics with Don, before taking a bronze at the 2018 Asian Games with Spike.

"If the right horse hasn't made itself clear in the lead up to the last few weeks, I could take two horses to the airport, but I can only take one horse on the flight. But in my experiences, under that level of pressure in the final preparation, normally the right horse will make itself clear."

Due to the COVID-19 pandemic, there remains uncertainty over whether the Tokyo Games will take place, but Hua insists that "we are, as a team, 100 percent going until somebody says that we can't."