It took nearly 15 years for police to arrest New York real estate heir Robert Durst in the killing of his best friend and another five to bring him to trial. After just two days of testimony, jurors were sent home when the coronavirus closed courthouses.

On Monday, more than 14 months later, the jury is returning to Los Angeles County Superior Court to see if they can complete their assignment. If so, it could be a first for the U.S. legal system.

The length of the stoppage is unprecedented and it's the highest-profile U.S. case postponed because of the pandemic, Durst’s lawyers say. They have repeatedly — and unsuccessfully — sought a mistrial because they argued the delay harmed his chance of a fair trial. 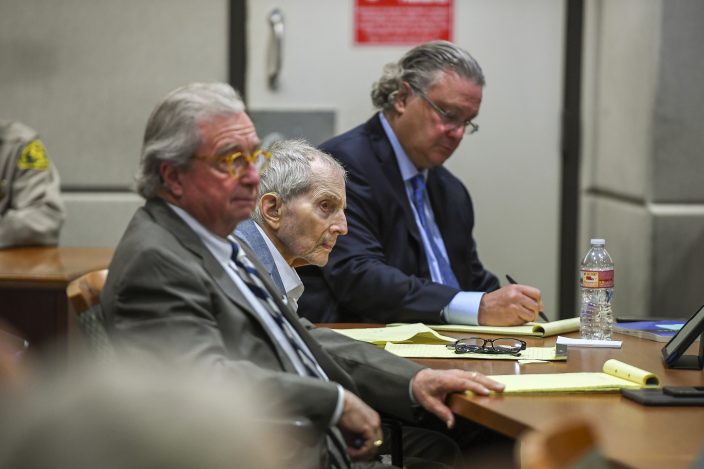 FILE - In this March 5, 2020, file photo real estate heir Robert Durst, middle, sits with his defense attorneys, David Chesnoff, left, and Dick DeGuerin during his murder trial at the Airport Branch Courthouse in Los Angeles. Fourteen months after the murder trial of New York real estate heir Durst was put on hold because of the coronavirus pandemic, jurors are returning to court to see if they can finish the assignment they were given. A Los Angeles judge will question jurors Monday, May 17, 2021, to find out if they can continue to serve in the case that is expected to last four to five months. (Robyn BeckPool Photo via AP, File)

Durst, 78, has pleaded not guilty to murdering his friend Susan Berman, who was shot in the back of the head in her Los Angeles home in December 2000. Prosecutors say he silenced Berman before she could tell police she helped him cover up the killing of his wife, Kathie, in New York in 1982.

Judge Mark Windham has called back the panel of 23 jurors, including 11 alternates, and plans to question them Monday to see if they can go forward with the case.

The defense has submitted a list of proposed questions, including whether jurors read or heard about the case during the break and remain impartial, and if COVID-19 altered their lives in a way that prevents them from serving another four to five months. 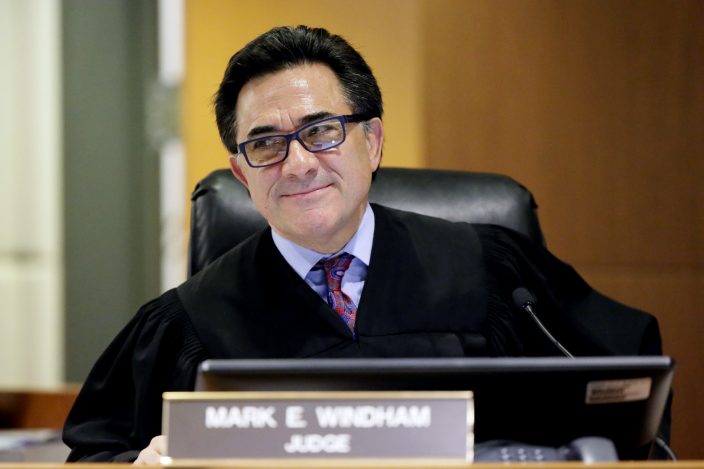 FILE - In this March 10, 2020, file photo Judge Mark E. Windham looks over during the murder trial of real estate heir Robert Durst in Los Angeles. Fourteen months after the murder trial of New York real estate heir Robert Durst was put on hold because of the coronavirus pandemic, jurors are returning to court to see if they can finish the assignment they were given. Windham has called back the panel of 23 jurors, including 11 alternates, and plans to question them Monday, May 17, 2021, to find out if they can continue to serve in the case that is expected to last four to five months. (AP PhotoAlex GallardoPool, File)

The pandemic has disrupted courts nationwide, leading to delays and video rather than in-person proceedings in many instances. Many defendants awaiting trial were freed because of concerns they would get the virus in jail.

What makes the Durst case so unusual is that it was halted after the jury — winnowed from over 400 people — was sworn in and heard four days of opening statements and two days of testimony. 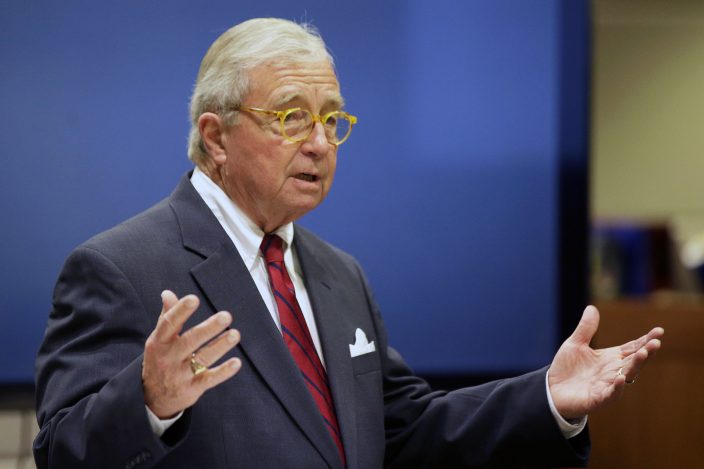 FILE - In this March 10, 2020, file photo, defense attorney Dick DeGuerin completes his opening statement in the murder trial of real estate heir Robert Durst, in Los Angeles. Fourteen months after the murder trial of New York real estate heir Durst was put on hold because of the coronavirus pandemic, jurors are returning to court on Monday, May 17, 2021, to see if they can finish the assignment they were given. Durst's lawyers have repeatedly, and unsuccessfully, sought a mistrial because they argued the delay in March 2020 harmed his chance of a fair trial. (AP PhotoAlex Gallardo, Pool, File)

Scott Sundby, a University of Miami law professor, said he looked into trials that were halted due to damaging earthquakes and hurricanes and hadn't discovered a break as long as the Durst case.

The length of the pause itself was less likely to be a problem because it was not anyone's fault, Sundby said.

But he said Windham, who is likely motivated to keep the jury intact, would have to be vigilant when screening jurors to make sure they hadn't been tainted in any way that could violate Durst's right to a fair trial.

"I think the motivation is most likely that, ‘We spent a lot of time and effort picking a jury and unless I become convinced that this jury cannot be fair, we’re not going to go through that process again,’” Sundby said.

Durst, an eccentric worth more than an estimated $100 million, is being held without bail. He is only charged with Berman's killing but prosecutors are using his wife's disappearance and neighbor's slaying in Texas to build their case against him.

He has long been suspected of killing his wife, whose body has never been found, though he's never been charged and has denied any role in her disappearance.

Berman, a Las Vegas mobster's daughter who met Durst at the University of California, Los Angeles, served as his unofficial spokeswoman when Kathie Durst vanished. She helped him cover his tracks, prosecutors said.

After New York investigators announced they reopened the case in fall 2000, authorities say Berman told Durst she was going to speak with them about what she knew. She was dead two months later.

Nine months after Berman was killed, Durst fatally shot his neighbor Morris Black in a Galveston, Texas, boarding house, where he had gone into hiding as a mute woman.

Prosecutors say he killed Black because the neighbor discovered his real identity.

Durst was acquitted after testifying Black pulled a pistol on him and was shot as they struggled for the weapon. He said he panicked and butchered the man’s body and tossed it into Galveston Bay.

During opening statements in Los Angeles, defense lawyer Dick DeGuerin, who defended Durst in Texas, said Durst didn't kill Berman and doesn't know who did. But he said his client had found her body, panicked and bolted.

Durst sent police a cryptic note alerting them to a “cadaver” in the house only to ensure she would be found, DeGuerin said. Durst had long denied penning the note.

He was arrested in New Orleans in 2015 on the eve of the final episode of “The Jinx: The Life and Deaths of Robert Durst,” an HBO documentary in which he was confronted with the cadaver note and a letter he once sent Berman with similar block print handwriting and the city of Beverly Hills misspelled “Beverley.”

Before being shown the letter he had written to Berman, Durst told the filmmakers that only the killer could have written the cadaver note.

After the “gotcha” moment on camera, he was caught on a hot mic saying to himself in a bathroom, “You’re caught! What the hell did I do? Killed them all, of course.”

If the judge lets the case continue with the current jury, lawyers will be allowed to refresh the panel’s memories by presenting one- to two-hour opening statements.

During the testimony jurors previously heard, several witnesses, including Thomas Durst, another heir to the family's New York commercial real estate empire, said he was terrified of his brother. Others testified that Kathie Durst was afraid of her husband.

Sundby said one of the main concerns for defense lawyers will be whether any of the prosecution’s evidence from the start of trial seared an impression in jurors' minds during the intervening months.

“If the last impression is that his deceased wife was walking around scared of him,” Sundby said, “I would be arguing strongly that that kind of unconscious view of the defendant was allowed to sit and become concrete over the last 14 months.”

Durst jurors to get refresher in deaths tied to millionaire