Georgia’s sweeping new overhaul of election laws threatens the fundamental right to vote, freedom of speech and the separation of powers, according to a federal lawsuit filed Monday.

The lawsuit against the secretary of state and the members of the State Election Board was filed in federal court in Atlanta by county election board members, individual voters, election volunteers, nonprofit organizations and a journalist. It joins a half dozen other legal challenges, asking a judge to declare parts of the new election law unconstitutional and to prohibit the state from enforcing them.

“Liberty requires at least three essential things — an unfettered right to vote, freedom of speech, and the meaningful separation of powers,” the lawsuit says. “This lawsuit is necessary to preserve individual constitutional rights, and constitutional government, against the attacks that (the law) makes on these three pillars of liberty.” 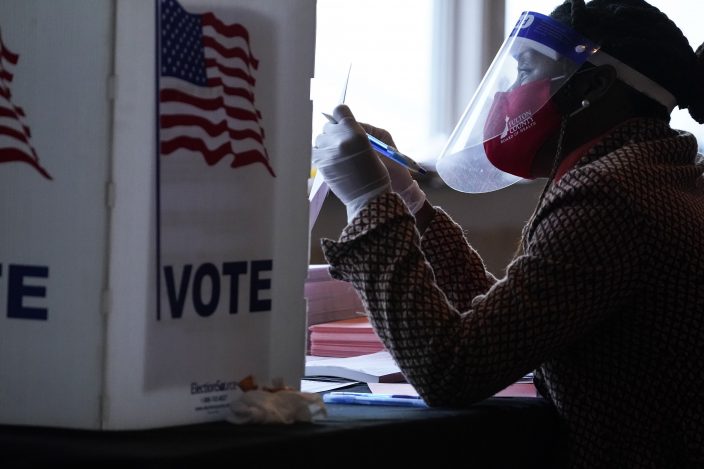 FILE - In this Nov. 3, 2020, file photo, a poll worker talks to a voter before they vote on a paper ballot on Election Day in Atlanta. (Democrats are revising key sections of their sweeping legislation to overhaul U.S. elections, hoping to address the concerns raised by state and local election officials even as they face daunting odds of passing the bill through Congress. AP PhotoBrynn Anderson, File)

The secretary of state's office and the state attorney general's office did not immediately respond to emails Monday seeking comment.

One of the most significant changes in the new law is that it removes the secretary of state as chair of the State Election Board, replacing that elected official with a chair selected by the General Assembly. It also allows the state board to remove county election superintendents — a combined election and registration board in most counties — without providing much notice or giving them a meaningful chance to defend against their removal, and then allows the state board to appoint a single person in their place, the lawsuit says. While election boards are subject to requirements of Georgia's open meetings law, replacing them with a single person would mean that decisions would be made by that one person without the transparency of a public meeting, the lawsuit says.

In counties where the election and registration boards are separate, the election board is the superintendent. While the law provides for a replacement to be appointed for a removed superintendent, it doesn't provide for the appointment of a replacement for the board of registrars, which could leave a county without anyone to do that important work, the lawsuit says.

Another part of the law that has gotten a lot of attention and that has been challenged in other lawsuits because of assertions that it makes it more difficult to vote is a change in the identification verification requirement for absentee ballots. Instead of signing their ballots to be verified by election workers, voters must provide their name, date of birth, address and driver’s license or state ID card number.

Rather than enhancing security as the law’s sponsors and Secretary of State Brad Raffensperger have asserted, this change creates the potential for fraud, vote dilution and identity theft, the lawsuit says. The personal identification information required by the new law can be easily stolen, opening the possibility for ballots to be requested and cast using voters' names and information without their knowledge, the lawsuit says.

The new law makes it a felony to “intentionally observe an elector while casting a ballot in a manner that would allow such person to see for whom or what the elector is voting." But the large touchscreen voting machines that Georgia uses make it hard for anyone in a polling place to avoid seeing a voter's selections, leaving voters and observers open to a felony charge that could discourage their participation, the lawsuit says.

The new law says monitors and observers cannot communicate “any information that they see while monitoring the processing and scanning of absentee ballots” to anyone other than an election official. It also makes it a misdemeanor for those monitors and observers to tally, tabulate, estimate votes. Those provisions mean that observers, including news reporters, would run the risk of criminal charges for reporting on absentee ballot processing, tabulation problems or progress, the lawsuit says.

The law also makes it a misdemeanor to photograph or record the face of a touchscreen voting machine while it is being used to vote or while a voter’s selections are displayed. News media frequently shoot photos and video of people voting and this provision would criminalize constitutionally protected speech, the lawsuit says.

The provisions that allow the State Election Board to replace local election officials are “egregious and dangerous to every concept of free and fair elections,” said Marilyn Marks, executive director of the Coalition for Good Governance, an election integrity advocacy group that is a plaintiff in the lawsuit. And parts of the law that criminalize practices of citizen and press oversight of elections are “abhorrent to modern democratic societies,” she said.