The U.S. placed more members of Myanmar’s ruling military junta on a financial blacklist Monday for the deadly attacks against civilians following the February coup in the southeast Asian nation.

Thirteen of the people are senior members of Myanmar's military, which seized control of the country in February and has killed hundreds of people, including children, to suppress opposition. 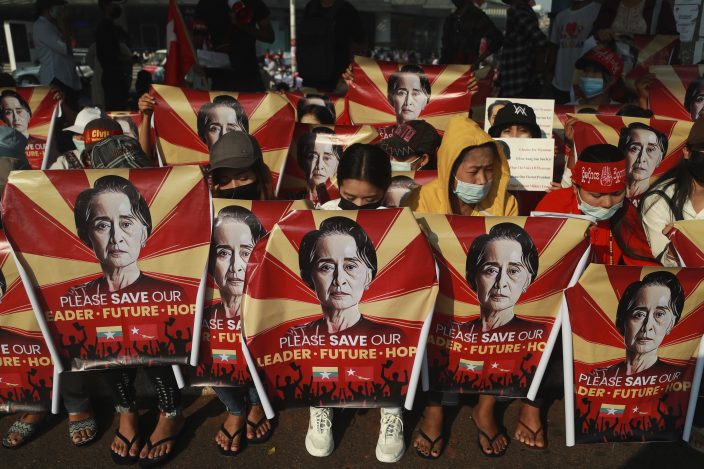 FILE - In this Feb. 20, 2021, file photo, anti-coup protesters hold identical posters with an image of deposed Myanmar leader Aung San Suu Kyi as they gather outside the Hledan Centre in Yangon, Myanmar. One hundred days since their takeover, Myanmar’s ruling generals maintain just the pretense of control over the country. There are fears the military takeover is turning Myanmar into a failed state. (AP Photo, File)

The other three are adult children of three senior military officials who were previously designated for U.S. sanctions.

Treasury said in a statement announcing the new sanctions that the Myanmar military is responsible for deadly attacks on civilians and the State Administration Council was created by the armed forces “to support the unlawful overthrow of the democratically elected civilian government.”

It designated four members of the council as well as senior members of the military junta, including the governor of the central bank, the minister of international cooperation and the commerce minister.

The military on Feb. 1 arrested Aung San Suu Kyi, whose National League for Democracy party won a landslide victory in the Nov. 8 polls and should have secured a second five-year term in office. The U.S. has imposed several rounds of sanctions in response.

The military, which ran the country also known as Burma for more than 50 years until 2015, then prevented elected lawmakers from convening a new session of Parliament and declared a state of emergency and and said it would run the country until new elections were held. Security forces have killed hundreds of people, including bystanders, as it attempts to suppress protests and opposition.