An 18-year-old arrested after a 4-year-old boy was found dead on a neighborhood street in southwest Dallas was known to walk in the area, residents said.

The child, who police have not yet named, was found slain at about 6:50 a.m. Saturday. Police have said they believe the child lived in the neighborhood.

Darriynn Brown was arrested and was being held in Dallas County jail on Monday on charges of kidnapping and burglary. Police say they anticipate additional charges pending the results of a forensic analysis. 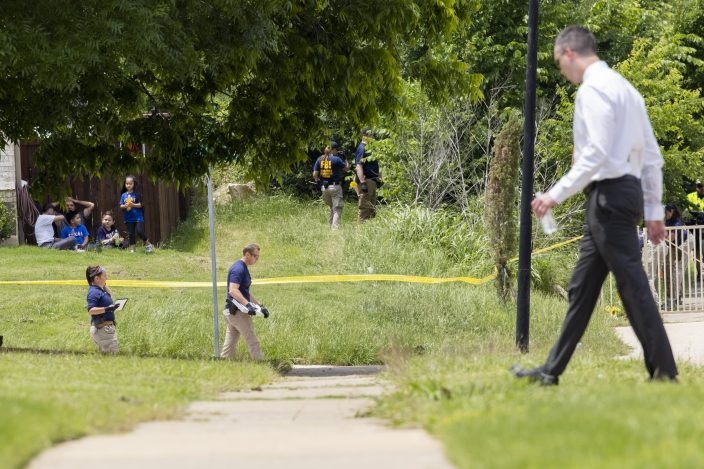 Dallas Police and members of the FBI investigate the scene close to where a toddler was found dead with multiple wounds on Saturday, May 15, 2021, in the Mountain Creek area of Dallas. (Juan FigueroaThe Dallas Morning News via AP)

“Hard to believe. I don’t think he was in his right mind,” neighbor Jose Ramirez told WFAA television station.

Brown's bond is set at $1.5 million. An attorney listed for him did not immediately reply to a message from The Associated Press.

Brown was arrested on April 27 on a misdemeanor charge of evading arrest in a case that’s still pending. According to court documents for that charge, he is unemployed and lives with his parents a half-mile from where the boy’s body was found.

Assistant Police Chief Albert Martinez has said it appeared the child suffered a violent death and that “an edged weapon” was used.

Antwainese Square, 39, told The Dallas Morning News that she alerted authorities after seeing the boy’s body while she was jogging. She said the boy’s face and upper half of his body were covered in blood and that he didn’t have shoes or a shirt.