The Boston Red Sox will be allowed to fill Fenway Park to capacity as of Memorial Day weekend. They would be one of the first teams in major league baseball to play to a full house.

If still alive in the NHL and NBA playoffs, the Boston Bruins and Celtics would also be able to play to full capacity as of May 29, when Massachusetts lifts all remaining COVID-19 restrictions. 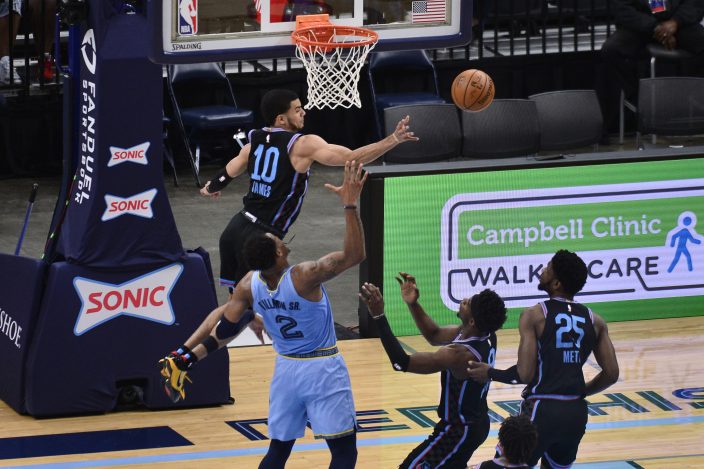 Sacramento Kings guard Justin James (10) knocks the ball away ahead of Memphis Grizzlies center Xavier Tillman (2) in the second half of an NBA basketball game Friday, May 14, 2021, in Memphis, Tenn. (AP PhotoBrandon Dill)

Massachusetts Gov. Charlie Baker said Monday that the state is on track to meeting its goal of vaccinating 4.1 million of the state’s 7 million residents by the first week of June. The state’s face-covering order will also be rescinded on May 29 for most settings, Baker said.

Baker said 75% of adults in Massachusetts have already received at least one dose, with 3.2 million fully vaccinated. New cases in the state have dropped by 89% since January 8. Los Angeles Angels' Shohei Ohtani follows through on a double against the Boston Red Sox during the first inning of a baseball game Friday, May 14, 2021, at Fenway Park in Boston. (AP PhotoWinslow Townson)

The Memphis Grizzlies are expanding capacity to 40%, or approximately 7,000 fans before hosting the San Antonio Spurs in a play-in game Wednesday night.

The Grizzlies announced the expanded capacity Monday after consulting with the Shelby County Health Department and the NBA league office. That’s a bump up from 20% the Grizzlies had in the regular season. Tickets for the play-in game go on sale Tuesday.

Mask and social distancing still will be required inside FedExForum. 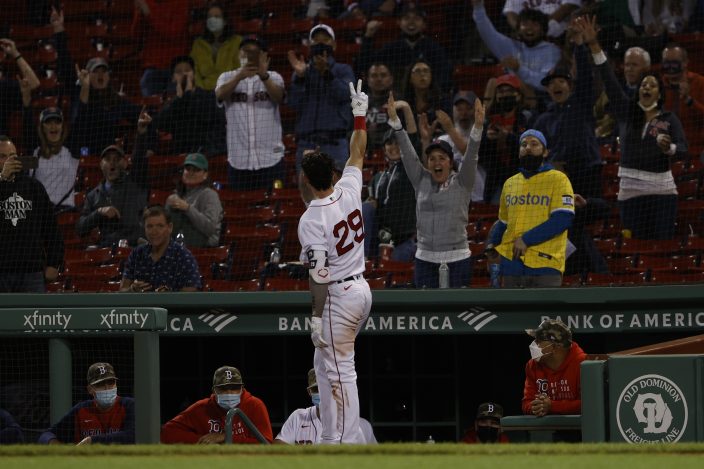 Boston Red Sox's Bobby Dalbec acknowledges the fans after his two-run home run against the Los Angeles Angels during the seventh inning of a baseball game Friday, May 14, 2021, at Fenway Park in Boston. (AP PhotoWinslow Townson)

The New York Road Runners announced Monday that the 50th running of the New York City Marathon will be staged on Nov. 7.

NYRR says a modified field size of 33,000 runners was determined after consulting with state and city officials.

Race director Ted Metellus says the return of the race after a one-year hiatus "will showcase our great city’s strength, inspiration, and determination.”

The race was canceled last year because of the coronavirus pandemic. Runners registered for last year’s marathon were provided the option to receive a full refund of their entry fee or a guaranteed complimentary entry for the 2021, 2022, or 2023 New York City Marathon. This year’s race will accommodate all runners who chose to run in 2021.

Among the more than 30,000 runners who were registered prior to the cancellation last year, NYRR said 54% chose to run this year.

In order to prioritize the 2020 marathon runners who were already guaranteed entry, a drawing will not be held for this year’s marathon. Registration for runners with guaranteed entry will begin June 8 and last for one week.

NYRR’s guidelines for the marathon will include social distancing, elimination of touchpoints, enhanced health and safety protocols, and testing and tracing. Runners should be prepared to provide a negative COVID-19 test result or proof of a complete vaccination series prior to running.

The Latest: Bills to stay in Buffalo again for training camp

The Latest: Knicks tickets to go only to fully vaccinated

The Latest: Denver's Ball Arena gets OK to boost attendance

The Latest: NFL's Panthers to open season at full capacity