The New York Mets' depth is being tested after outfielder Michael Conforto and second baseman Jeff McNeil were placed on the 10-day injured list on Monday with hamstring injuries.

“We’re taking a week-to-week approach with both of these guys,” manager Luis Rojas said. 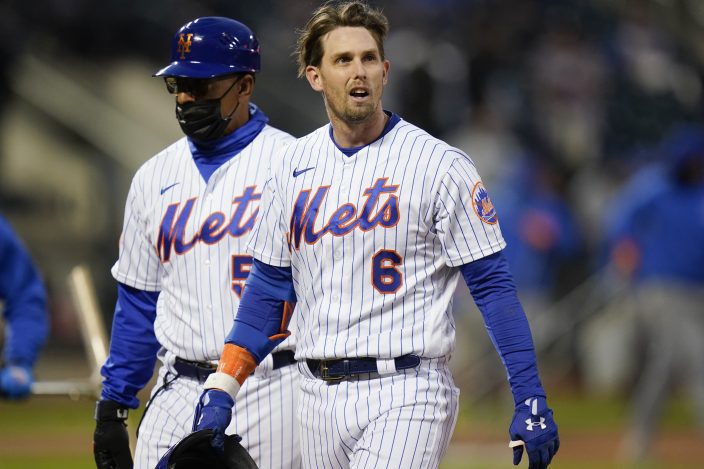 New York Mets' Jeff McNeil (6) leaves the field after being hurt during the third inning of the team's baseball game against the Baltimore Orioles on Tuesday, May 11, 2021, in New York. (AP PhotoFrank Franklin II)

Conforto and McNeil will remain with the Mets while receiving treatment.

Conforto said Monday he had been dealing with other injuries, including a sore calf.

“I felt like I had a good grip on all that stuff and something obviously wasn’t right going down to first base and unfortunately it grabbed on me and that’s where we’re at,” he said.

McNeil missed time last week with cramping in his leg and said Sunday the injuries may be related.

The Mets purchased the contract of Johneshwy Fargas from Triple-A Syracuse and Fargas is starting in center field in Monday night's game at Atlanta. Fargas, 26, will be making his major league debut.

José Peraza is starting at second base.

“We’re very excited our depth has helped us be where we are today,” Rojas said. “We feel pretty strong about our guys coming in tonight to help us against the Braves.”