Jon Lester and David Ross were together again at Wrigley Field on Monday. The old friends ran into each other on a concourse and shared a big hug.

It was a day full of warmth and awkwardness as Lester and Kyle Schwarber returned to Chicago with the Washington Nationals for the opener of a four-game series against their former team. 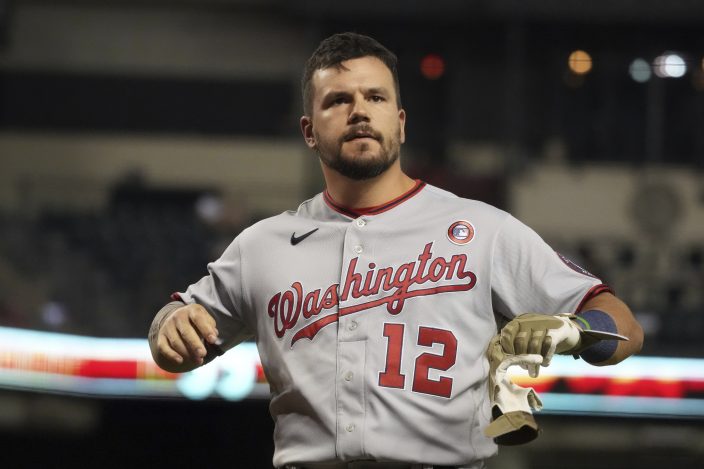 Washington Nationals' Kyle Schwarber reacts after striking out against the Arizona Diamondbacks during the seventh inning of a baseball game Saturday, May 15, 2021, in Phoenix. (AP PhotoRick Scuteri)

Lester's December 2014 deal with the Cubs in free agency was a touch point in the franchise's rise from the bottom of the standings to World Series champion. Schwarber, a first-round pick by Chicago in 2014, also played a big role when the Cubs won it all five years ago for the first time since 1908.

Asked what Lester brought to Chicago that remains with the team today, Ross joked about Lester's fondness for Miller Lite. Then Ross, the current manager of the Cubs and former catcher for the left-hander, turned serious.

“I think he brought a championship mentality and a preparation and hard work that he expected every day, that he held himself accountable for and that he was brought up knowing how to do, he brought that here,” Ross said, “and winning followed.”

Lester went 77-44 with a 3.64 ERA in 171 starts for Chicago, and the team made the playoffs five times in his six years with the franchise. He talked about returning and how much it would mean to earn career win No. 200 with the Cubs, but the sides weren't able to work it out and he finalized a $5 million, one-year deal with the Nationals in January.

The 37-year-old Lester got the ball for the series opener, and a laughing Ross said it was "extremely, extremely awkward” to game-plan for the pitcher.

Schwarber quickly became a fan favorite after he was promoted to the majors in 2015, flashing tape-measure power at the plate. He hurt his left knee early in the 2016 season, but he returned in time to serve as the designated hitter for the World Series games in Cleveland and hit .412 (7 for 17) with two RBIs to help the Cubs win the title.

The 28-year-old Schwarber was non-tendered by Chicago in December, and he signed a $10 million, one-year deal with Washington. While he has moved on with his new team, he remains fond of his first big league club.

“There's a lot of things here that made me the person I am today and the ballplayer I am today,” Schwarber said. “There's things that you definitely keep with you and so it's hard to forget, because this is where you came up, this is where you grew up in the big leagues.”