Cole (5-2) allowed season highs of five runs and seven hits, getting pulled after Garcia led off the sixth with a sharp single on the right-hander’s 89th pitch. Cole struck out seven, but also issued two free passes after walking none over his previous five starts.

Garcia's 11th homer was an opposite-field shot leading off the second, and was the first of three consecutive extra-base hits. David Dahl and Isiah Kiner-Falefa followed with back-to-back doubles that made it 2-1 and put Texas ahead to stay. Garcia stole home, part of a double steal with two outs in the sixth after Cole exited, for a 5-1 lead. 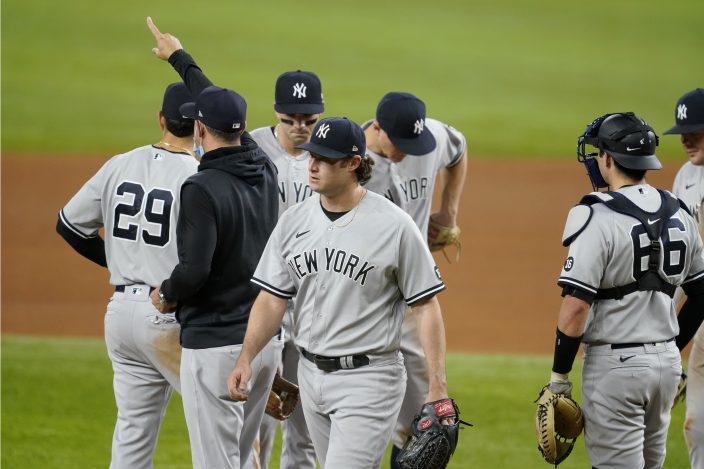 New York Yankees manager Aaron Boone gestures to the bullpen after taking the ball from starting pitcher Gerrit Cole, center, in the sixth inning of a baseball game against the Texas Rangers in Arlington, Texas, Monday, May 17, 2021. (AP PhotoTony Gutierrez)

The Rangers, coming off their first winless road trip of at least six games since 1991, hadn't won since their previous home game, May 9 against Seattle when they reached .500 for the second time this season.

Jordan Lyles (2-3) struck out six in six innings for his first win in eight starts since winning his season debut April 4. Three of the first four Yankees batters had singles, and Gio Urshela's run-scoring hit put them ahead 1-0. But they got only one other runner past first base against the Texas right-hander.

Ian Kennedy worked a perfect ninth for his AL-leading 11th save in 11 chances. Luke Voit's first homer of the season was a solo shot in the Yankees' eighth.

Calhoun, who had a double leading off the first, hit his fifth homer to open the fifth.

Cole's franchise record-matching streak of 12 consecutive starts allowing two earned runs or less ended, keeping him tied with Whitey Ford (1963) and Chad Green (2017-19). Cole also snapped a run of five starts in a row going at least six innings and not walking a batter, one off the team record David Wells set 18 years ago. 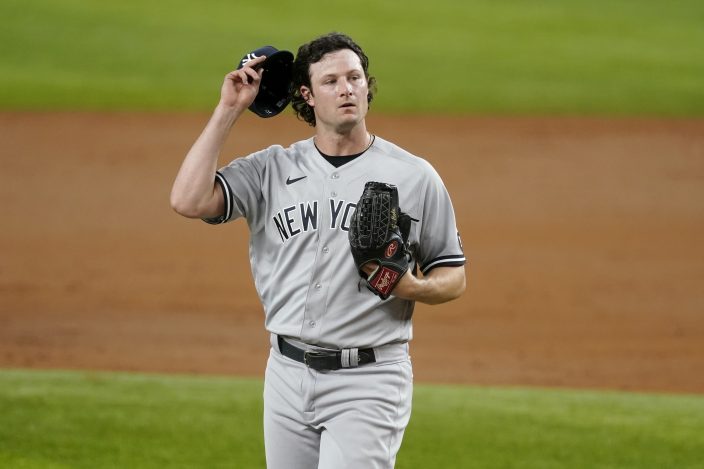 New York Yankees starting pitcher Gerrit Cole adjust his cap as he works against the Texas Rangers in the third inning of a baseball game in Arlington, Texas, Monday, May 17, 2021. (AP PhotoTony Gutierrez)

Cole's span of 41 2/3 innings without a walk since April 12 ended when Joey Gallo reached with one out in the third. The ball got past catcher Kyle Higashioka, and Gallo took off and rounded first base before tripping and then having to scamper back to the bag to avoid an embarrassing out.

Yankees: DH Giancarlo Stanton was placed on the 10-day injured list because of a left quad strain. The move was retroactive to Friday. ... Manager Aaron Boone said LHP Zack Britton, rehabbing from elbow surgery March 15 to remove a bone chip, had some soreness after his one-inning simulated game Saturday with Triple-A Scranton/Wilkes-Barre, and that his planned rehab start for Double-A Somerset on Wednesday might get pushed back a couple of days. ... Former Rangers 2B Rougned Odor, who has missed 12 games with a left knee sprain, could return as early as Tuesday. 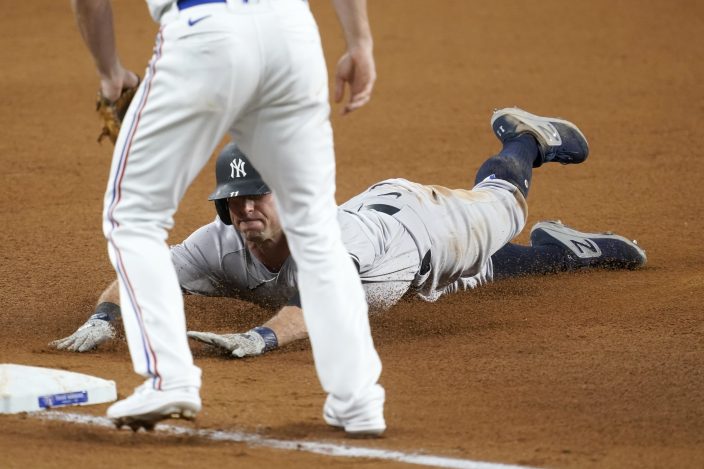 Texas Rangers shortstop Charlie Culberson, front, stands by the bag as New York Yankees' Brett Gardner slides safely into it with a triple in the fourth inning of a baseball game in Arlington, Texas, Monday, May 17, 2021. (AP PhotoTony Gutierrez)

Rangers: The Rangers announced they have passed the 85% COVID-19 vaccination threshold for Tier 1 players and staff. That means some of MLB’s coronavirus protocols will be relaxed for the team, including some restrictions on road trips. ... 3B Brock Holt, out since May 3 with a right hamstring strain, is scheduled to begin a two-game rehab stint Tuesday with Double-A Frisco. General manager Chris Young said Holt could be activated after that if all goes well.

A pair of right-handers with 1-3 records, Jameson Taillon for the Yankees and Mike Foltynewicz for the Rangers, start Tuesday in the second of four games in the series. 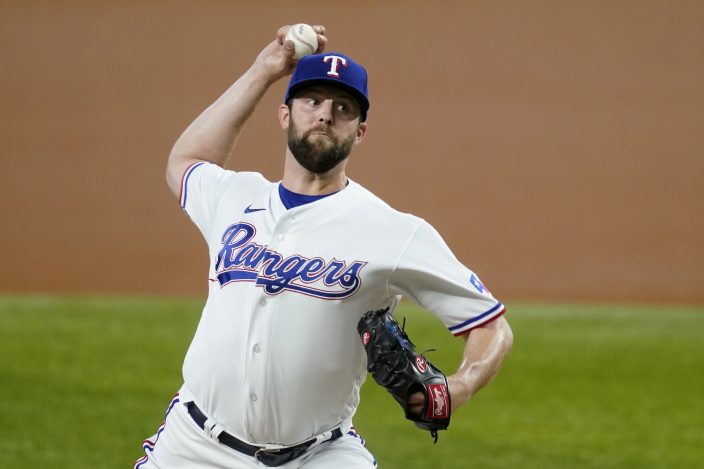 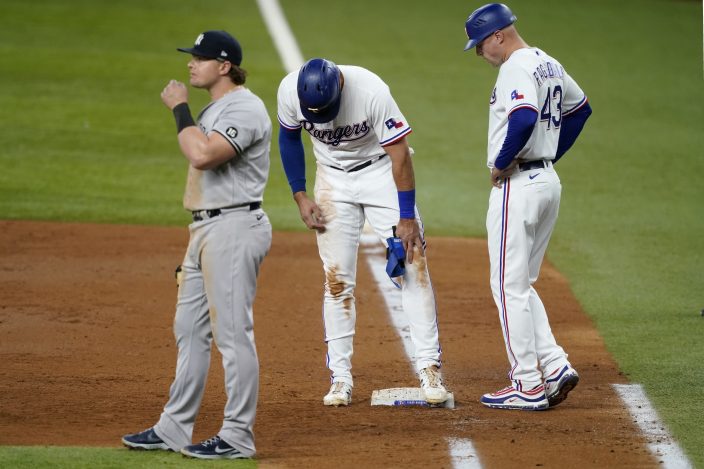 New York Yankees first baseman Luke Voit, left, stands by as Texas Rangers first base coach Corey Ragsdale (43) checks on Joey Gallo, center, in the third inning of a baseball game in Arlington, Texas, Monday, May 17, 2021. Gallo, who earned a walk in the at-bat, stumbled on the bag looking back at the plate landing awkwardly on the ground. Gallo continued playing in the game. (AP PhotoTony Gutierrez) 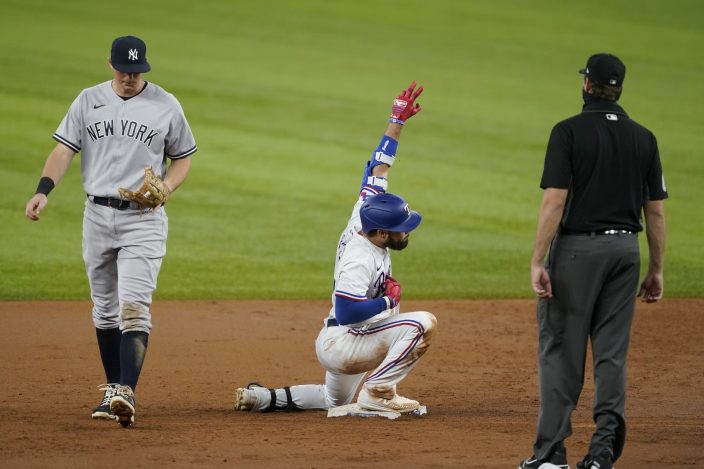 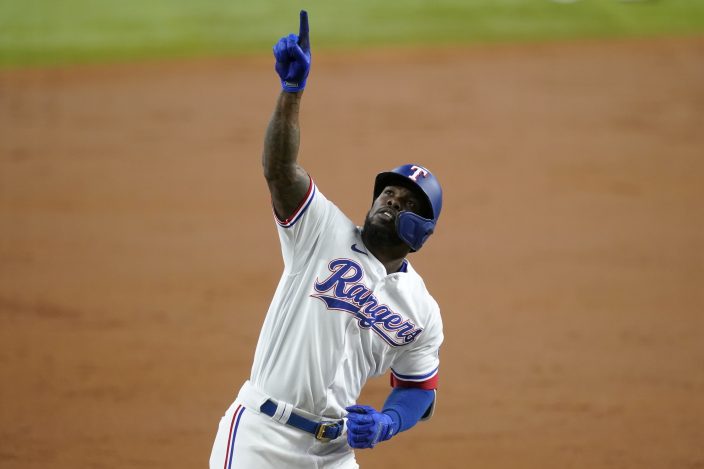 Texas Rangers' Adolis Garcia celebrates as he rounds third after hitting a solo home run on a pitch from New York Yankees starting pitcher Gerrit Cole in the second inning of a baseball game in Arlington, Texas, Monday, May 17, 2021. (AP PhotoTony Gutierrez) 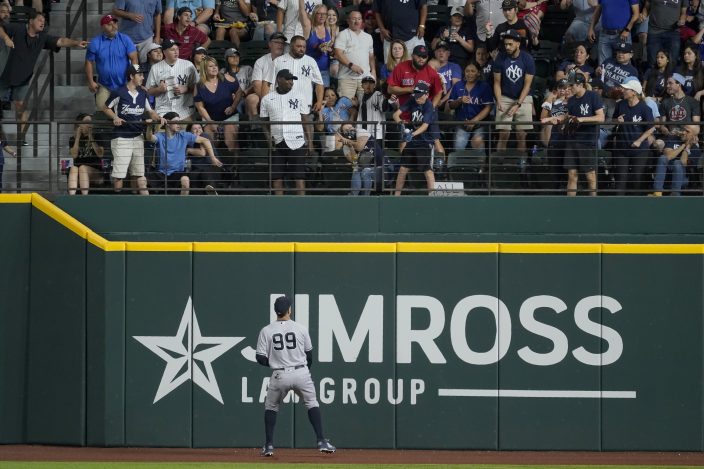 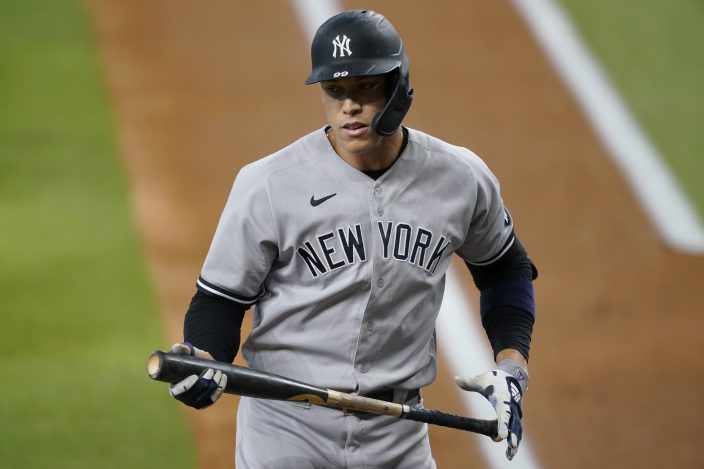 New York Yankees' Aaron Judge turns to the dugout after striking out in the first inning of a baseball game against the Texas Rangers in Arlington, Texas, Monday, May 17, 2021. (AP PhotoTony Gutierrez)