Seven players had multiple hits for Chicago, which posted season highs in hits (18) and runs. The White Sox have won nine of their past 11 games, including four straight wins against Minnesota. 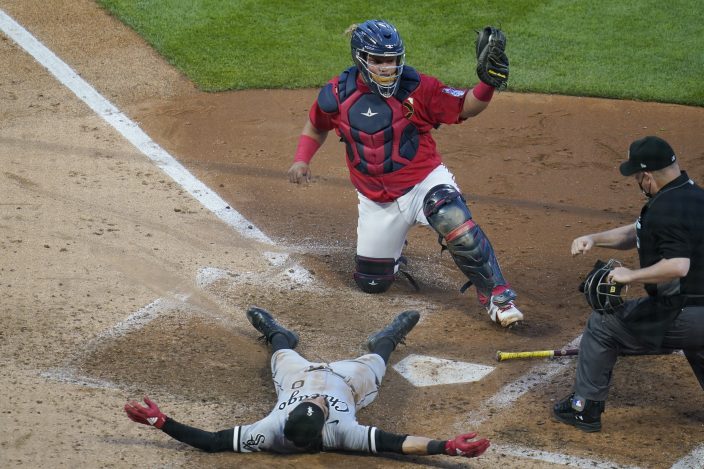 Chicago White Sox's Billy Hamilton, bottom, is tagged out by Minnesota Twins catcher Willians Astudillo, top, while trying to score from third on a triple in the fifth inning of a baseball game, Monday, May 17, 2021, in Minneapolis. (AP PhotoJim Mone)

J.A. Happ (2-2) was roughed up again by the White Sox. Happ permitted six runs in 3 2/3 innings and has given up 15 runs to Chicago in his past two starts.

Happ had allowed just six runs in his first five starts for the Twins after signing as a free agent in the offseason. His ERA has risen from 1.91 to 5.35 in the past two starts.

Josh Donaldson hit a two-run homer and Rob Refsnyder had four hits for Minnesota, which has lost seven of eight. 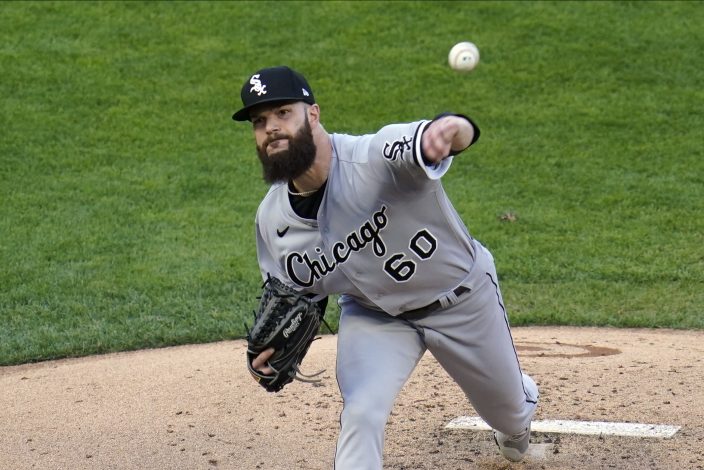 Chicago White Sox pitcher Dallas Keuchel throws against the Minnesota Twins in the first inning of a baseball game, Monday, May 17, 2021, in Minneapolis. (AP PhotoJim Mone)

White Sox: 1B José Abreu will miss the entire series with left ankle inflammation. Abreu was injured sliding into home plate Sunday. X-rays were negative and an MRI showed inflammation. Chicago manager Tony La Russa said Abreu will possibly return for Friday night’s game in New York after an off day on Thursday.

Twins: C Mitch Garver left in the fourth inning with a bruised right knee. Garver took a pitch off the knee earlier in the game. The team said he’s considered day to day. He was replaced by Willians Astudillo, who was available after he was hit by a pitch on the left hand Sunday. … RHP Kenta Maeda will throw Tuesday to determine whether he will be able to make his next scheduled start as he deals with groin tightness. … OF Max Kepler was out of the lineup as he deals with a hamstring injury, and manager Rocco Baldelli said Kepler could need “a little time.” … Twins rookie Alex Kirilloff, on the injured list with a right wrist sprain, took batting practice and could begin a rehab assignment with Triple-A St. Paul this week. 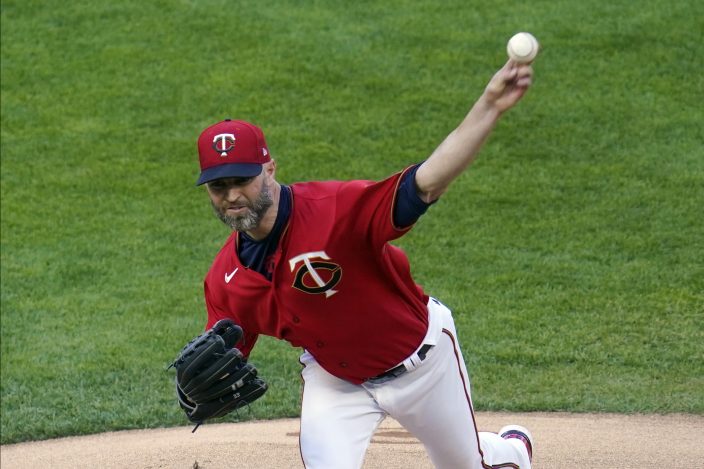 Minnesota Twins' pitcher J.A. Happ throws against the Chicago White Sox in the first inning of a baseball game, Monday, May 17, 2021, in Minneapolis. (AP PhotoJim Mone)

Chicago RHP Lance Lynn (4-1, 1.30 ERA) will make his first start in Minnesota since he was traded from the Twins to the New York Yankees in 2018. Lynn earned a win against Minnesota in his last start on May 13 when he gave up just an unearned run in five innings. RHP Michael Pineda (2-2, 2.79) will start for the Twins. Pineda allowed three runs in 5 1/3 innings opposite Lynn that day. 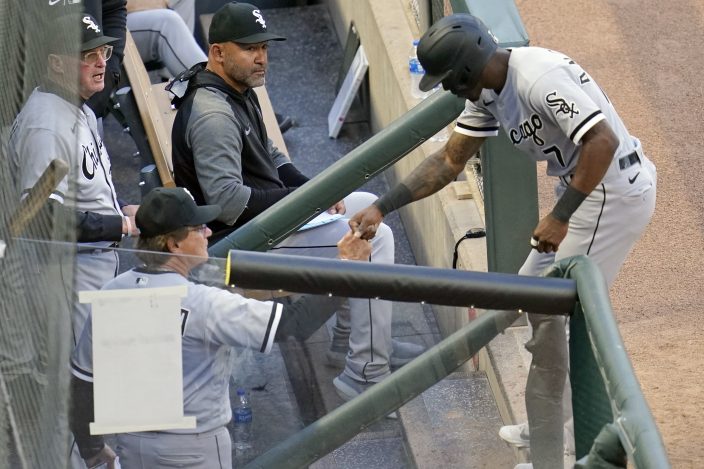 Chicago White Sox's Tim Anderson, right, is congratulated in the dugout by manager Tony La Russa after he scored on a double by Nick Madrigal off Minnesota Twins' pitcher J.A. Happ in the fourth inning of a baseball game, Monday, May 17, 2021, in Minneapolis. (AP PhotoJim Mone) 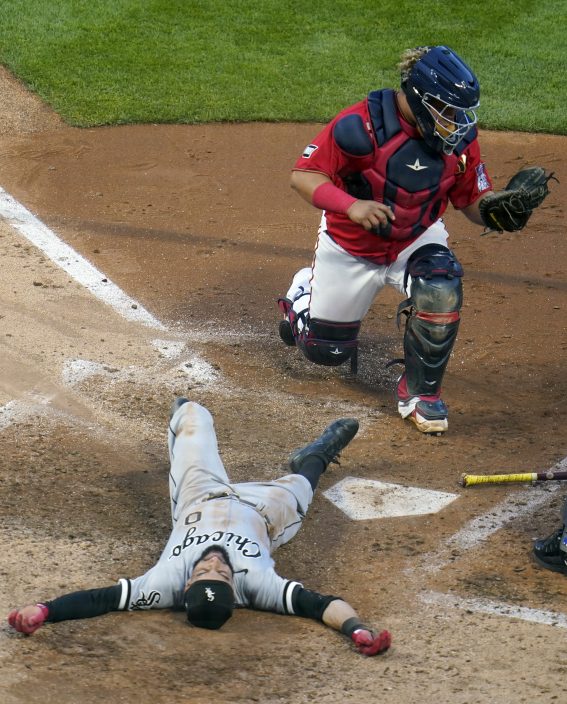 Chicago White Sox's Billy Hamilton, bottom, is tagged out by Minnesota Twins catcher Willians Astudillo while trying to stretch a triple in the fifth inning of a baseball game, Monday, May 17, 2021, in Minneapolis. (AP PhotoJim Mone) 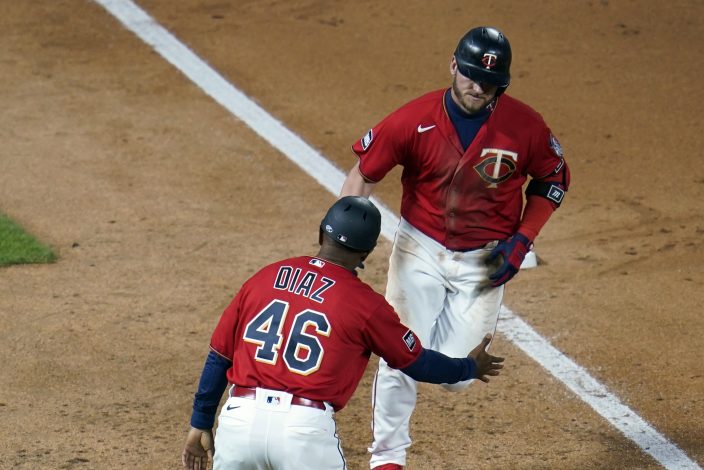 Minnesota Twins' Josh Donaldson, right, is congratulated by third base coach Tony Diaz on his two-run home run off Chicago White Sox pitcher Dallas Keuchel in the sixth inning of a baseball game, Monday, May 17, 2021, in Minneapolis. (AP PhotoJim Mone)