The final of Japan’s Top League club competition on Sunday will mark the end of one of world rugby’s most distinguished and influential recent playing careers.

Japan winger Kenki Fukuoka will retire after the final between his Panasonic Wild Knights and Suntory Sungoliath, ending his playing career at its zenith to pursue a career as a doctor.

Fukuoka retired from international 15-a-side rugby after the 2019 World Cup in Japan and hoped to end his career by representing his country in sevens at the Tokyo Olympics. But the postponement of the Tokyo Games last year made that impossible. 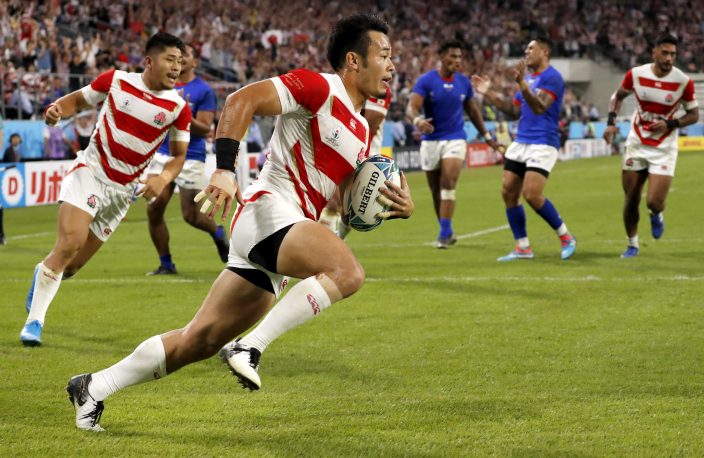 FILE - In this Oct. 5, 2019, file photo, Japan's Kenki Fukuoka runs in to score a try during the Rugby World Cup Pool A game at City of Toyota Stadium between Japan and Samoa in Tokyo City, Japan. Fukuoka will retire after playing for the Panasonic Wild Knights against Suntory Sungoliath in the final of Japan's Top League club competition on Sunday May 23. (AP PhotoShuji Kajiyama, File)

In March, he announced he'd passed the entrance exam for the Juntendo University School of Medicine in Tokyo. He began his studies in April, forcing his withdrawal from the Japan rugby sevens program.

Instead, Fukuoka decided to play to the end of the Top League season before calling time on his playing career aged only 28. As if to demonstrate what Japan and world rugby is losing, Fukuoka scored three tries in the Wild Knights’ 48-21 semifinal win over Toyota Verblitz last weekend.

Fukuoka is a superstar of Japanese rugby, one of the main catalysts for its recent growth in profile and popularity. The Top League now attracts some of the world’s best players, not any longer at the end of their careers, and Fukuoka bears favorable comparison with any of those global stars. 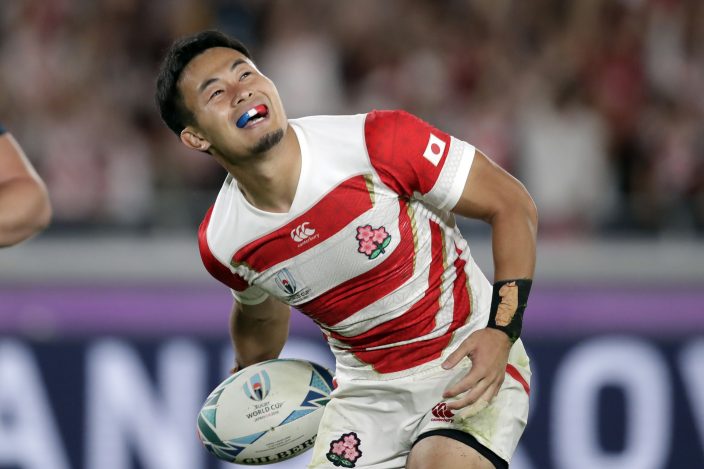 FILE - In this Oct. 13, 2019, file photo, Japan's Kenki Fukuoka scores a try during the Rugby World Cup Pool A game at International Stadium against Scotland in Yokohama, Japan. Fukuoka will retire after playing for the Panasonic Wild Knights against Suntory Sungoliath in the final of Japan's Top League club competition on Sunday May 23. (AP PhotoJae Hong, File)

He is by nature quiet, thoughtful and self-effacing. But his influence on Japanese rugby hardly can be overstated. He scored four tries in Japan’s historic drive to the World Cup quarterfinals in 2019, including two against Scotland and another against world heavyweight Ireland.

Fukuoka would have been a star in any national team with his blazing pace and balanced running. He owns a greater place in the hearts of rugby fans for his humility and perpetual smile.

Making the decision to end his rugby career at a relatively young age and to give up his goal of playing at a home Olympics would have been a difficult one for any player. Fukuoka took the decision with quiet resignation.

“Life is a journey,” Fukuoka told The Associated Press. “I have had setbacks and changes from the dreams and goals I first set myself.

“Still, I think I am the person I am today from making choices that I do not regret with continuous effort to give it all out into the things in front of me. I have no regrets about my own choices. I am very proud of it.”

Medicine is a natural choice for Fukuoka. His father is a dentist and his grandfather is a doctor.

“I haven’t decided on any area yet but ... my strength is my experiences of playing sports at world level. I want to take a path where I can use my experiences and I want to give back to sports.”

Fukuoka regards the World Cup in Japan as the highlight of his career and the match against Scotland in which Japan qualified for the quarterfinals as the individual high point.

“We had built up to that moment for a long time so there was a lot of pressure,” Fukuoka said. “The whole world was watching."

He said coming around the time of a deadly typhoon, Hagbis, “added to the importance around the match.”

“It was a chance to give the country a big lift,” he said. "We were grateful to play through the support from many people who were involved. Many things came together to make this a special match for Japanese rugby.”

Fukuoka emphasizes the vital contribution to the Japan national team of players such as Michael Leitch, who captained the Brave Blossoms to the 2015 and 2019 World Cups.

He sees the team continuing to improve because many of its current players are only at the mid-point of their careers and likely will go on to the next World Cup.

“Belief is hugely important and being able to win games regularly helps with that,” he said. “It makes you expect more of yourself each time you play, both individually and as a team.

“I was injured before the Rugby World Cup in 2019 and was not in 100 percent condition. But I could give everything I had, just like the rest of the team.”

“The players are raising their levels and the depth is growing because the bar is being raised and we know we can compete against the top countries now,” he said. “The strong Top League has helped with that.

Being on the same field with All Blacks flyhalf Beauden Barrett, or Springboks fullback Willie Le Roux or All Blacks lock Brodie Retallick “is not so unusual for us anymore,” Fukuoka said, "and that is good for Japan.”