Hong Kong leader Carrie Lam on Tuesday defended the freezing of pro-democracy publisher Jimmy Lai's assets as a necessary move under the city's new national security law to protect the safety of all Chinese people.

Lam told reporters the move was authorized under the sweeping law that was imposed on the city by Beijing last year and empowered authorities to “freeze suspicious assets involved that would undermine national security." 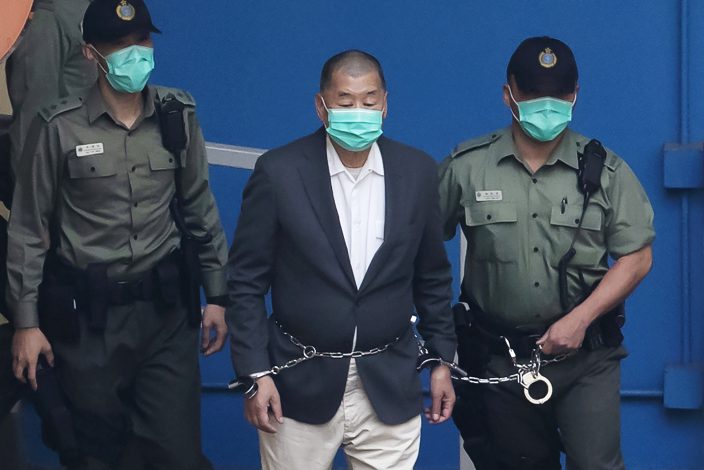 FILE - In this Dec. 12, 2020, file photo, Jimmy Lai, center, who founded the Apple Daily tabloid, is escorted by Correctional Services officers to get on a prison van before appearing in a court, in Hong Kong. Hong Kong’s leader Carrie Lam on Tuesday defended a move to freeze the assets of pro-democracy publisher Jimmy Lai, a move seen as furthering the crackdown on opposition voices in the semi-autonomous Chinese region. (AP PhotoKin Cheung, File)

Critics say the national security law is meant to snuff out dissent in the semi-autonomous Chinese territory, while defenders say it intends to ensure those running the city are Chinese patriots committed to public order and economic development.

Lam has been the face of the crackdown on dissent, although she is believed to be acting entirely on orders from Beijing, whose Communist Party leaders have long regarded Hong Kong as a potential incubator of opposition that could spread through the country.

The freezing of Lai’s assets led the Hong Kong stock exchange to halt trading of shares in Next Digital on Monday. The company founded by Lai, who owns a 71% stake and is its controlling shareholder, publishes pro-democracy newspaper Apple Daily, which has seen advertisers abandon it as the government ratchets up pressure on dissenting voices in the city at the urging of leaders in Beijing.

Lai has been a high-profile voice in the the territory’s pro-democracy movement and is serving a 14-month sentence for his role in two unauthorized assemblies in 2019 when Hong Kong residents were involved in mass anti-government protests. Lai was among 10 people who pleaded guilty Monday to taking part in another unlawful assembly in 2019.

Last week, Apple Daily's Taiwan version said it would move online because “pro-China forces” had blocked access to advertising for its flagship Apple Daily and other publications in Hong Kong.

Lai has long been a unique figure in Hong Kong's media landscape, overwhelmingly dominated by corporations whose outlets took a largely neutral view on politics while relentlessly chasing news about celebrities, the ultra-rich and their scandals.

While his outlets also chased salacious topics, they were often critical of Beijing and its representatives in Hong Kong.

That drew the ire of the city's pro-China establishment, which has not only avoided discussing politically sensitive topics concerning the mainland and Hong Kong, but has become increasingly critical of what Beijing terms foreign interference in the city's affairs, whether through outreach to opposition figures by the U.S. Consulate or Britain's offer of a passage to citizenship for holders of the British National (Overseas) passport that many Hong Kongers possess.

Hong Kong's media outlets are now almost completely dominated by pro-Beijing business groups and even independent booksellers have become rare. The national security law has also given authorities broad powers to monitor speech online, making it difficult to organize opposition gatherings or even express views critical of the government or Beijing.

Activists: Vatican is 'meddling' in Italy ...

The Vatican has formally opposed a ...

7 Hong Kong democracy leaders to be sentenced amid crackdown