Sirens wailed just before the Jewish holiday of Shavuot began on Sunday evening, sending Chen Farag and her family once again running for cover as they have dozens of times over the past week since the latest war between Palestinian militants in Gaza and the Israeli military erupted.

The Farags live in Ashdod, Israel’s largest port on the Mediterranean coast. The city of about 225,000 people is around 30 kilometers (18 miles) north of the Gaza Strip. Six adults, two dogs and a parrot huddled in their home’s reinforced safe room — a routine precaution for hundreds of thousands of Israelis in the country's south.

After an explosion shook the building, they rushed outside to see cars on fire, including their own. Their home's front door had been blown off, windows were blasted and shrapnel was embedded in walls. 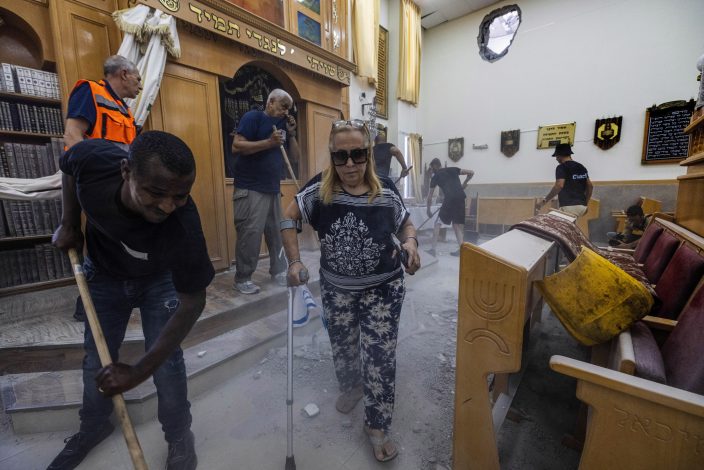 People clean debris from a damaged synagogue after it was hit by a rocket fired from the Gaza Strip, in Ashkelon, Israel, Sunday, May 16, 2021. (AP PhotoTsafrir Abayov)

“We are in shock. It’s a nightmare," said Farag, a 24-year-old cable technician. “It's hard to sleep, because we are thinking, what if Gaza tries to hit us again?”

The cycle of fighting and cease-fires has repeated itself numerous times in the past 15 years since the first rockets were fired at southern Israel from the Gaza Strip. The barrages have caused deep frustration for residents, many weary over what they see as the government’s failure to change to the situation. Many children who have grown up in the area suffer from trauma-related issues.

Since the latest war erupted last week, Palestinian militants have fired more than 3,200 rockets at Israeli cities. Most were intercepted or fell short, in Gaza, but hundreds made it through. 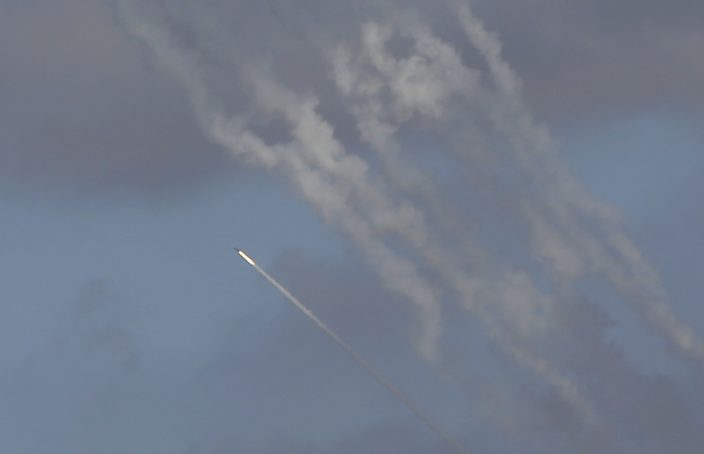 Rockets are launched from the Gaza Strip to Israel, Monday, May 17, 2021. (AP PhotoHatem Moussa)

The Farag home is one of 146 buildings in Israel that were hit by rockets fired from Gaza, according to military statistics. They include homes, apartment blocks, schools, kindergartens and an oil storage tank.

When sirens signal incoming rockets, Israelis can seek shelter in communal shelters or in reinforced rooms in their apartments, a feature of newer buildings. Many have been pinned down indoors, fearing they couldn't reach shelter in time.

So far, 10 people have been killed in Israel, most from rocket fire. This includes a soldier, a 5-year-old boy and two people who died from injuries sustained while running for cover. Paramedics say at least 106 people suffered shrapnel and blast wounds. 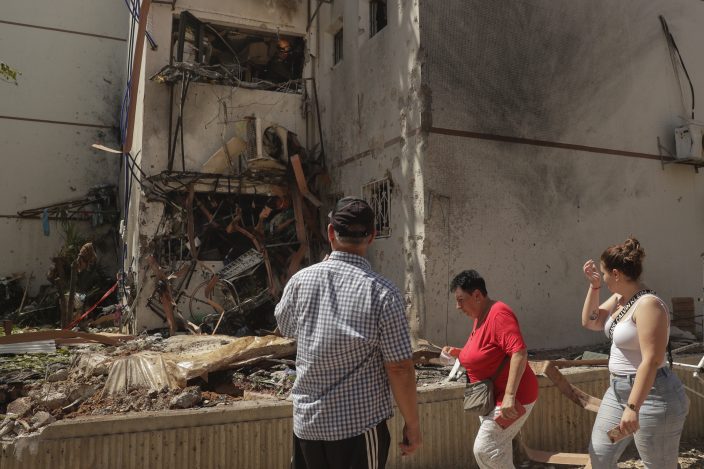 People look at a residential building after it was hit by a rocket fired from the Gaza Strip, in Ashdod, Israel, Monday, May 17, 2021. (AP PhotoMaya Alleruzzo)

In Gaza, at least 212 Palestinians have been killed in Israeli airstrikes, including 61 children and 36 women, with more than 1,400 people wounded, according to the Gaza Health Ministry.

Fighting erupted on May 10, when Hamas fired seven rockets at Jerusalem following clashes between Israeli police and Palestinian protesters at a shrine considered holy to both Jews and Muslims. Since then, Palestinian militants have fired heavy barrages at cities deep inside Israel, and the Israeli military has carried out hundreds of strikes on targets in the Gaza Strip.

For hundreds of thousands in communities in southern Israel — cities, towns, kibbutzim and farming villages — air raid sirens have been unrelenting as missiles rain down. 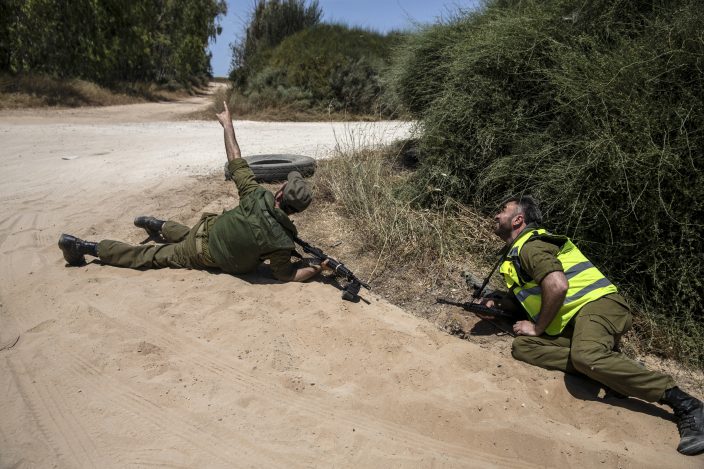 Israeli soldiers take cover on the ground as a siren sounds a warning of incoming rockets fired from the Gaza Strip, near the Israeli-Gaza border, in southern Israel, Monday, May 17, 2021. (AP PhotoHeidi Levine)

“There were two difficult days. The rockets didn’t stop falling," said Ronit Ifergan, 47, a mother of three from Kfar Aza, a kibbutz just a couple of miles from the Gaza Strip.

Almost everyone left the kibbutz to seek safety elsewhere; Ifergan and her family are staying with relatives in the nearby town of Ofakim. Her children are too scared to use the bathroom, terrified they would get caught in a barrage, she said.

“I don’t know where to flee to. I am afraid of every place I need to go,” she said. 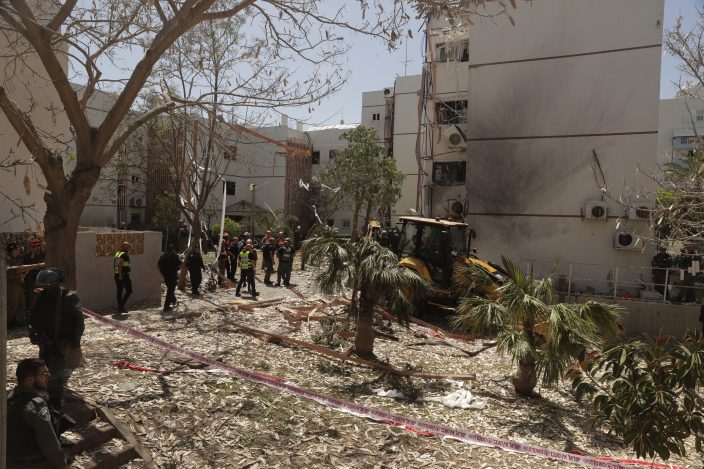 Israeli security forces inspect a residential building after it was hit by a rocket fired from the Gaza Strip, in Ashdod, Israel, Monday, May 17, 2021. (AP PhotoMaya Alleruzzo)

Ifergan and other residents of the area say the past week of fighting has been far more intense than previous rounds, with Hamas firing near-nonstop barrages of rockets indiscriminately into Israel.

This is the fourth Israel-Hamas war since the militants seized the Gaza Strip in 2007, driving out the Palestinian Authority, which administers autonomous enclaves in the occupied West Bank.

Israel and Egypt have enforced a border blockade of Gaza for the past 14 years, with the aim of preventing Hamas from building up its weapons arsenal. But despite the chokehold, the militants have been able to produce thousands of rockets, even as the blockade caused growing hardships for the tiny territory's 2 million people. 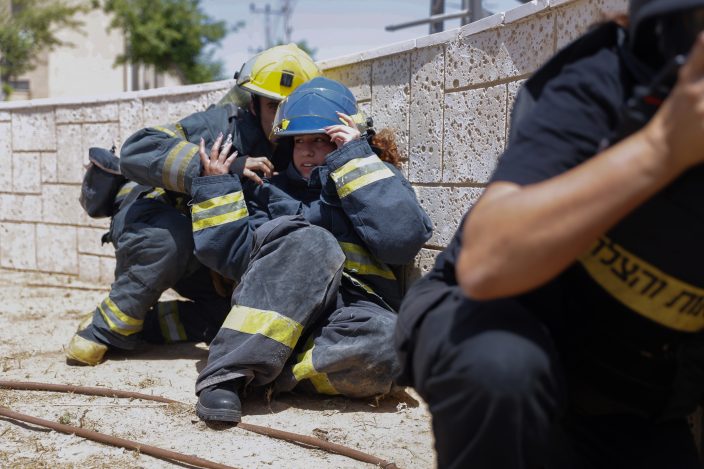 Israeli firefighters take cover as a siren sounds a warning of incoming rockets fired from the Gaza strip, in the southern Israeli town of Ashkelon, Tuesday, May 11, 2021. (AP PhotoAriel Schalit)

On the Israeli side, Yoash Hagay, 53, said his hometown of Ashkelon — just 11 kilometers (6 miles) from Gaza — has been hit hard, with a couple of rockets making it through Israel's Iron Dome defense system with every barrage.

“Every time you hear a couple interceptions by the Iron Dome, and two or three explosions on the ground," he said.

Israeli Prime Minister Benjamin Netanyahu has vowed to press on with airstrikes against Gaza militants "as long as necessary in order to return calm and security to all Israeli citizens.” 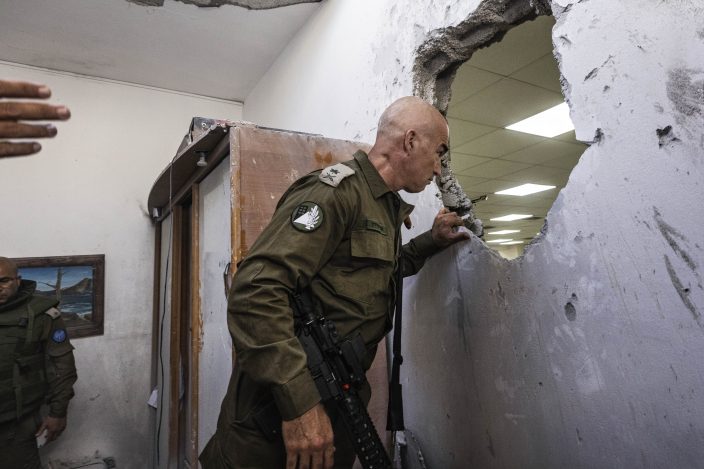 An Israeli army officer inspects a damaged synagogue after it was hit by a rocket fired from the Gaza Strip, in Ashkelon, Israel, Sunday, May 16, 2021. (AP PhotoTsafrir Abayov)

Ifergan says southern Israel has seen “many years of neglect” by the government, exacerbated by what she describes as unfinished military campaigns against Gaza militants. She criticized the government's handling of the past month of mounting tensions in Jerusalem, violence that heralded the Gaza fighting.

“We are tired of this,” said Farag, whose house was damaged in Ashdod. “We always hope that it will end. And it will be just be quiet.”

“It never happens,” she added. 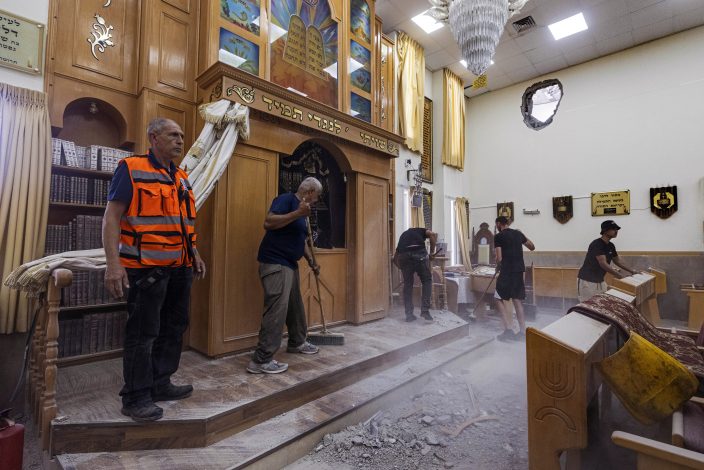 People clean a damaged synagogue after it was by a rocket fired from the Gaza Strip, In Ashkelon, Israel, Sunday, May 16, 2021. (AP PhotoTsafrir Abayov) 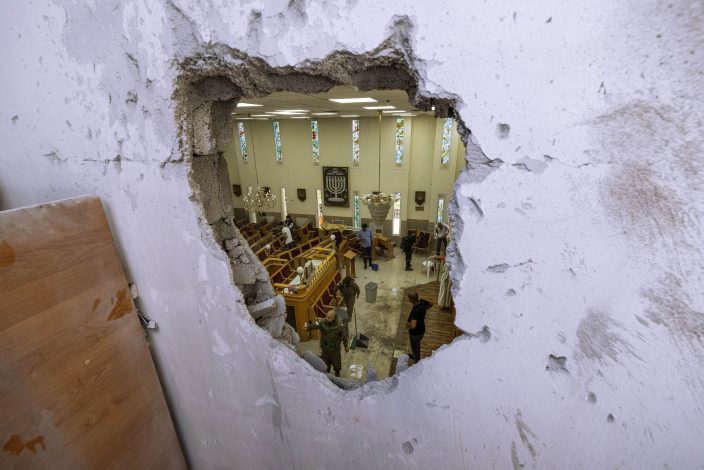 Israeli security forces inspect a damaged synagogue after it was hit by a rocket fired from the Gaza Strip, in Ashkelon, Israel, Sunday, May 16, 2021. (AP PhotoTsafrir Abayov)