The fuel used for the Paris-to-Montreal flight is part of efforts by the industry worldwide to experiment with alternative sources as regulators and governments tighten emissions rules for the coming decades. Other airlines and plane-makers are also experimenting with using varying levels of biofuels or different kinds of sustainable fuel.

The passenger jet took off with sustainable fuel making up 16% of its supply for the journey. Air France-KLM announced its initiative by the tarmac at Charles de Gaulle Airport in Paris. Joining France-KLM CEO Benjamin Smith at the event were Total oil company CEO Patrick Pouyanne and Airbus President Guillaume Faury. 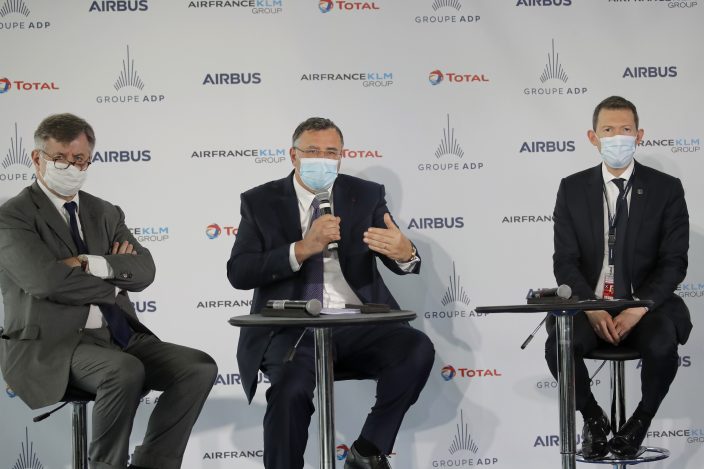 France’s transport minister, Jean-Baptiste Djebbari, called t proof that “there is another way. We show that the biggest part of the solution lies in technological innovation.”

Andrew Murphy of Brussels-based environmental advocacy group Transport and Environment said “it’s important that the industry is experimenting” with alternative fuels as the world appears to be coming out of the pandemic and travel resumes.

But Murphy said there is not enough used cooking oil in the world to meet global aviation needs — “There are not enough fries being made,” he said — and that there is a long way to go to significantly reduce airline emissions. 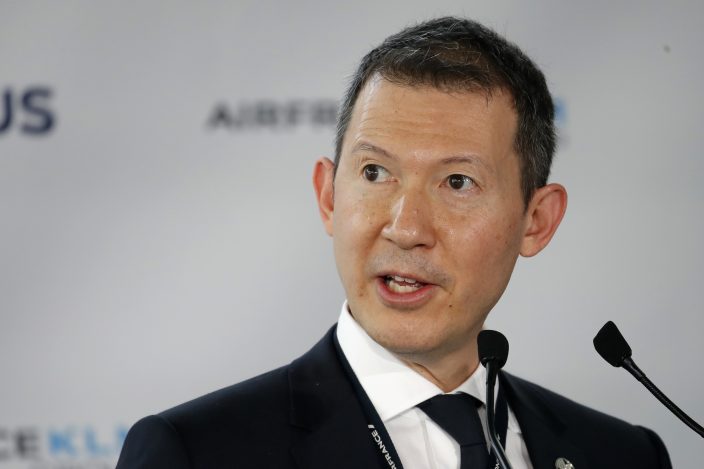 CEO of Air France-KLM Benjamin Smith speaks during a press conference at Roissy airport, north of Paris, Tuesday, May 18, 2021. Air France-KLM is sending into the air what it calls its first long-haul flight with sustainable aviation fuel Tuesday. The plane is said to be using petroleum mixed with a synthetic jet fuel derived from waste cooking oils. (AP PhotoChristophe Ena)

Air France-KLM is aiming to make 5% of its fuel sustainable by 2030. It claimed to make the first regular flight with synthetic sustainable aviation fuel, from Amsterdam to Madrid, in February.

Steve Csonka, executive director of the Commercial Aviation Alternative Fuels Initiative, welcomed the move, calling sustainable fuel “critical” in the reduction of carbon dioxide emissions for the whole jet-powered aviation industry. It will, he said, “represent the majority of the CO2 emissions reductions achievable by the industry over the next several decades."

Environmental organizations are pushing on other fronts. Airlines won’t make enough of a dent in global emissions “just by adding a very small quantity of agrofuel or biofuel,” Agathe Bounfour of the Climate Action Network in France said. “We need a drop in air traffic in order to comply with climate goals.”

A bill passed this month by France’s lower house of parliament aimed to do just tha, by banning domestic flights on routes that could be traveled by train in less than 2 1/2 hours. The measure drew attention in the global aviation industry, but it was watered down during parliamentary debate and now only affects a few flight routes.