For teams in the NHL playoffs Wednesday, there is comfort with having experience – particularly with a Vezina Trophy or a Stanley Cup winner — between the pipes.

Washington has the postseason's oldest goaltender with 39-year-old Craig Anderson, who has held his own against 2014 Vezina winer Tuukka Rask of Boston entering Game 3 of their first-round series. Edmonton hopes for the same from Mike Smith (also 39) entering its opener against Winnipeg’s reigning Vezina winner, Connor Hellebuyck.

There is also a Game 2 matchup of players who have been part of Cup-winning teams in Colorado’s Philipp Grubauer (2018 with Washington) and Jordan Binnington (2019) of St. Louis. 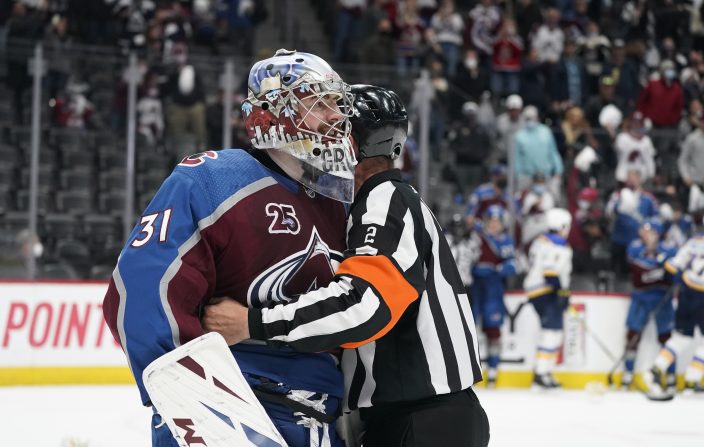 “I think playoff hockey’s a lot about experience,” said Smith, who watched Anderson’s Game 1 win against the Bruins. “You can’t tell a young player what playoffs are like until they’ve actually witnessed it themselves. It’s something that’s unique to a veteran player and a player that’s been in the playoffs a few times over the course of my career.”

Anderson stopped 44 shots Monday in the Capitals’ OT loss to the Bruins that evened their best-of-seven series. It was his first playoff start since 2017 and his third all season.

“As we get older, things become a little bit more difficult, so for Andy, he’s a veteran player,” Capitals coach Peter Laviolette said. “He’s been around, and he’s played a lot of games. The one thing that you’d like is to have that rhythm of playing games all the time so that he can keep his rhythm in the net, and he wasn’t afforded that luxury.”

The Nashville-Carolina series is the outlier. The Hurricanes gave 25-year-old Alex Nedeljkovic his first playoff start in Monday’s 5-2 win in Game 1 while fellow 26-year-old goalie Juuse Saros made his fifth career postseason start.

It’s unclear if Hurricanes coach Rod Brind’Amour will rotate goaltenders as he did last season to give Petr Mrazek a start after he missed significant time due to injuries.

“Yeah, Petr is our guy, but he’s had a lot of time off,” Brind’Amour said. “Not that I was questioning whether or not he could do it, it just gave Ned an opportunity this year. I just felt like he earned the start.”

The status of St. Louis leading scorer David Perron is unclear for Game 2 after he missed Monday's 4-1 loss due to the league’s COVID-19 protocols.

Regardless, the Blues need to slow Colorado’s speedy top line.

The combination of captain Gabriel Landeskog, Nathan MacKinnon and Mikko Rantanen accounted for three goals, five assists, 16 shots and a fighting major, which was courtesy of Landeskog after he stood up for Rantanen following a big first-period hit.

The Avalanche finished with a 50-23 edge in shots, breaking through for three third-period goals.

“It’s not going to start going in because you start over-passing or looking for the perfect play,” Landeskog said. "You’ve got to keep throwing pucks there.”

The NHL’s leading scorer starts the playoffs as Connor McDavid and Edmonton open against Winnipeg. McDavid put up 105 points in 56 games and is “as motivated as you can be” going for the Stanley Cup.

“That’s the ultimate goal, and all those other (awards) don’t really mean anything unless you win,” McDavid said. “It’s always what I’ve wanted to do. I have an opportunity here with this group to play a good Jets team and go from there.”

The Predators tinkered with their Game 1 lineup to add size, but Carolina pulled away with three third-period goals.

“We’ve talked a lot about lineup changes and who’s in and who’s out,” coach John Hynes said Tuesday. 'But you know, there’s lots of players that are in the lineup that don’t really ever come out and they need to be better.

There was at least one positive: The Predators killed off all four power plays against a team ranked second in the NHL with the man advantage.

After back-to-back overtime games and nine consecutive one-goal postseason games between Washington and Boston, don’t expect any less in Game 3.