The Milwaukee Brewers activated Christian Yelich from the injured list Tuesday and expect the two-time All-Star to play for just the second time in five weeks when they open a two-game interleague set in Kansas City.

Yelich played nine games to start the season before leaving with stiffness in his lower back on April 11 in St. Louis. He tried to return on May 3 in Philadelphia but played just one game before returning to the injured list.

“I'm just excited to be back in there and contribute at some level,” Yelich said. 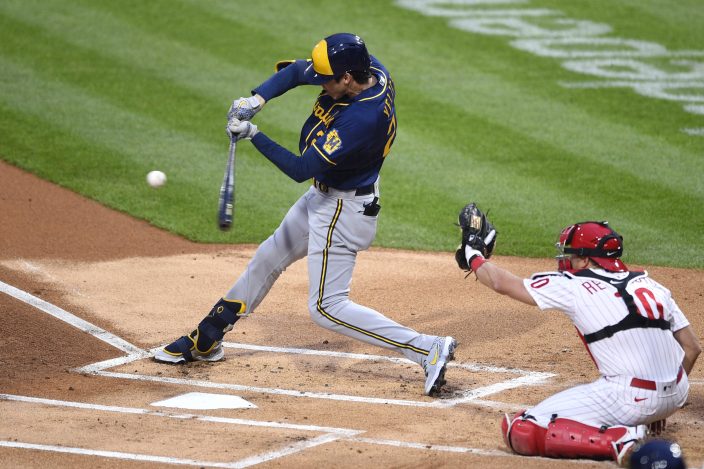 Milwaukee Brewers' Christian Yelich, left, hits a single during the first inning of a baseball game in front of Philadelphia Phillies' J.T. Realmuto (10), Monday, May 3, 2021, in Philadelphia. (AP PhotoDerik Hamilton)

Brewers manager Craig Counsell said the 2018 National League MVP underwent some different training methods during his last IL stint and Yelich's back finally showed some improvement. He wound up playing three consecutive rehab games at Triple-A Nashville over the weekend, going 0 for 5 with a pair of walks while playing in the outfield.

More importantly than the numbers, Yelich experienced none of the pain that has sidelined him for 31 games this season.

“It was more just proving to the team that I could play back-to-back-to-back days and not have any issues like I had in Philly,” he said. "That was kind of the purpose of the rehab assignment, to get multiple days playing and kind of avoid the Philly situation like last time, where I felt OK and then after the game and the next day I just wasn't good.

“I feel confident now,” Yelich added, “and I'm looking forward to being back.”

Yelich is hitting .353 but has no homers and just one RBI in 41 plate appearances this season. While the contact rate is a welcomed turnaround from the .205 average he had during the pandemic-shortened 2020 season, the lack of power could be due largely to the recurrence of back trouble that Yelich has played through for much of his career.

“It's just a combination of things,” Yelich said. “When your back bothers you, it sucks to do everything. It's just one of those things. I had to get better and play the field and hit and do everything down there those few days.”

His return should provide a boost in confidence — if not some on-field production — for a club that has struggled to score runs the past few weeks. The Brewers were 17-10 and in first place on May 1 but have lost 10 of their last 14 games, twice getting shut out and scoring a single run in three other games.

“I think we were all following his games down in Nashville, and more importantly, trying to get the updates from the training staff to see if he was bouncing back in the days afterward,” said Corbin Burnes, who will start Wednesday's game in Kansas City. “It's good to see him back. We expect big things when he's in there.”

Wait a minute — did the training staff actually provide some intel?

“Nah, it was pretty hush-hush,” Burnes said. “It was pretty much like, ‘Oh, he’s good.' We were all just keeping an eye on it and just seeing how he's doing. We wanted him back. He's a big piece of our lineup.”

Brewers' Yelich knows he had fortunate timing on new deal