This time beaten by Chelsea, Leicester’s FA Cup celebrations have been quickly deflated by seeing its Champions League hopes jeopardized.

Chelsea dislodged Leicester from third place heading into the Premier League finale with a 2-1 victory on Tuesday to leave Champions League qualification in its own hands.

Timo Werner had two goals disallowed in the first half after VAR reviews, infuriating Stamford Bridge's first crowd of 2021. But Antonio Rüdiger scored his first goal in 15 months by bundling home Ben Chilwell’s deflected corner with his thigh and Jorginho netted a penalty awarded after VAR determined Werner was brought down by Wesley Fofana. 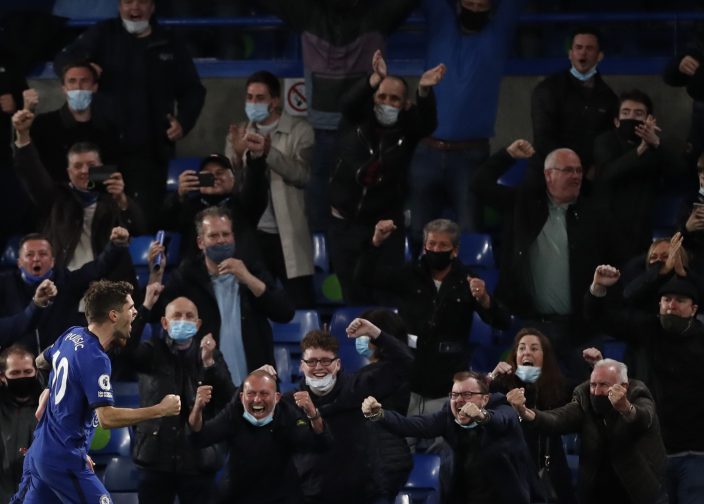 Chelsea's Jorginho celebrates after scoring his side's second goal from penalty during the English Premier League soccer match between Chelsea and Leicester City at Stamford Bridge Stadium in London, Tuesday, May 18, 2021. (Peter CziiborraPool via AP)

Kelechi Iheanacho side-footed in for Leicester to set up a nervy finish, but Ayoze Perez missed a golden chance to equalize as Chelsea avenged Saturday’s loss to Leicester in the FA Cup final.

Beat Aston Villa on the road on Sunday and Chelsea will seal Champions League qualification for next season. There is always the backup route into the competition — by beating Manchester City in the May 29 final. 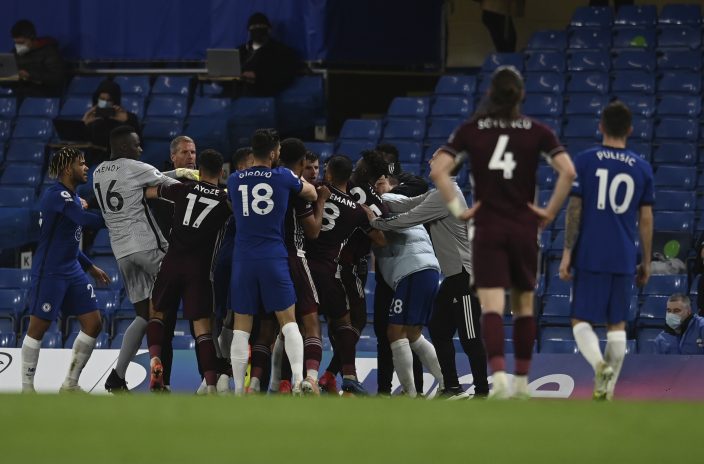 Leicester City and Chelsea players clash during the English Premier League soccer match between Chelsea and Leicester City at Stamford Bridge Stadium in London, Tuesday, May 18, 2021. (Glyn KirkPool via AP)