LeBron James and Steph Curry are used to meeting in the spring with an NBA championship up for grabs.

The stakes will be so much different when they face each other this time: they will just be vying for a playoff spot. 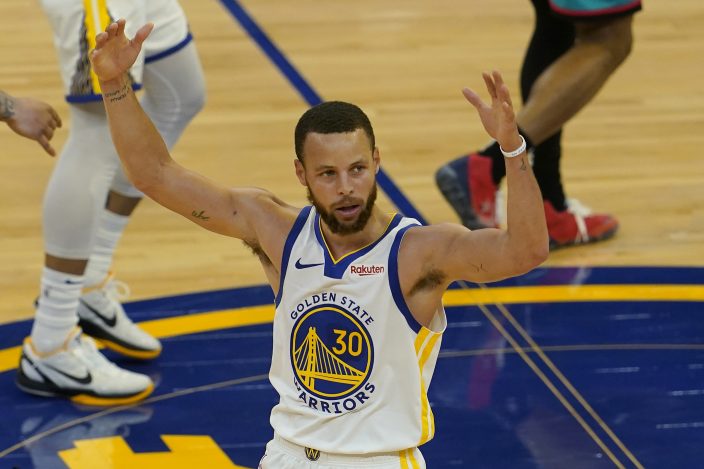 Golden State Warriors guard Stephen Curry (30) reacts after shooting a 3-point basket against the Memphis Grizzlies during the second half of an NBA basketball game in San Francisco, Sunday, May 16, 2021. (AP PhotoJeff Chiu)

“I don’t know what else to say about Steph, we’ve been through this all year,” coach Steve Kerr said of the two-time league MVP. “One game to the next it’s very difficult to express just how good he is, what an amazing teammate he is, everything that he brings to the table, leadership, the example that he sets every day and then of course the brilliant shot-making.”

James has said Curry should be this year's MVP.

“I don’t know anything else if you’re looking for an MVP. If Steph is not on Golden State’s team, what are we looking at? We get caught up in the records sometimes,” he said. “Steph has had, in my opinion, the best season all year.”

James, who is averaging 25.0 points, 7.7 rebounds and 7.8 assists in 45 games, has played in only four games since originally suffering a sprained right ankle March 20.

This will be the 23rd postseason game between James and Curry. Golden State and Cleveland faced off in four straight NBA Finals from 2015-18, with Cleveland capturing the city’s first NBA championship in 2016 as James and Co. won Game 7 on the Warriors’ home floor.

“It will be a different scenario, another chapter in it, but at the end of the day you expect greatness,” Curry said.

Both teams ended the regular season on winning streaks. The defending NBA champions — who didn't win consecutive games for nearly six weeks — have taken their last five and Golden State has won its last six.

The winner Wednesday will be the seventh seed and can start preparing for a first-round matchup against Phoenix. The loser will face either No. 9 seed Memphis or 10th-seeded San Antonio on Friday for the right to face No. 1 seed Utah.

“We know it’s a one-game thing and can’t afford to lose. We definitely want to get in that seventh seed and get a couple days off to lock in on our opponent and tighten our screws with a healthy team,” Lakers forward Anthony Davis said.

Golden State won their first meeting 115-113 on the Lakers' floor on Jan. 18 when it rallied from a 14-point, fourth-quarter deficit. It was the first time in 284 home games that James and his team took a double-digit lead into the fourth quarter and lost in regulation.

Sure, Draymond Green has been as dependable as ever. It’s the other Warriors on the roster who have taken quite a load off Curry when he needed help.

Kerr has pegged Jordan Poole as a likely sixth man next season when Klay Thompson returns from missing a second straight season with an injury. Andrew Wiggins played all but one game in the regular season, resting a sore knee for Friday’s win against New Orleans that didn’t impact the seedings. Golden State had to beat Memphis in Sunday’s regular-season finale to secure the play-in No. 8 spot.

“I’m proud of the way that we’ve led this charge and set a standard of what winning basketball is, but also the understanding that it looks totally different than it used to. But at the end of the day, when games like these come around that we’re prepared for it. Hopefully, that confidence is contagious among the other guys,” Curry said.

Davis is averaging 22 points and 7.4 rebounds in 12 games since returning from a calf injury that sidelined him for two months. He missed one game last week due to a groin injury, but that one was the back half of consecutive games.

The All-Star forward could see the bulk of his time at center, but Andre Drummond is starting to round into form with four straight double-doubles. That could allow Davis to see more time at forward.