A rebel leader who abandoned the 2016 peace accord with Colombia’s government and had been at large for three years was killed by Colombian troops in Venezuela, his new armed moved said Tuesday.

Seuxis Hernandez — known more commonly by his nom de guerre of Jesus Santrich — was one of the chief negotiators for the Revolutionary Armed Forces of Colombia in peace talks with the Colombian government. But he gave up on the peace deal less than two years following its signing after he was indicted in the U.S. for alleged cocaine trafficking.

In a statement posted on its website, Santrich's new rebel group, the Second Marquetalia Movement, said the 53-year-old insurgent was killed Monday by a Colombian commando unit that illegally entered Venezuelan territory. 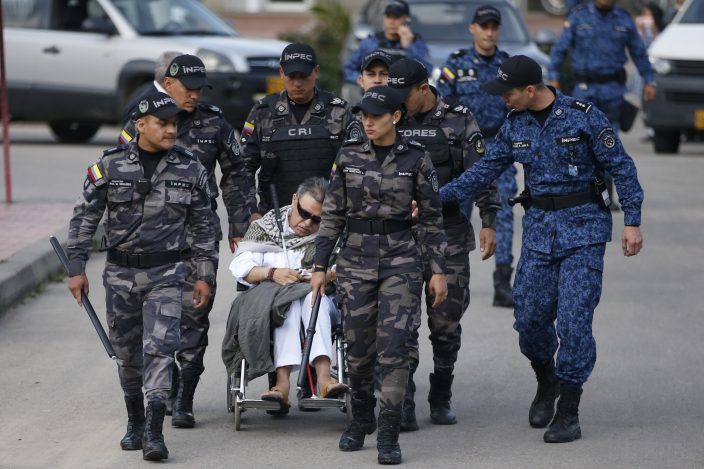 FILE - In this May 17, 2019 file photo, former rebel leader Seuxis Hernandez, known by his alias Jesus Santrich, leaves La Picota jail escorted by prison guards in Bogota, Colombia. Santrich was recaptured and taken back into custody by authorities as soon as he was released from jail. The rebel leader who abandoned a 2016 peace deal with Colombia’s government and had been at large for three years was killed in Venezuela on Monday, May 18, 2021, according to a statement published by his new armed movement. (AP PhotoFernando Vergara, File)

The group said Santrich was riding in a vehicle in the western Venezuelan state of Zulia when he was attacked with grenades and gunfire by Colombian soldiers. The troops cut off Santrich's pinky finger before returning to Colombia in a yellow helicopter, the statement said.

Colombia's government did not immediately comment on the group's claim, which would constitute a major breach of Venezuela's sovereignty and heighten tensions with President Nicolas Maduro's socialist government. There also was no comment from the Venezuelan government.

Earlier Tuesday, Colombia's defense minister said the government was trying to confirm reports that Santrich had been killed in a battle between rebel groups operating in Venezuela. 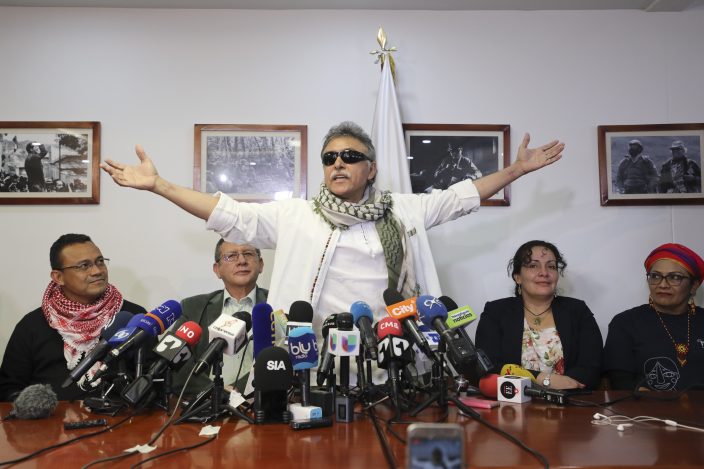 FILE - In this May 30, 2019 file photo, former rebel leader Seuxis Hernandez, also known as Jesus Santrich, opens his arms during a press conference at the FARC party headquarters after he was freed from his second detention in connection with a drug case in Bogota, Colombia. The rebel leader who abandoned a 2016 peace deal with Colombia’s government and had been at large for three years was killed in Venezuela on Monday, May 18, 2021, according to a statement published by his new armed movement. (AP PhotoFernando Vergara, File)

Several other versions of Santrich's death were published by Colombian media, including one account that said he was killed by mercenaries who wanted to capture him and claim a $10 million reward offered by the U.S. State Department last year.

Santrich was a member of leftist youth groups in Colombia and entered the FARC in the early 1990s, after one of his fellow student leaders was killed by a Colombian police officer in the city of Barranquilla. Santrich was going blind from a genetic condition by the time the rebel group began peace talks with Colombia's government, but had established himself as one of the group's leading ideologues.

Soon after the peace accord between the FARC and Colombia's government was signed, Santrich ran into problems with law enforcement. He was arrested in April 2018 after U.S. authorities in New York charged him with conspiring to traffic 10 tons of cocaine to the United States. The charges were based on videos and audio recordings obtained by undercover agents who met with Santrich in 2017, prosecutors said.

But Santrich was released from jail before he could be extradited after Colombia’s peace tribunal determined that U.S. authorities had not provided enough evidence. Under the terms of the peace deal, former rebels cannot be extradited for crimes committed during the war, but can be held responsible for any crimes committed afterwards.

Santrich, who accused the Colombian government of attempting to frame him, briefly took possession of a congressional seat awarded to the FARC as part of the peace deal. But during a visit to a village for former rebels near the border with Venezuela, he abandoned his security detail and disappeared.

In August 2018, he appeared on a Youtube video in which a group of former FARC rebels brandishing machine guns announced that they would continue to fight the government, accusing if of failing to fulfill promises made in the peace accord. They called their new organization the Second Marquetalia Movement in a nod to the peasant village that in the 1960s gave birth to the original FARC guerrilla movement.

Santrich's group was widely rejected by former FARC leaders who stuck with the peace deal and have now formed a political party that has 10 seats in Colombia’s congress.

Colombian officials say Santrich’s faction of former FARC dissidents is attempting to take over illegal mines and drug trafficking routes along a remote stretch of Colombia’s border with Venezuela.

Colombia has long accused Venezuela of providing refuge to former FARC fighters, including Santrich and Ivan Marquez, the leader of the Marquetalia movement who is also wanted by the U.S. as part of the same drug indictment. But lately the Venezuelan army has also been engaged in fighting with another faction of former FARC fighters led by Gentil Duarte, which captured eight Venezuelan soldiers in May.