Matt Chapman hit a tying double in the eighth after Canha's sacrifice fly the previous inning. 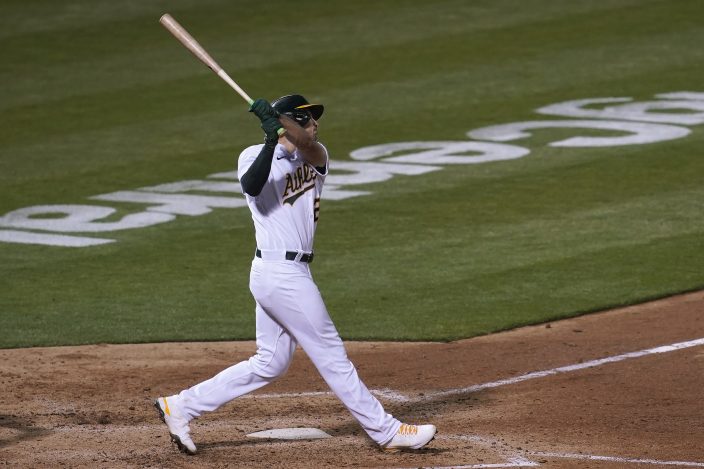 Oakland Athletics' Matt Olson follows through on a solo home run against the Houston Astros during the sixth inning of a baseball game in Oakland, Calif., Tuesday, May 18, 2021. (AP PhotoJeff Chiu)

Yusmeiro Petit (5-0) pitched the ninth for the win.

Defending AL West champion Oakland moved 1 1/2 games up on the Astros and stopped their longest winning streak of the season.

Kyle Tucker homered and Yordan Álvarez hit a two-run double in the first for Houston. 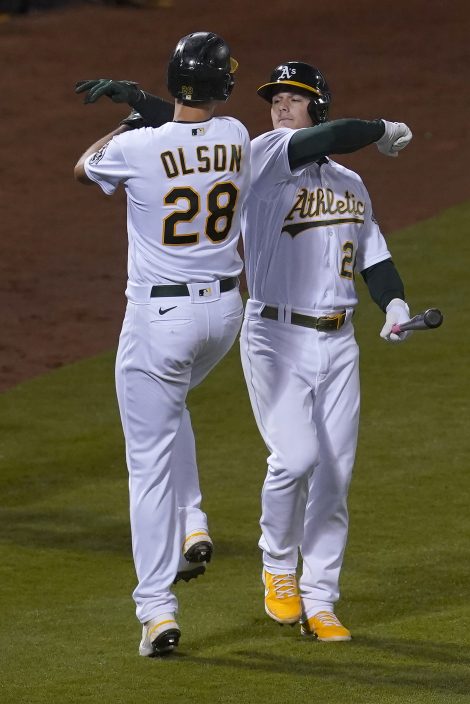 Oakland Athletics' Matt Olson (28) is congratulated by Matt Chapman after hitting a solo home run against the Houston Astros during the sixth inning of a baseball game in Oakland, Calif., Tuesday, May 18, 2021. (AP PhotoJeff Chiu)

Laureano hit solo shots in the first and fourth against Javier to give him 10 homers. He's tied for the team lead with Matt Olson, who hit his 10th in the sixth.

Jose Altuve went 2 for 5 and extended his hitting streak to 12 games, his first string of 12 or more games since a career-best 19-game hitting streak in 2017. 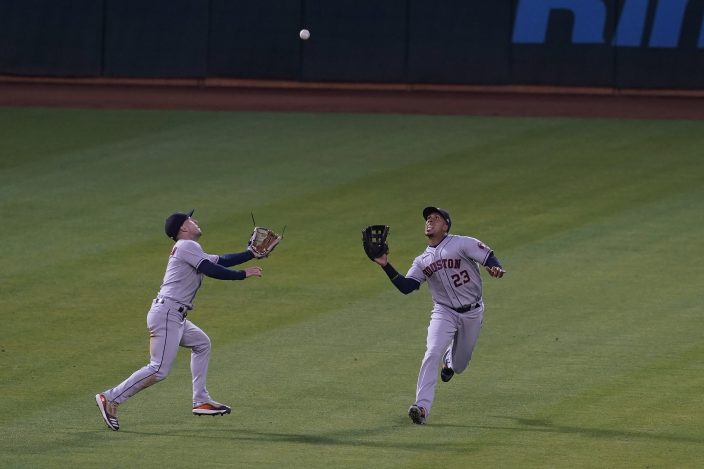 The Astros are 17-8 dating to April 22, winning six of their last seven series.

Astros manager Dusty Baker got to watch son Darren, the second baseman for California, play at Stanford on Monday night — a 7-6, 12-inning defeat for the Golden Bears to their rival. 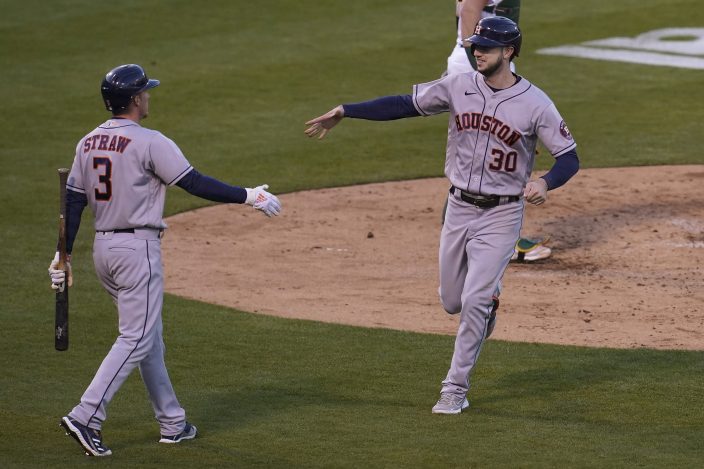 Houston Astros' Kyle Tucker (30) is congratulated by Myles Straw (3) after hitting a solo home run during the fourth inning of the team's baseball game against the Oakland Athletics in Oakland, Calif., Tuesday, May 18, 2021. (AP PhotoJeff Chiu)

“I got kind of sleepy and cold out there. My son, he had a little tough go yesterday,” Baker said of Darren's 1-for-6 day. “It was a tough game but I'm glad I got to see him play.”

When Houston heads home, the Astros will be able to see more faces in the crowd at Minute Maid Park — and potentially even a full house as the ballpark can now bring in fans to fill the venue to full capacity for the remainder of the year. 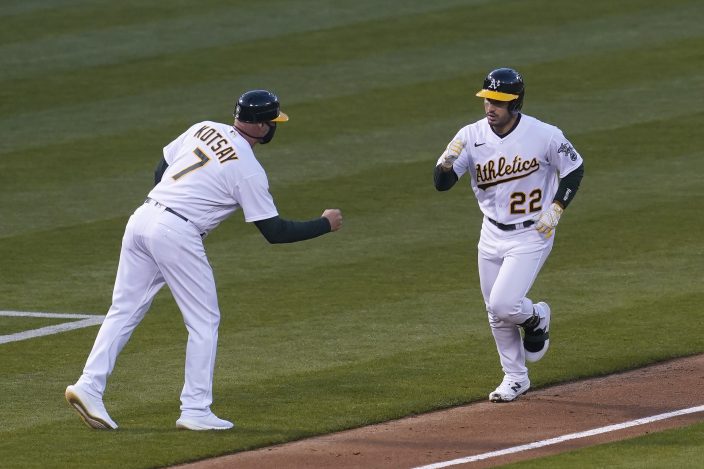 Oakland Athletics' Ramon Laureano, right, is congratulated by third base coach Mark Kotsay (7) after hitting a home run against the Houston Astros during the fourth inning of a baseball game in Oakland, Calif., Tuesday, May 18, 2021. (AP PhotoJeff Chiu)

“We're entertainers, and we need that certain energy from our fans,” Baker said.

Fans who are fully vaccinated are no longer required to wear masks inside the stadium.

“It's important that it's still safety first, but at the same time we love having our fans and the support that they bring us day in and day out,” left fielder Michael Brantley said. “We have some of the best fans in MLB so it's always appreciated when we have a full house and we have their support behind us.” 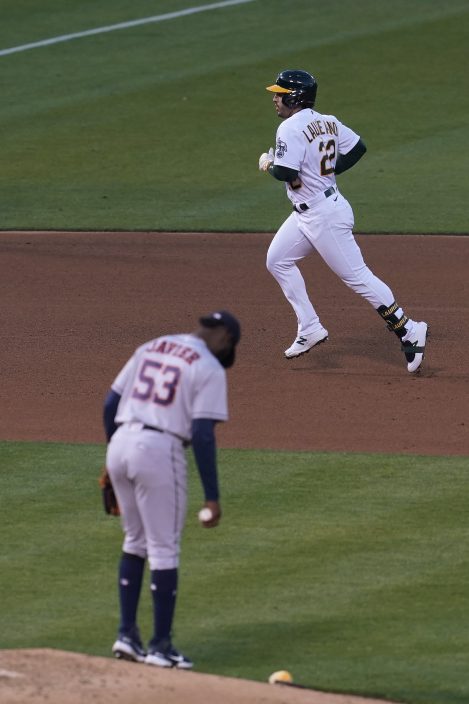 Oakland Athletics' Ramon Laureano, top, runs the bases after hitting a home run off of Houston Astros pitcher Cristian Javier (53) during the fourth inning of a baseball game in Oakland, Calif., Tuesday, May 18, 2021. (AP PhotoJeff Chiu)

Astros: RHP José Urquidy, sidelined with discomfort behind his shoulder, threw on flat ground and “came out of it great” in his rehab and could be ready to pitch off a mound in the coming days, according to Baker.

Athletics: SS Elvis Andrus had just his second day off of the season. ... The A’s placed designated hitter Mitch Moreland on the 10-day injured list retroactive to Friday with inflammation between ribs on the left side. Moreland had missed the last two games at Minnesota over the weekend with the injury. It's unclear how long he will be sidelined, and Moreland's workload in the cage will be limited for now. ... Oakland recalled OF Luis Barrera from Triple-A Las Vegas for his first stint in the big leagues. “I've been impressed with him for a couple of springs, I told him that,” manager Bob Melvin said. “Special day for him.” ... RHP J.B. Wendelken (strained left oblique) began throwing a sock in his rehab, "which he was excited about because he actually got to throw something." ... LHP Jesús Luzardo (broken pinkie) threw on flat ground Monday out to 120 feet. 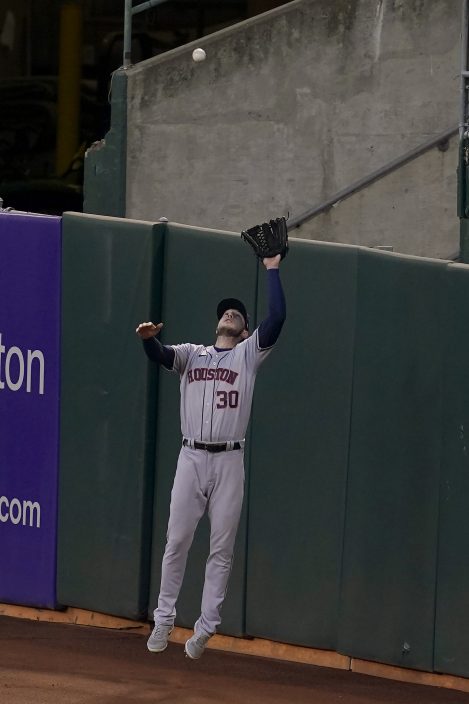 Houston Astros right fielder Kyle Tucker (30) jumps for and makes the catch on a fly ball hit by Oakland Athletics' Chad Pinder during the fifth inning of a baseball game in Oakland, Calif., Tuesday, May 18, 2021. (AP PhotoJeff Chiu) 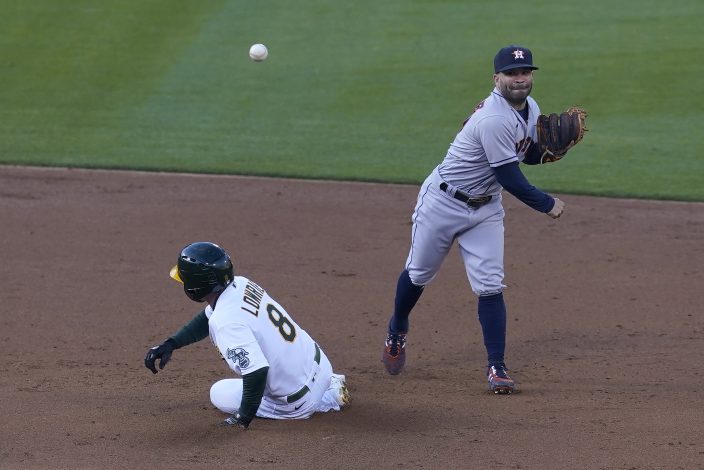 Houston Astros second baseman Jose Altuve, right, throws to first base after forcing out Oakland Athletics' Jed Lowrie (8) at second base on a double play hit into by Sean Murphy during the second inning of a baseball game in Oakland, Calif., Tuesday, May 18, 2021. (AP PhotoJeff Chiu) 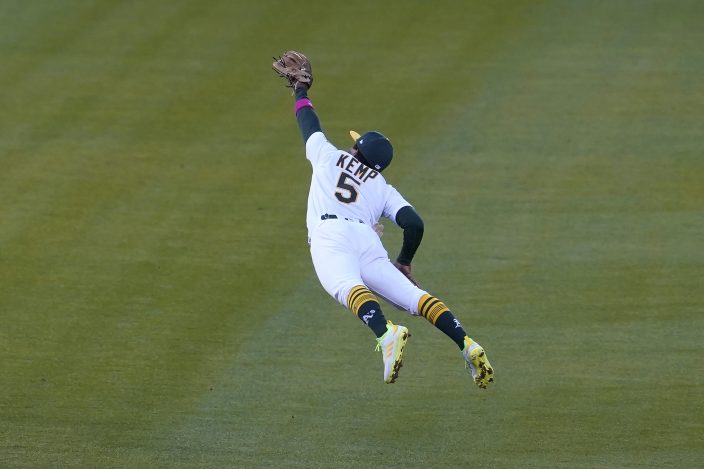