Craig Smith scored 5:48 into the second overtime Wednesday night to give the Boston Bruins a 3-2 victory over the Washington Capitals and a 2-1 lead in the East Division first-round playoff series.

Smith outraced defenseman Justin Schultz to a puck behind the Capitals net and swept it around into the goal to end the third straight overtime game in the series. It was the 11th straight one-goal playoff game between them since 1998. 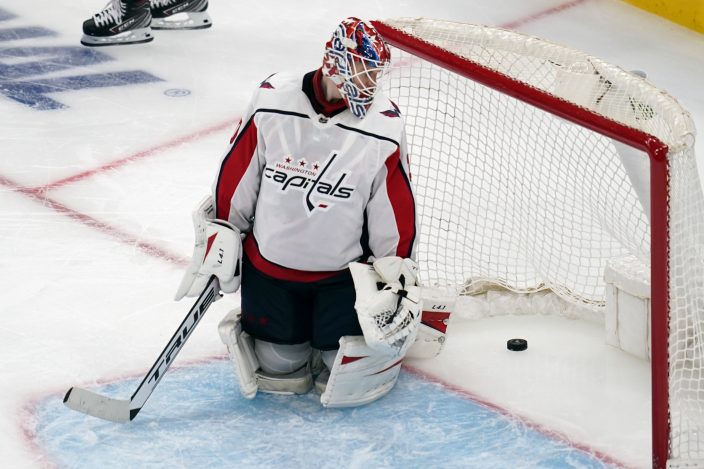 Washington Capitals goaltender Ilya Samsonov (30) looks back at the puck after giving up the game-winning goal to Boston Bruins right wing Craig Smith during a second overtime period of Game 3 of an NHL hockey Stanley Cup first-round playoff series, Wednesday, May 19, 2021, in Boston. The Bruins won 3-2. (AP PhotoCharles Krupa)

Alex Ovechkin scored his 800th combined regular-season and postseason goal, and Nic Dowd returned from a slap shot off the knee to add a goal for Washington. Ilya Samsonov returned from the COVID-19 list to make his playoff debut, stopping 40 shots for Washington, which lost the home-ice advantage after splitting the first two games at home.

Game 4 is Friday night in Boston.

The game was the third in a row between the teams to close the season after the Canucks’ schedule was pushed back by COVID-19 outbreak.

Dillon Dube, Andrew Mangiapane, Brett Ritchie and Connor Mackey, with his first career NHL goal, also scored for the Flames, and Jacob Markstrom stopped 19 shots. At 26-27-3, they ended up four points behind Montreal for the final playoff spot.

Bo Horvat and J.T. Miller scored for the Canucks. They finished last in the seven-team North, a point behind Ottawa.