Opening Day at the PGA Championship essentially wound up a draw.

Good shots were rewarded, bad ones predictably punished and the Ocean Course -- reliably backed up by stiff breezes off the Atlantic -- came out of it looking like anything but a pushover. Canadian Corey Conners posted a 5-under 67, but it came on a day when the field averaged 75 and a quartet of pre-tournament picks landed right on that number or worse: Rory McIlroy and Justin Thomas (75), Dustin Johnson (76) and Daniel Berger (78).

For all that, no one’s feelings were badly bruised … except maybe Bryson DeChambeau’s. He recovered from four straight bogeys to finish at even-par 72, but appeared still out of sorts afterward. Recounting his round in a press conference. DeChambeau mixed up some holes, acknowledged he struggled with the heat and some bad breaks and found it nerve-wracking trying to constantly factor in the wind speed and direction, even on short putts. 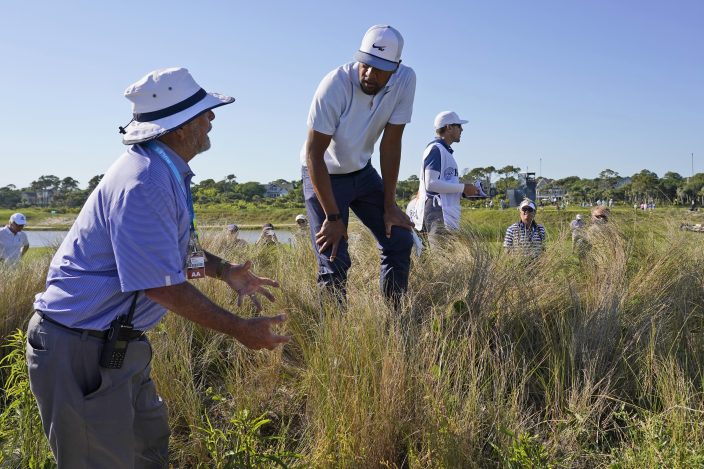 Tony Finau, right, Gets a ruling on the 16th hole during the first round of the PGA Championship golf tournament on the Ocean Course Thursday, May 20, 2021, in Kiawah Island, S.C. (AP PhotoChris Carlson)

The woe-is-me litany continued until a reporter, citing DeChambeau’s practice and preparation fetish, seemed genuinely concerned about his health, asking, “Are you close to a point of exhaustion?”

“No, I’m not like at wit’s end or anything … but this golf course takes it out of you,” DeChambeau said. “This is the most difficult golf course that I’ve played on Tour, and that is a straight-up fact for me.”

Conners chose a simpler practice regimen and it paid off handsomely. He drew up a plan on where to attack the course and where to take extra precautions, then banked on the winds following the same pattern they had during practice rounds. When that piece fell into place, the 29-year-old Canadian found his shots both into the wind and against it behaving pretty much the way he expected.

Jordan Spieth reaches for a club on the 11th hole during the first round of the PGA Championship golf tournament on the Ocean Course Thursday, May 20, 2021, in Kiawah Island, S.C. (AP PhotoMatt York)

“You can’t fall asleep out there on any holes,” Conners said. “It’s very challenging. I was fortunate to have a good day. Made it the least stressful on myself as possible.”

Good thing, too, since plenty of stress is lined up behind him. A half-dozen players, including majors specialist Brooks Koepka, were two shots back at 69, and mixed into the group of eight players at 70 were defending champion Collin Morikawa, former U.S. Open champion Gary Woodland and improbably, perhaps, 50-year-old Phil Mickelson.

Lefty started 3-over through six holes, but made up a lot of ground with a 32 on the back nine, where the field averaged 38. 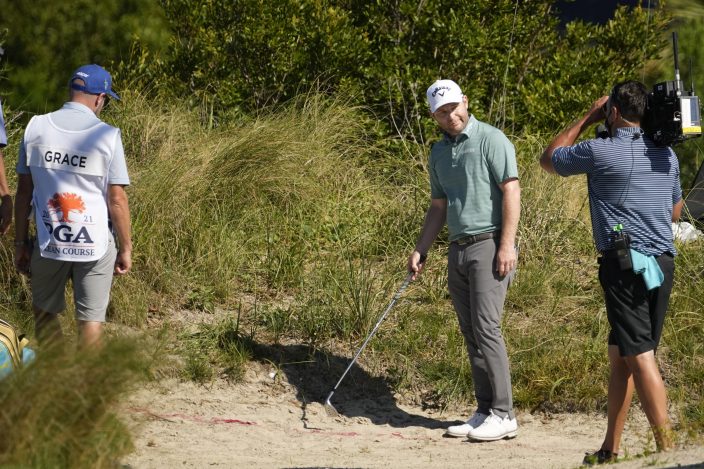 Brendan Grace, of South Africa, prepares to take a drop due to an unplayable lie on the second hole during the first round of the PGA Championship golf tournament on the Ocean Course Thursday, May 20, 2021, in Kiawah Island, S.C. (AP PhotoDavid J. Phillip) 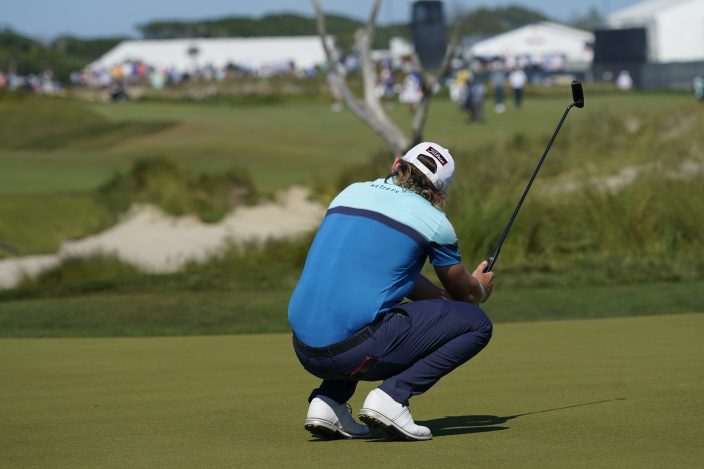 Cameron Smith, of Australia, reacts to a putt on the 11th hole during the first round of the PGA Championship golf tournament on the Ocean Course Thursday, May 20, 2021, in Kiawah Island, S.C. (AP PhotoMatt York)

“It’s there,” someone on the tee box reassured him. But a heartbeat later, aided by the wind, his ball keeps rolling, slides off the back of the green and down into a swale.

“Damn,” Spieth says the second after that, “you've got to be kidding me.”

Hardly. Yet that was far from the strangest moment of the day. That belonged to Sebastian Munoz, who was hardly the only golfer to pull his tee shot well left and off the 18th fairway. The difference is that he had to retrieve his from a plastic trash bag set up in front of the grandstand on that side.

Wyndham Clark points to the direction of an errant tee shot on the eighth hole during the first round of the PGA Championship golf tournament on the Ocean Course Thursday, May 20, 2021, in Kiawah Island, S.C. (AP PhotoMatt York)

Munoz promptly handed the ball to a nearby spectator, took a free drop and made par with his replacement ball. As it turns out, because the right side of the 18th fairway is protected by a bunker complex, hitting a tee shot into the grandstand and taking that same free drop became a popular option.

“I wasn’t trying to hit it in there by any means, but definitely from that up tee (in use Thursday), it’s in play,” said former PGA champion Keegan Bradley, who shot 69. “I feel bad for all those people up there. They’d better have their hard hats on today. They’re going to be firing them in there all day.”

Expect the PGA of America, which sets up the course, to move that tee and a host of others farther back for Round 2. The Ocean Course, the longest ever for a major championship, played at 7,660 yards for the opener -- 178 yards shorter than the scorecard – and a little more wiggle room is the last thing a field that’s already wobbling is likely to welcome.

Day trying to regain form, knowledge of Kiawah ahead of PGA