The head of Myanmar’s military-appointed state election commission said Friday that his agency will consider dissolving Aung San Suu Kyi's former ruling party for its alleged involvement in electoral fraud and have its leaders charged with treason.

Suu Kyi’s National League for Democracy party first came to power after a landslide 2015 election victory, and won an even greater majority in last November’s general election. It was set to start a second term in February when the military seized power in a coup, arresting her and dozens of top government officials and party members.

Junta leader Senior Gen. Min Aung Hlaing cited electoral fraud as the justification for the army’s takeover, saying “there was terrible fraud in the voter lists.” The army-backed Union Solidarity and Development Party, which suffered unexpectedly heavy losses in the election, made similar allegations. 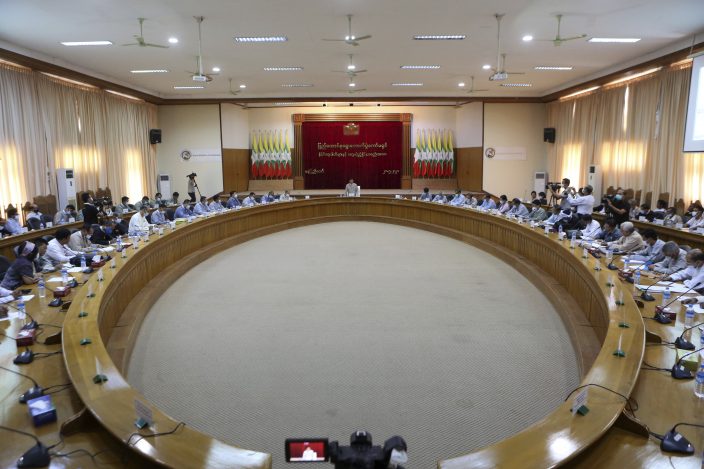 The Union Election Commission meets with representatives of various political parties Friday, May 21, 2021, in Naypyitaw, Myanmar. The head of Myanmar's military-appointed state election commission said Friday his agency will consider dissolving the former ruling party of Aung San Suu Kyi for its alleged involvement in electoral fraud, and have its leaders charged with treason. (AP Photo)

Political parties were called to discuss planned changes in the electoral system at a meeting Friday, There, Union Election Commission chairman Thein Soe said an investigation of last year's election that would soon be completed showed that Suu Kyi's NLD had illegally worked with the government to give itself an advantage at the polls. 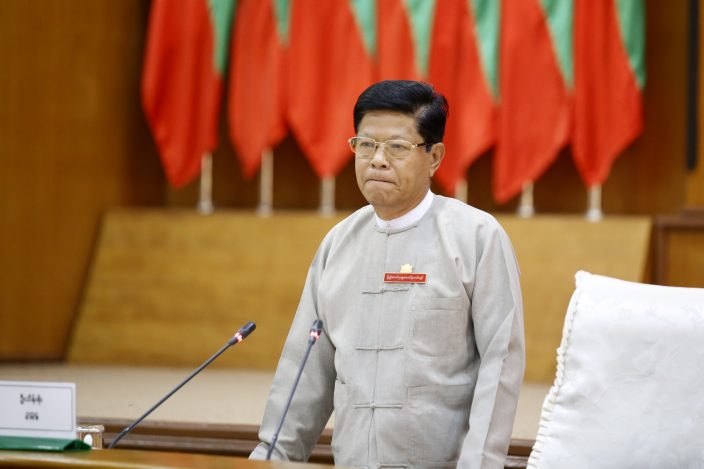 Union Election Commission Chairman Thein Soe stands during a meeting with representatives of various political parties Friday, May 21, 2021 in Naypyitaw, Myanmar. The head of Myanmar's military-appointed state election commission said Friday his agency will consider dissolving the former ruling party of Aung San Suu Kyi for its alleged involvement in electoral fraud, and have its leaders charged with treason. (AP Photo)

The NLD, which has thrown its weight behind the mass popular movement against the military takeover, has faced constant harassment since the coup, with its members arrested and offices raided and closed.

The junta initially announced that it would hold new elections a year after taking power, but later hedged and said the delay could be up to two years. Before the start of democratic reforms a decade ago, Myanmar was ruled by the military for 50 years.

The NLD also won a 1990 election, but the military stepped in to prevent it from taking power.

Suu Kyi and other members of her government already face various criminal charges that could keep them from running in the next election. Their supporters assert all the charges are politically motivated.

The announced purpose of Friday’s commission meeting was to discuss the junta’s plan to change the country’s election system from “first past the post” to proportional representation.

In first past the post systems, the candidate with the most votes in a given constituency is the winner, while in proportional representation, the share of winning parliamentary seats in an area with several seats is allocated according to the proportion of the vote won by each party or candidate.

Almost all the major parties — including the NLD — refused to go to Friday’s commission meeting, as they regard the body as illegitimate.

Local media reported that almost a third of parties boycotted the gathering in the capital, Naypyitaw. Many of the 62 attending were pro-military organizations that polled badly in last November’s election, failing to win a single seat.

After taking power, the military dismissed the old members of the election commission and appointed new ones. It also detained some members of the old commission, and according to reports in independent Myanmar media, pressured them to confirm there had been election fraud. The new commission declared the last election's results invalid.

A non-partisan election monitoring organization said this week that the results of last November’s voting were representative of the will of the people, rejecting the military’s allegations of massive fraud.

The Asian Network for Free Elections said in a report that it “lacked sufficient information to independently verify the allegations of voter list fraud” because the election law did not allow it access to voting lists, but that it had not seen any credible evidence of any massive irregularities.

However, the group also called Myanmar’s electoral process “fundamentally undemocratic” because its 2008 constitution, implemented under army rule, grants the military an automatic 25% share of all parliamentary seats, enough to block constitutional changes.

It also noted that large sectors of the population, most notably the Muslim Rohingya minority, are deprived of citizenship rights, including the right to vote.

The military ruled Myanmar from 1962 up to 2011, when a quasi-civilian administration backed by the army took over.

Save the Children staff confirmed dead in Myanmar massacre

Save the Children says staff missing after Myanmar massacre