Three years since winning the Stanley Cup, the Washington Capitals find themselves on the brink of their third consecutive first-round playoff loss.

The Boston Bruins will eliminate the Capitals on Sunday night with a win in Game 5 (7 p.m. EDT, USA Network). The series winner will face either the Pittsburgh Penguins or New York Islanders in the second round in the East Division.

Capitals coach Peter Laviolette was behind the bench for Philadelphia in 2010 when the Flyers erased a 3-0 series deficit to beat, yep, you guessed it, the Bruins. 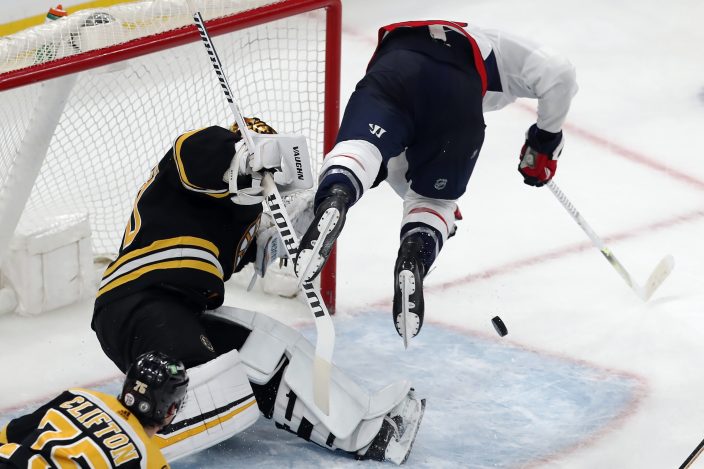 The 2019 champion St. Louis Blues also are on the verge of a second consecutive first-round exit, down 3-0 to the Presidents’ Trophy-winning Colorado Avalanche going into Game 4 (5 p.m., NBC Sports Network). Blues coach Craig Berube was on Laviolette’s staff in 2010 and talked to his team about that series Saturday morning.

“We won a game, you get some confidence,” Berube said. “You win another one, and then it’s a series.” 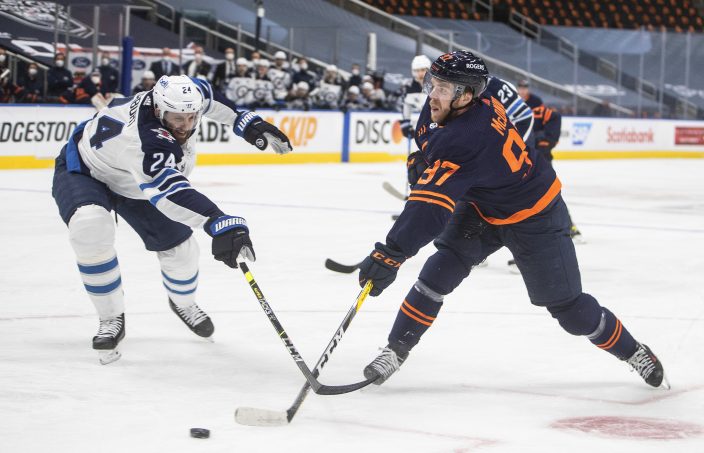 Edmonton Oilers' Connor McDavid (97) gets the shot away as Winnipeg Jets' Derek Forbort (24) defends during the second period of Game 2 of an NHL hockey Stanley Cup first-round playoff series Friday, May 21, 2021, in Edmonton, Alberta. (Jason FransonThe Canadian Press via AP)

While Laviolette said he could make a lineup change or two, the Blues will likely again be without defenseman Justin Faulk, who was injured by Nazem Kadri’s illegal check to the head in Game 2 that drew an eight-game suspension.

Boston will be without defenseman Kevan Miller, who was injured by a high hit from Washington’s Dmitry Orlov in Game 4 Friday night. Coach Bruce Cassidy said Miller spent the night in the hospital and is feeling better but did not travel with the team, which has a few players still left from 2010 and who won the Cup in 2011.

“Nothing changes for us,” Cassidy said. “We’re trying to get better every game this series. We want to get to four first, obviously, and that’s what’s in front of us. We’ve got three. It takes four to win. We’re not getting ahead of ourselves here.”

Carolina coach Rod Brind'Amour has an issue with how the Hurricanes' first-round series is being officiated, saying they were fighting the refs “plain and simple” after losing Game 3 in double overtime.

Carolina forward Jordan Staal was fined $5,000 by the NHL on Saturday for tripping Luke Kunin, which put Nashville on a 5-on-3. Brind'Amour detailed his frustration Saturday, noting referees can't review pucks over the glass. Carolina already was killing a penalty for delay when Staal tripped Kunin.

“No problem on the penalties,” Brind'Amour said. "You want to call them here? They better be called the other way. And that’s where you get this frustration on my part and the players part. So it’s done. We move on, you know, and we’ll see how it goes.”

Nashville coach John Hynes is just trying to spark his power play unit to take advantage of those chances. The Predators are 1-of-17 in this series after he essentially benched Matt Duchene and Ryan Johansen on the power play.

“The definition of insanity is doing the same thing over and over again," Hynes said.

Edmonton captain Connor McDavid led the NHL scoring 105 points with Edmonton teammate Leon Draisaitl ranked second with 84 points. Yet both have been kept off the scoreboard and have a minus-2 rating as the second-seeded Oilers now have to go on the road looking for their first win this postseason.

“Obviously dug ourselves a bit of a hole,” McDavid said. “It’s not the position we want to be in. We’ve been a good road team all year long and had success in that building, as well, and we’ve been good on back-to-backs. We have some things that we can be positive about.”

The Oilers won four of five in Winnipeg this season.

But goalie Connor Hellebuyck has stopped 70 of 71 shots for the Jets including a 1-0 overtime shutout Friday night. He has a league-best 0.48 goals-against average and .986 save percentage so far this postseason.

“Those two games are going to happen fast, and they're going to go by in a hurry so we need to be ready in a hurry,” Morrissey said.