The top line of Sidney Crosby, Jake Guentzel and Bryan Rust served as the lone constant for the Pittsburgh Penguins during an injury-plagued regular season, one that ended with a sprint to the East Division championship.

The magic the three players created, however, has vanished for long stretches during Pittsburgh's first-round series against the New York Islanders. Crosby has one goal in four games. So does Rust. Guentzel has just a single assist.

If the Penguins want to regain the edge in the series, one of the most productive lines in hockey needs to start looking like it. And Crosby knows it, suggesting it starts by playing Game 5 on Monday night (7 p.m., NBCSN) with the urgency the Islanders showed during a 4-1 victory on Long Island in Game 4. 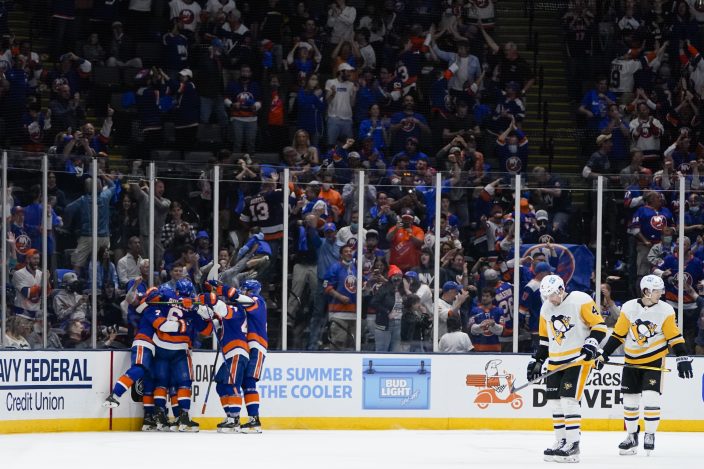 The New York Islanders celebrate a goal by Jordan Eberle during the third period of Game 4 of an NHL hockey Stanley Cup first-round playoff series against the Pittsburgh Penguins, Saturday, May 22, 2021, in Uniondale, N.Y. The Islanders won 4-1. (AP PhotoFrank Franklin II)

“With the position that they were in, you knew they were going to fight,” Crosby said. "And I just think that we have to have that same mentality. We can’t wait and see and have that type of approach. We’ve got to go in there and dictate the pace.”

Something New York did from the outset of Game 4 in a performance that brought echoes of their dominant opening-round sweep of Pittsburgh in 2019. The Islanders shut all three players down in the one-sided rout, though Islanders coach Barry Trotz isn't ready to say his team has unlocked the secret to keeping Crosby in particular in check.

“He's dangerous,” Trotz said Sunday. “He's an elite player who plays an elite game night in and night out. We just hope to contain top players like him.” 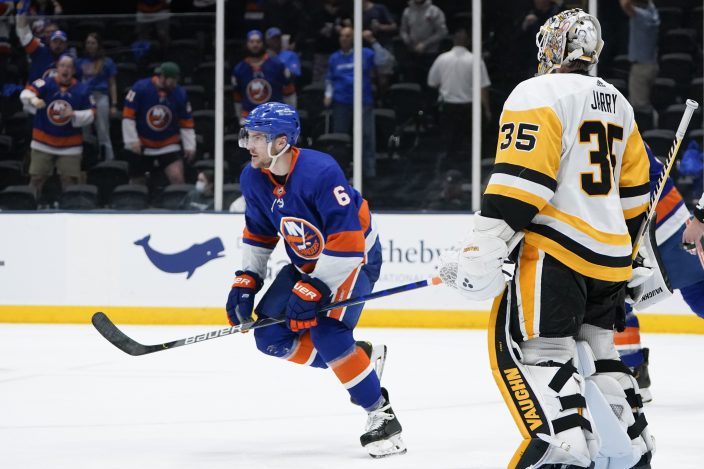 That hasn't been much of an issue for Trotz each of the past three times he's faced Crosby in the postseason, all three wins by Trotz-led teams.

While Penguins coach Mike Sullivan pointed out ebbs and flows during a series are common, the way New York suffocated Pittsburgh in Game 4 provided a reminder of how difficult the Islanders can make it for opponents when they are playing with an edge.

The teams split a pair of games in Pittsburgh, with New York rookie goaltender Ilya Sorokin getting the victory in the opener. He spent two games on the bench watching veteran Semyon Varlamov struggle only to return with three stellar periods on Saturday.

Expect Sorokin to remain in net going forward. After giving up two goals in the first 24 minutes of Game 1, he's allowed just two over the past 115 minutes in net.

“There's nothing separating the teams,” Trotz said. “It's nose to nose.”

Tampa took control of the series with a 6-2 victory in Game 4, but it came at a high price. Star Nikita Kucherov left in the third period after getting slashed by Florida's Anthony Duclair and did not return. Defenseman Mikhail Sergachev also absorbed a late hit that left him shaken up.

There's no update on either player's availability for Game 5,

Lightning coach Jon Cooper insisted he doesn't have a problem with a physical team attempting to send a message with their play as long as it's within the parameters of the game. His issue is when the referees can't seem to keep things in check, which he hinted is what happened in Game 4.

“But if it’s not controlled, stuff like this happens ... and you have superstars lying on the ice hurt and at times it’s tough,” Cooper said. “But you want passion in the game, I loved it, but now your skewed on what you are allowed to do and what you are not allowed to do. ... it just can be frustrating.”

Florida needs three consecutive wins to avoid another first-round playoff exit and seeing its playoff-series drought extend to at least 2022. The Panthers haven’t won a series since the 1996 Eastern Conference finals.

“We just need a bounce-back,” Florida forward Noel Acciari said. “It’s do-or-die time and we’ve just got to leave it all out on the ice. Everyone in the locker room knows that. We’re not out of this, and we know that.”

Alex Tuch has three goals in four games for the Golden Knights against the team that drafted him in the first round in 2014, only to trade him three years later in an expansion draft swap so the Wild could protect other players. Tuch has 18 goals in 51 career playoff games.

Since dealing Tuch, the Wild have only won three games over three playoff series and are now on the verge of elimination again.

Tuch scored Vegas’ second goal in Game 4, surging up the ice and slicing between Wild defensemen Jared Spurgeon and Matt Dumba en route to the net where he deked Cam Talbot and went right to dump in the puck.

“It’s definitely a weapon for sure. Not too many guys can skate at that speed and make kind of those plays,” captain Mark Stone said. “It looked very simple, but I can’t say I’ve ever been at that speed.”

Now that the shock of John Tavares’ injury early in Game 1 has worn off, the Maple Leafs are trying to rally around their captain’s absence and get contributions up and down the lineup. Four different Toronto players scored on Canadiens goaltender Carey Price, and that kind of depth on offense will be needed with the series shifting to Montreal.

“Any time your leader goes down, it’s a reality check,” said defenseman Zach Bogosian, who won the Stanley Cup with Tampa Bay last year when captain Steven Stamkos missed all but one period of the playoffs with an injury.

“Everyone has to step up. Everyone has to do their job. You can't replace John from a leadership standpoint, but you can have guys step up and take on bigger roles and it gives guys opportunities to maybe be in a situation that they wouldn’t have been.”