Phil Mickelson has delivered so many thrills and spills over 30 years of pure theater that no one ever knows what he will do next.

His latest act was a real stunner: A major champion at age 50.

Mickelson captured his sixth major and by far the most surprising Sunday at the PGA Championship. He made two early birdies with that magical wedge game and let a cast of contenders fall too far behind to catch him in the shifting wind of Kiawah Island. 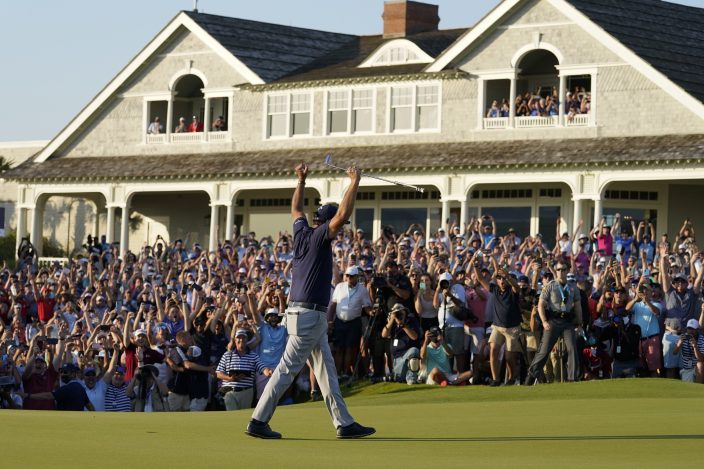 Phil Mickelson celebrates after winning the final round at the PGA Championship golf tournament on the Ocean Course, Sunday, May 23, 2021, in Kiawah Island, S.C. (AP PhotoMatt York)

He closed with a 1-over 73, building a five-shot lead on the back nine and not making any critical mistakes that kept him from his place in history.

Julius Boros for 53 years held the distinction of golf’s oldest major champion. He was 48 when he won the 1968 PGA Championship in San Antonio.

Pure chaos broke out along the 18th hole after Mickelson hit 9-iron safely to just outside 15 feet that all but secured a most improbable victory. Thousands of fans engulfed him down the fairway — a scene typically seen only at the British Open — until Mickelson emerged into view with a thumbs-up. 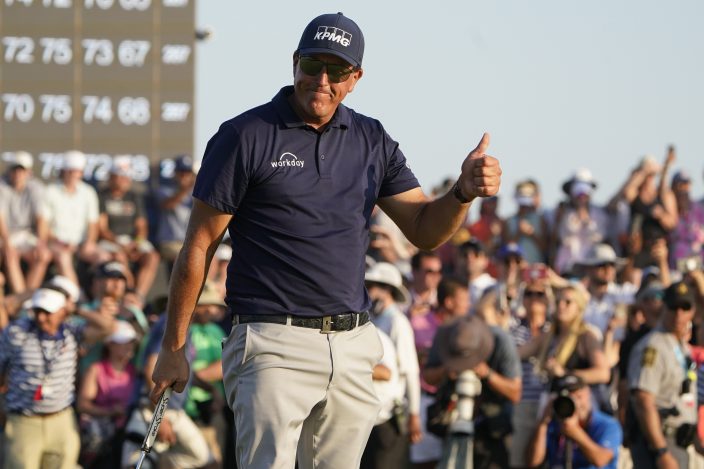 Phil Mickelson celebrates after winning the final round at the PGA Championship golf tournament on the Ocean Course, Sunday, May 23, 2021, in Kiawah Island, S.C. (AP PhotoChris Carlson)

Chants of “Lefty! Lefty! Lefty!” chased him onto the green and into the scoring tent, his final duty of a week he won’t soon forget.

Three months after 43-year-old Tom Brady won a seventh Super Bowl, Mickelson added to this year of ageless wonders. Mickelson became the first player in PGA Tour history to win tournaments 30 years apart. The first of his 45 titles was in 1991 when he was still a junior at Arizona State.

Mickelson became the 10th player to win majors in three decades, an elite list that starts with Harry Vardon and was most recently achieved by Tiger Woods.

Brooks Koepka and Louis Oosthuizen had their chances, but only briefly. Koepka was 4 over on the par 5s when the game was still on and closed with a 74. Oosthuizen hit into the water as he was trying to make a final run and shot 73.

Mickelson finished at 6-under 282

The victory came one week after Mickelson accepted a special exemption into the U.S. Open because at No. 115 in the world and winless the last two years, he no longer was exempt from qualifying. He had not finished in the top 20 in his last 17 tournaments over nearly nine months. He worried that he was no longer able to keep his focus over 18 holes.

And then he beat the strongest field of the year — 99 of the top 100 players — and made it look easy.

Wei-Ling Hsu eagled the par-5 15th hole creating a four-shot swing that gave her a two-shot lead, and won the LPGA Tour’s Pure Silk Championship for her first career victory.

She closed with a 3-under 68 to finish at 13-under 271, two shots clear of playing partner Moriya Jutanugarn.

Hsu’s eagle, aided by a fortuitous bounce that left her with a very makeable putt, came as Jutanugarn, who started the hole with a two-shot lead, drove into a bunker, needed two shots to get out, hit her approach to the edge of the green and three-putted for a double bogey.

The victory for the 26-year-old from Taiwan, in her 147th career start, was all but assured with another birdie on the par-4 16th that stretched her lead to three. And it came on a sweltering day on the Kingsmill Resort’s James River Course with parched fairways and greens that were fast and firm for all four rounds.

The first wire-to-wire winner on the tour since 2018, Young closed with an 4-under 68 for a two-stroke victory over Dawie van der Walt at Blue Hills Country Club. The 24-year-old former Wake Forest player finished at 19-under 269.

Allison Emrey won the IOA Golf Classic for her first Symetra Tour title, beating Amanda Doherty with a birdie on the first hole of a playoff. Emery closed with a 6-under 65 to match Doherty (68) at 10-under 203 at Alaqua in Longwood, Florida. Emrey jumped to No. 5 on the money list. ... France's Felix Mory won the Dormy Open at Osterakers in Sweden for his first Challenge Tour title. He beat Sweden’s Bjorn Hellgren with a birdie on the second hole of a playoff. Felix closed with a 2-over 74 to match Hellgren (72) at 15-under 274. ... Mone Inami won the Japan LPGA's rain-shortened Chukyo TV Bridgestone Ladies Open. She shot 61-68 to finish at 15 under, six strokes ahead of Momoko Osato.