Rinus VeeKay traveled from The Netherlands to his first Indianapolis 500 as a wide-eyed 15-year-old fan at the 100th running of “The Greatest Spectacle in Racing.”

Arie Luyendyk was one of his favorite drivers. When the two-time Indianapolis 500 winner held a meet-and-greet at Union Jack’s Pub across from the speedway, VeeKay waited his turn in line to meet the fellow Dutchman.

VeeKay is 20 now, and the youngest driver to start on the front row of the Indianapolis 500. 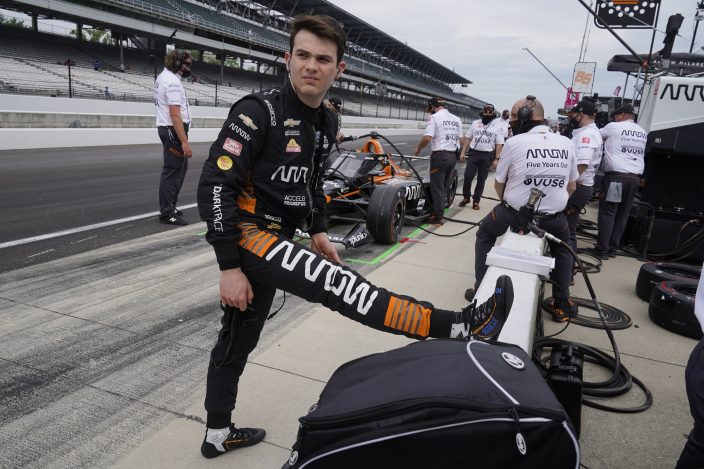 Pato O'Ward, of Mexico, stretches during practice for the Indianapolis 500 auto race at Indianapolis Motor Speedway, Wednesday, May 19, 2021, in Indianapolis. (AP PhotoDarron Cummings)

“I’ve been here as a spectator and right now I’m starting on the front row for my second Indy 500, which is insane,” he said. “I’m over the moon.”

There has been a seismic shift in IndyCar this season with an authoritative arrival of a brand new wave of drivers. They are kids in this series alongside six-time IndyCar champion Scott Dixon, considered the greatest driver of his generation.

And yet Dixon is the only veteran with a win so far this season. IndyCar has had five different winners through five races headed into Sunday's race. Three drivers were first-time winners, all but Dixon are 24 or younger.

VeeKay earned his first career win just two weeks ago on the road course at Indianapolis Motor Speedway. Now he will start the Indy 500 alongside Colton Herta, the 21-year-old American touted as IndyCar's newest star.

Herta is a second-generation IndyCar racer who has grown up in the series, left briefly to race in Europe, and nearly beat Dixon for the pole. He's a four-time winner already, has a brand new contract extension with Andretti Autosport, and he believes this new crop of IndyCar drivers can go wheel-to-wheel with the very best.

“I’m not surprised that our age group is winning,” Herta said. "I think we grew up with a very talented age group. We had a lot of young, rising stars that we raced against when we were younger that have made it to professional motorsports.

The new crop includes Pato O'Ward, who finished fourth in last year's IndyCar championship, got his first career win earlier this month and is part of the title hunt at fourth in the standings ahead of the double-points Indy 500. The 22-year-old Mexican is popular, but his confidence is sometimes mischaracterized as cockiness.

He's always had his sights on Formula One and his Arrow McLaren SP team is tied to McLaren Racing CEO Zak Brown. O'Ward was promised an F1 test with an IndyCar win, and Brown said it will happen at the end of this year.

The IndyCar faithful believe Herta and O'Ward should be racing in Europe and, if money and politics weren't so important, could be part of F1 teams.

But Brown said that attitude is dismissive of IndyCar, which runs on a much smaller budget and scale but has a competitive product with parity through the field. Brown warned against O'Ward becoming distracted by a future F1 test drive.

“Some could argue it's more difficult because there's more drivers and teams that have the ability. So that's an awesome accomplishment that he's laser-focused on.”

This group also includes Alex Palou, who at 24 is the old man of the new kids. The Spaniard won the season opener in his first race with Chip Ganassi Racing and, even after wrecking hard in Saturday qualifying, said he had no fears running again Sunday and qualified sixth for the Indy 500.

“It’s good to see that eagerness,” Dixon said. “I’ve been with other teammates in previous years, they don’t really want to go out.”

These drivers aren't afraid to race against their one-time heroes, who are now rivals and peers. Dixon turns 41 in July, the combined age of front-row qualifiers Herta and VeeKay, yet there's no intimidation.

“I remember when I was eating Cheerios at 8 years old and Scott Dixon was winning the Indy 500,” Herta said. “It is kind of crazy to see the guys you’re watching on TV, you get to race against now. Just can’t wait for Sunday, see what we can do.”

Column: Andrettis adjust as the family legacy winds down