The Nielsen company's latest rankings of popular television and streaming shows have one thing in common — “NCIS” at the top.

The CBS drama starring Mark Harmon as a Naval Criminal Investigative Service special agent has been on the air since 2003 and defines unhip. Yet the 8.7 million people who watched last Tuesday's episode was a bigger audience than anything else in prime-time television last week, Nielsen said.

The company also measures streaming audiences, although its reports lag behind the television ratings. Its most recent week available was April 19-25, and an estimated 890 million minutes of “NCIS” reruns were streamed on Netflix that week. Streamers could choose from among a staggering 353 episodes. 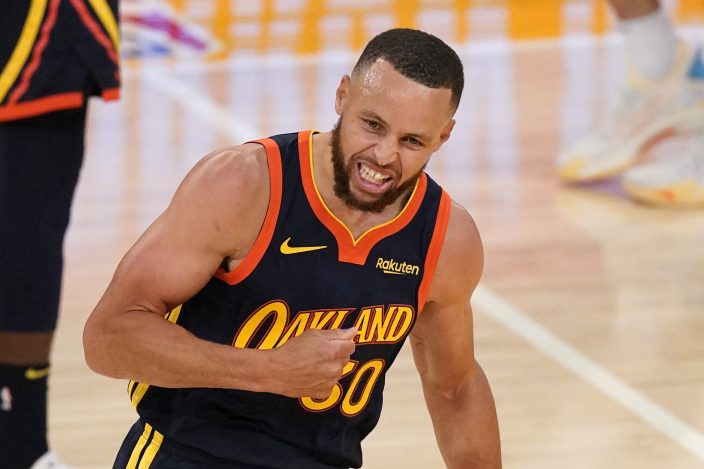 Golden State Warriors guard Stephen Curry celebrates after hitting a three-point shot at the end of the first half of an NBA basketball Western Conference Play-In game against the Los Angeles Lakers Wednesday, May 19, 2021, in Los Angeles. (AP PhotoMark J. Terrill)

The Disney+ Marvel miniseries, “The Falcon and the Winter Soldier,” was the second most-streamed show that week. Six episodes were available, and 796 million minutes of the show were streamed.

All of the other programs in Nielsen's top 10 that week were on Netflix. They included the young adult fantasy series “Shadow and Bone,” the game show “The Circle,” the science fiction movie “Stowaway” starring Anna Kendrick, the old Nickelodeon comedy “Nicky, Ricky, Dicky and Dawn” and broadcast reruns “Grey's Anatomy” and “Criminal Minds.”

On television, there was evidence that the NBA's gimmick of “play-in” games before the regular playoffs intrigued fans. Last week's game between Golden State and the L.A. Lakers brought 5.6 million people to ESPN, nearly double the most-watched game of the playoff's first round.

CBS was the most popular broadcast network last week, averaging 4.6 million viewers in prime time. NBC had 3.7 million, ABC had 3.5 million, Fox had 2.6 million, Univision had 1.3 million and Telemundo had 1 million.

For the week of May 17-23, the top 20 programs in prime-time, their networks and viewerships: