Despite being one of the NHL's hottest teams entering the Stanley Cup playoffs, the Pittsburgh Penguins are on the verge of another postseason meltdown.

The New York Islanders beat the Penguins 3-2 on a Josh Bailey's gift-goal in the second overtime Monday to take a 3-2 lead in the best-of-7 series.

The Penguins dominated Game 5 for long stretches, outshooting New York 50-28 only to be stymied by Islanders goalie Ilya Sorokin. The Penguins tossed away the game with three mistakes in their own zone. They all resulted in goals. The worst was by goaltender Tristan Jarry. He tried to make a breakout pass up the middle of the ice and saw Bailey steal it and score 51 seconds into the second overtime. 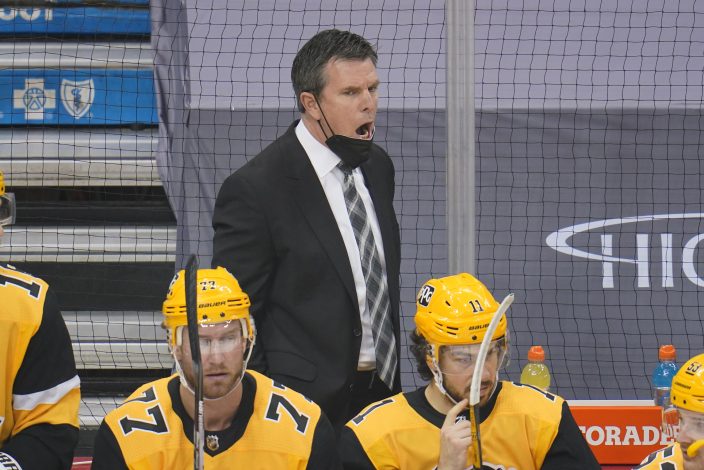 “I’m a pretty easygoing person, so it’s just about going about my business and doing what I can to be better the next day,” Jarry said Tuesday.

Jarry has played every game in the series with backup Casey DeSmith sidelined with an undisclosed injury. Game 6 is Wednesday night on Long Island (6:30 p.m. ET, NBCSN).

The must-win scenario is not what the Penguins expected after posting a 26-8-2 record from March 2 through the end of the regular season. They now face a second straight postseason disappointment after being ousted by 12th-seeded Montreal in last year's qualifying round. 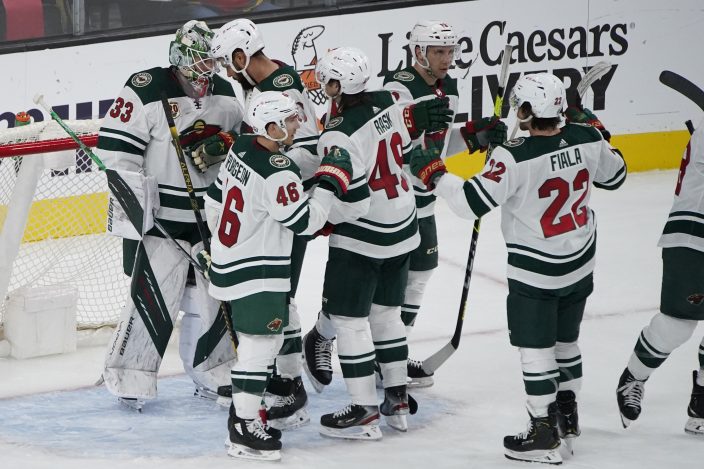 “We’ve got to win one hockey game. That’s the way I look at it," he said. "That’s what I said to the players after the game. We have a lot of leadership that has been through a lot of experiences in this league, especially in the playoffs. We’ll just keep this thing in perspective.”

The Islanders have defeated the Penguins in four of their five postseason meetings, including a four-game sweep two years ago. 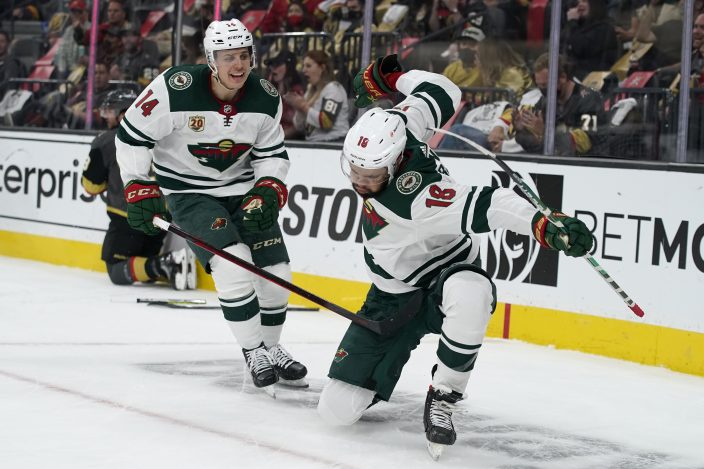 Islanders coach Barry Trotz said his team is focused on Wednesday, not beyond.

"When we get to our game and we’re able to stay with our game, we’re in those in those really important clinching games and and we’ve had success,” he said. “When we haven’t been able to, then it's a little more difficult.”

Trotz had no update on forward Oliver Wahlstrom, who left the game in the third period after awkwardly crashing into the boards. Veteran Travis Zajac probably would play if he can’t. 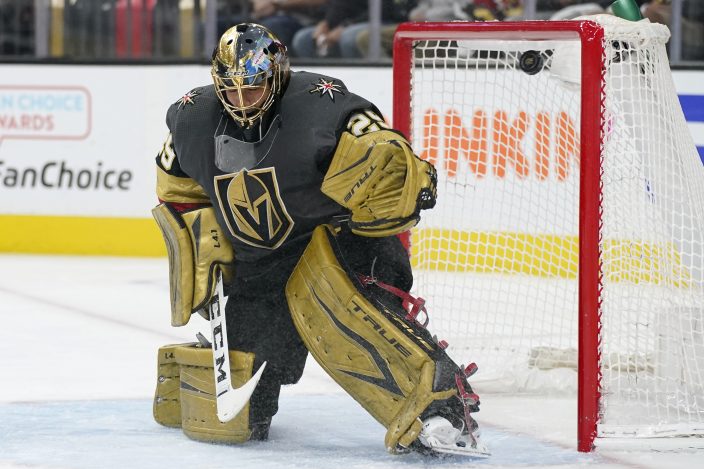 The Panthers got a 36-save performance from Spencer Knight in his Stanley Cup debut in a 4-1 win over the defending Cup champions to stave off elimination. At 20 years, 35 days, the Darien, Connecticut, native became the youngest goaltender in NHL history to make his playoffs debut with his team facing elimination.

“I’m not really thinking much about the score, what I’ve given up, what’s coming at me,” Knight said. “I just kind of react and just remember that I’m playing hockey, regardless of whether it’s practice, regular season games, or playoff games.” 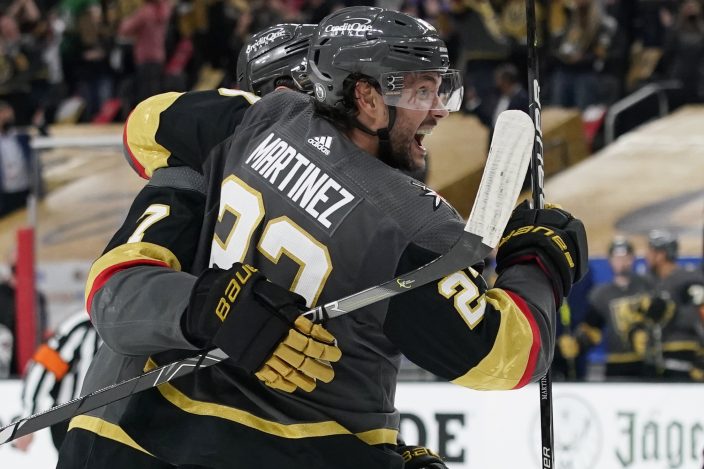 Vegas Golden Knights defenseman Alec Martinez (23) celebrates after scoring against the Minnesota Wild during the second period of an NHL hockey game Monday, May 24, 2021, in Las Vegas. (AP PhotoJohn Locher)

“They're weren’t just going to roll over and die,” Stamkos said. "It’s two really good hockey teams going at it.” 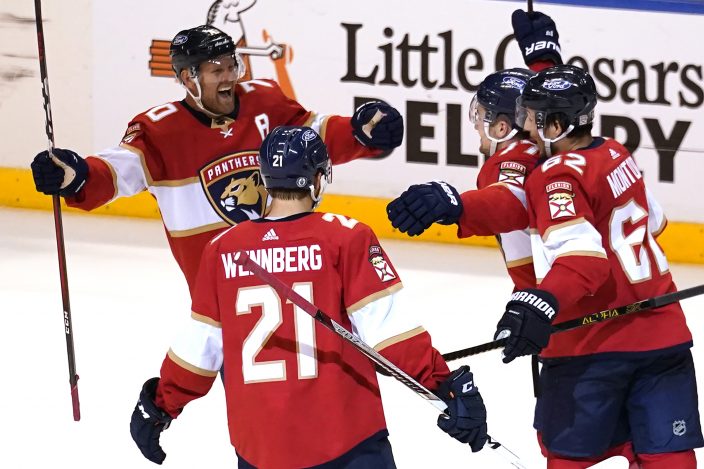 With the Presidents’ Trophy-winning Colorado Avalanche waiting in the second round, Vegas will try a second time to eliminate the Wild after a 4-2 loss in Game 5 despite a 40-14 shot advantage.

“I just think it’s situational. Clearly they’re a good here. We’re a good team there. But both can play in the other building. We’ve talked all the time: Doesn’t matter who, where, when. We’re going to play hard,” Wild coach Dean Evason said. The Golden Knights, who are still missing star Max Pacioretty with an undisclosed injury, liked the way they played Monday.

“I think if we come with the same effort we’re going to get a different result. But we can’t be down 3-1 after the first period. It finally cost us,” captain Mark Stone said.

NOTES: The NHL fined defenseman Ryan McDonagh and forward Pat Maroon of the Lightning. McDonagh was docked $5,000 for cross-checking Mason Marchment on Monday night, while Maroon will pay $3,879 for unsportsmanlike conduct at the end of the game.

AP Sports Writers Dave Campbell in Minneapolis, Tim Reynolds in Miami and Will Graves in Pittsburgh contributed to this report.