Along with the coastal views at Kiawah Island for the PGA Championship, it was the first time since the COVID-19 pandemic that a major championship actually sounded like one.

A larger gathering could happen on the other side of the Atlantic.

The R&A said on Tuesday it was optimistic that Royal St. George's could have as much as 75% capacity for the British Open on July 15-21. Martin Slumbers, the CEO, also said capacity for golf's oldest championship could be as low as 25%. 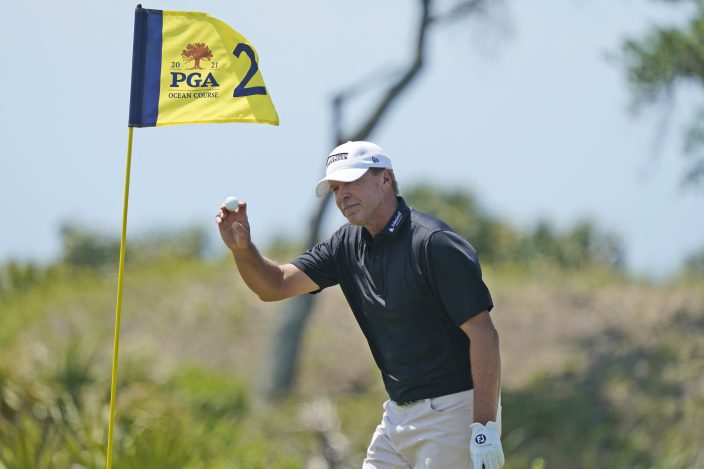 Steve Stricker tips his ball to the crowd after an eagle on the second hole during the second round of the PGA Championship golf tournament on the Ocean Course Friday, May 21, 2021, in Kiawah Island, S.C. (AP PhotoMatt York)

So much depends on government regulations, and that won't be determined until a month before the Open.

“The big uncertainty for us is clarity with the government and health authorities around social distancing, and that will determine what the atmosphere will be like at the Open,” Slumbers said. “We are building the infrastructure as we would normally build, so there’s the big grandstands going around the 18th and around the first, and we’re building them in a way that we can adapt for social distancing depending on what the rules are going to be.

“I'm keen to get as many spectators in as possible because I do think that's what creates the atmosphere, and I think actually it's what makes the players play just a little bit better.” 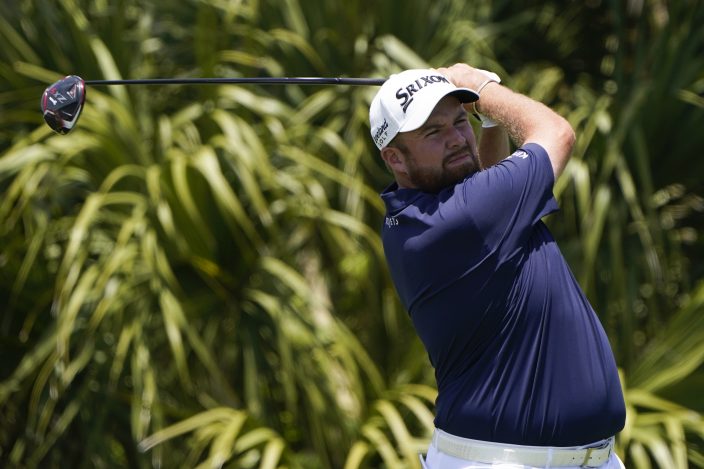 Shane Lowry, of Ireland, works off the second tee during the third round at the PGA Championship golf tournament on the Ocean Course, Saturday, May 22, 2021, in Kiawah Island, S.C. (AP PhotoChris Carlson)

Watching the PGA Championship from the home of golf, Slumbers said it was a clear there was a gap between the U.S. and the UK in terms of restrictions.

What he wants to avoid is the chaos that erupted on the 18th hole at Kiawah when Phil Mickelson was swallowed up by the crowd and had to fight his way through to the green.

That's a typical scene, though far more orderly, at the British Open. Crowds often follow the final group down the fairway toward the green, but at some distance.

“We're very careful on how we move the crowds around, so we will continue to keep the crowds on the side of the 18th until it’s all over and then allow them to move closer to the green," Slumbers said. “The whole thing is a balance to getting the excitement but making sure the players are safe.”

Seth Waugh, the CEO of the PGA of America, issued an apology to Mickelson and Brooks Koepka about the wild scene that trapped them Sunday. Koepka said his tender right knee was dinged a few times trying to get through.

“While we welcome enthusiastic fan engagement, we regret that a moment of high elation and pent-up emotion by spectators on the 18th hole ... briefly overwhelmed security and made two players and their caddies feel vulnerable,” Waugh said. “We always put player safety at the top of our list and are grateful that order was restored.”

Waugh said he apologized to Mickelson and Koepka on behalf of the PGA.

What should be a happy occasion for Inbee Park playing an LPGA Tour event in her adopted hometown of Las Vegas comes with a touch of sorrow.

“He is the one that really got me into this game, and he would probably want me to be playing this week,” Park said from the Bank of Hope LPGA Match Play at Shadow Creek. “Want to make him proud, so really want to play well this week and enjoy while I'm here in Las Vegas.”

Park said her grandfather, B.J. Park, had been hospitalized for four years. She won the HSBC Women's World Championship in Singapore and flew to South Korea to see him. She said doctors told her it would be a good time to say goodbye.

“It was probably the saddest thing I ever had done, but send him to a good place and my family back home, friends and everybody, just wished him well,” she said. “So yeah, I think he's going to a good place. He'll be watching me from the sky, from heaven.”

Until the PGA Championship, the safe bet was that Phil Mickelson would only be at the Ryder Cup if he was driving a cart as an assistant captain.

Now that he has won a major, that makes it a little more complicated for U.S. captain Steve Stricker.

The last major champion left off a Ryder Cup team was Todd Hamilton, who was 38 when he won the British Open in 2004 at Royal Troon. He did not finish among the top 15 in points.

Mickelson moved up 36 spots to No. 16 with still just over three months left.

Stricker was asked on Saturday, while Mickelson was still on the course, if he was in the mix for a captain's pick.

“Obviously, if he were to go on and win here and continue to play some great golf — but he hasn’t played really all that well up to this point, spurts here and there,” Stricker said.

He said winning at Kiawah Island would count for a lot because the course is similar in conditions to Whistling Straits.

“We'll look at who played well here this week for sure, because this is a telltale for Whistling Straits,” Stricker said.

Mickelson has played the Ryder Cup the last 12 times, an American record.

Shane Lowry will have kept the silver claret jug for two years when he has to return it at Royal St. George's for the first British Open since winning at Portrush two years ago.

He promises it will be in good shape, even if it has seen better days.

“It has been sent back to be straightened once, yes,” Lowry said. “We actually noticed going through the airport, and I noticed on the airport scanner that it was a little bit of a bend in it.”

The good news? He's not alone. Zach Johnson, who won in 2015 at St. Andrews, also had to have it repaired. And apparently there were others.

“When Zach returned the trophy, he said he did have to take it to be repaired,” R&A chief Martin Slumbers said. Johnson told him that when he took it to a shop in Florida, the silversmith behind the counter said, “Oh, I've seen this twice before.”

Open champions typically return golf's oldest trophy on Monday of the Open, so even for the back-to-back winners — Padraig Harrington, Tiger Woods, Tom Watson and Lee Trevino in the last 50 years — it is briefly out of their possession.

Richard Burton held it for seven years after winning in 1939. The Open was canceled until 1946 because of World War II.

Charles Schwab has extended its title sponsorship agreement at Colonial through 2026. ... The RBC Canadian Open, canceled for the second straight year because of the pandemic, will be played next year at Oakdale Golf and Country Club in Toronto. ... Players from the top 50 in the world had won 36 consecutive majors until Phil Mickelson (No. 115) won the PGA Championship. ... Ryo Ishikawa returns to the U.S. Open after winning the Japan qualifier on Monday. ... The USGA is taking three of its amateur championships to Bel-Air in Los Angeles, starting with the U.S. Women's Amateur in 2023. Bel-Air also will host the Curtis Cup in 2026 and the U.S. Mid-Amateur in 2030.

Phil Mickelson is the eighth player to win a major from outside the top 100 in the world since the ranking began in 1986. John Daly did it twice.

“Maybe he thinks he’s got more than one left. I don’t think anybody will doubt him after this one, but I think it’s just wild.” — Jordan Spieth on Phil Mickelson winning the PGA Championship at age 50.