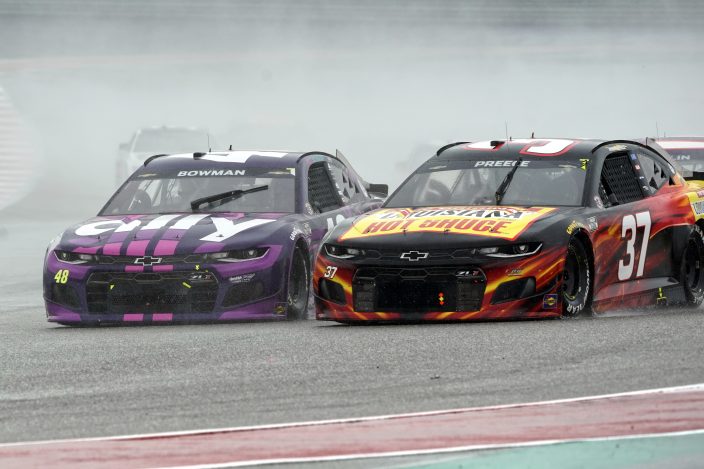 Alex Bowman (48) and Ryan Preece (37) race into Turn 13 during the NASCAR Cup Series auto race at the Circuit of the Americas in Austin, Texas, Sunday, May 23, 2021. (AP PhotoChuck Burton)

Last race: Chase Elliott won the rain-shortened series debut at the Circuit of the Americas in Texas.

Fast facts: Elliott's victory was the 12th of his career and sixth on a road course. He has also won five of the last six road course races. ... The victory was the 268th for Hendrick Motorsports, tying the team with Petty Enterprises for the most in Cup Series history. ... Denny Hamlin continues to lead the points standings by 98 over William Byron. Hamlin is the only driver in the top seven not to have won a race this season. ... Elliott became the 11th different winner in 14 races this season. 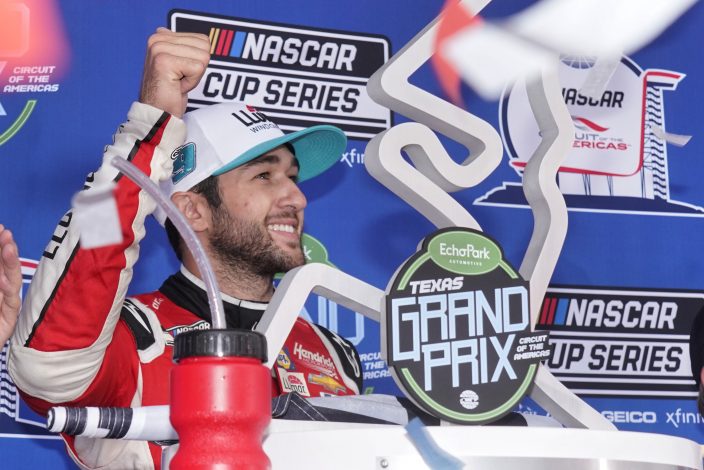 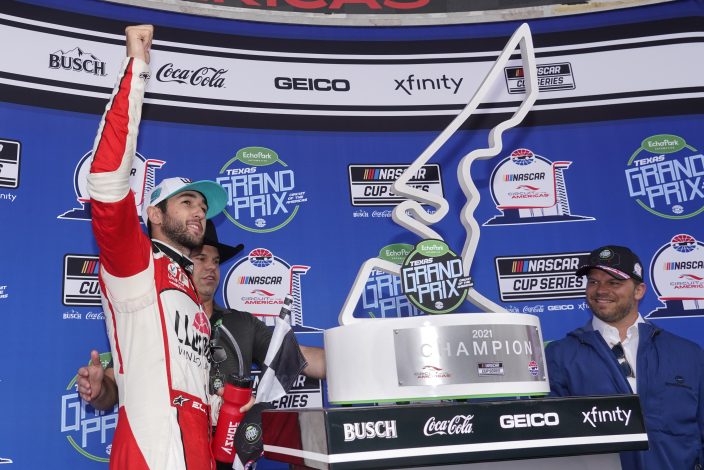 Chase Elliott, left, pumps his fist in Victory Lane after winning a NASCAR Cup Series auto race at Circuit of the Americas in Austin, Texas, Sunday, May 23, 2021. (AP PhotoChuck Burton)

Last race: Busch won in the series' debut on the Circuit of the Americas course in Texas.

Fast facts: Defending series champion Austin Cindric's points lead over Harrison Burton is 77 with A.J. Allmendinger 81 behind and Daniel Hemric 88 back. Justin Allgaier, who has two wins in 11 starts, is fifth, 112 points back. ... Hemric has not won, but is the only driver to have finished on the lead lap in all 11 races.

Last race: Todd Gilliland dominated to win at the Circuit of the Americas in Texas.

Fast facts: Gilliland's victory was the first for Ford in nine races and came after Chevrolet posted its first victory in the eighth race. ... John Hunter Nemechek remains the points leader by 31 over Ben Rhodes. Sheldon Creed is 69 back, Austin Hill is 93 behind and Gilliland is 108 back. ... Hill is the only driver in the top five without a victory. ... Series regulars have won six of the nine races this season.

Last race: Max Verstappen posted a dominating victory at the Monaco Grand Prix and moved past seven-time series champion Lewis Hamilton and into the lead of the driver standings.

Fast facts: Scott Dixon won the pole position, turning four laps around the speedway with an average speed of 231.685 mph. He edged Colton Herta by 0.03 seconds, or roughly six feet over the 10-mile qualifying run. ... Dixon is a six-time series champion, but is seeking just his second victory in the marquee race. ... Sato's victory last year was his second in the 500. ... Dixon leads Alex Palou by 13 points in the season standings. Josef Newgarden is 28 points back, Pato O'Ward is 30 behind and Graham Rahal is 39 back.

Next events: May 28, Terre Haute, Indiana, and May 31, Lawrenceburg, Indiana.