Derrick Rose scored 26 points, Julius Randle shook off a miserable first half to lead a third-quarter turnaround and the New York Knicks beat the Atlanta Hawks 101-92 on Wednesday night in Game 2 to tie the series.

Game 3 is Friday night in Atlanta, where the Hawks will be allowed to welcome a full capacity crowd for the first time

Randle was 0 for 6 with just two points at halftime and the Knicks were staring at a 13-point deficit. But with Rose moving into the starting lineup to open the third quarter, Randle scored 11 points on 4-for-5 shooting in the period as the Knicks took the lead. 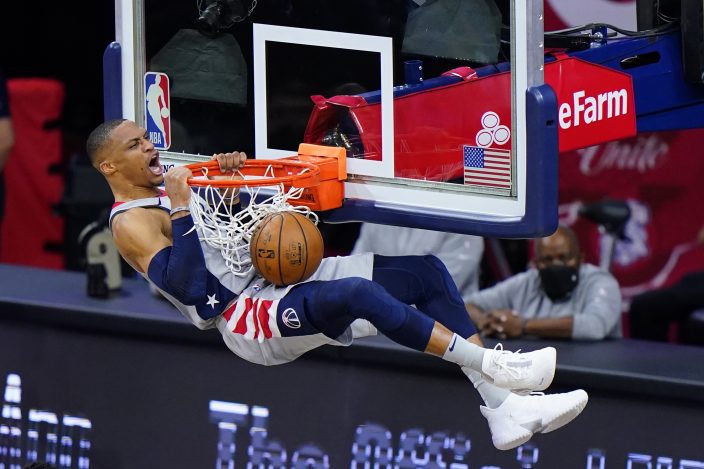 Washington Wizards' Russell Westbrook reacts as he dunks the ball during the first half of Game 2 in a first-round NBA basketball playoff series against the Philadelphia 76ers, Wednesday, May 26, 2021, in Philadelphia. (AP PhotoMatt Slocum)

The winner of the NBA’s Most Improved Player award finished with 15 points and 12 rebounds despite another poor shooting night. He was 5 for 16 after going 6 for 23 in the opener.

But he came through with it counted along with Reggie Bullock, who made four 3-pointers in the second half and also had 15 points as the Knicks guaranteed there will be at least one more home game in this surprising season.

Trae Young scored 30 points for Atlanta after having 32 and hitting the tiebreaking shot in Game 1. Bogdan Bogdanovic and De’Andre Hunter added 18 apiece.

Ben Simmons put a spin move on Russell Westbrook that sent him sprawling to the floor several minutes before a leg injury sent the NBA’s triple-double king to the locker room.

Westbrook went down after colliding with Furkan Korkmaz early in the fourth quarter. He limped off the floor and was restrained by security after a fan threw popcorn at him as he was headed under the tunnel.

Simmons and Joel Embiid each scored 22 points and Tobias Harris added 19 for the top-seeded Sixers. Simmons added nine rebounds and eight assists after becoming just the sixth player in NBA history to have at least 15 rebounds and 15 assists in a playoff game in a 125-118 win in Game 1

Bradley Beal had 33 points for Washington. Westbrook finished with 10 points and 11 assists for sub-.500 Washington.