Anthony Davis had 34 points and 11 rebounds, LeBron James added 21 points and nine assist and the Los Angeles Lakers celebrated their first home playoff game in more than eight years with a 109-95 victory over the Phoenix Suns on Thursday night in Game 3.

Dennis Schröder added 20 points and the seventh-seeded defending NBA champs took a 2-1 lead with their second straight victory in the first-round series. Los Angeles pulled away from erratic Phoenix in the second half for the second straight game, and a fierce late rally by the Suns came up short.

Game 4 is Sunday in Los Angeles. 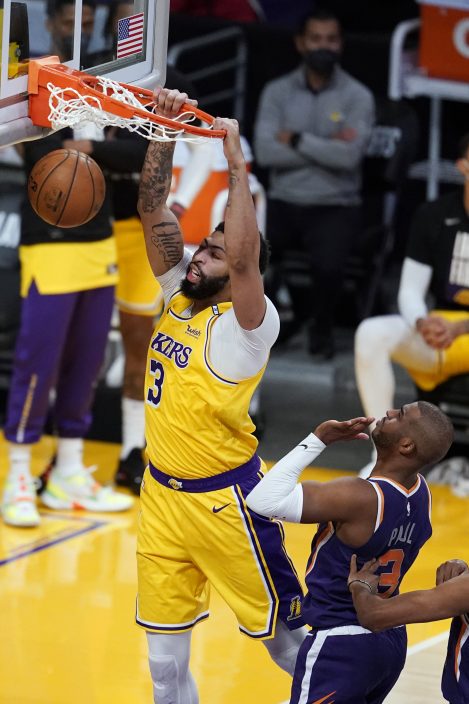 Deandre Ayton had 22 points and 11 rebounds for the second-seeded Suns, who are in an early hole in their first postseason series in 11 years. Phoenix also came unglued in the final minute when Devin Booker and Jae Crowder both were sent to the locker room early.

Booker scored 19 points on 6-of-19 shooting, but the star guard was ejected with 35.4 seconds to play after committing a flagrant foul against Schröder. Moments later, Crowder got a technical foul, following Booker off the court after apparently trying to confront Schröder.

Phoenix also got another quiet game from Chris Paul, who played just 2 1/2 minutes in the fourth quarter even though coach Monty Williams said the star point guard’s shoulder had healed. Paul had seven points and six assists in 27 minutes. Roughly 7,000 masked fans watched inside Staples Center as the Lakers hosted their first playoff game in their downtown arena since April 28, 2013. Los Angeles won its 17th title in the Florida bubble last October and the legions of fans confined to watching their beloved team’s rebirth on television turned up in force for this streak-breaking win.

Giannis Antetokounmpo finished with 17 points and 17 rebounds for the Bucks. They lead the first-round series 3-0 and will try for a sweep Saturday.

The Bucks won Game 2 by 34 points and made Game 3 just as decisive, leading by as many as 32. Brook Lopez scored 13 points, while Bryn Forbes and Bobby Portis each had 11 for Milwaukee.

Jimmy Butler scored 19 points and Bam Adebayo had 17 for Miami. Nemanja Bjelica — little-used by Miami this season, then called upon Thursday out of desperation for any sort of outside shooting — scored 14 points.