Chris Bassitt was overcome by tears after pitching the first complete game of his career, releasing his emotions after all he has endured to become a dominant pitcher for the Oakland Athletics — appreciative of all of those who helped him reach this point.

At 32, the A's ace is as confident and dominant as ever in his eighth major league season.

Bassitt pitched a two-hitter for his first career complete game, Sean Murphy hit a two-run single in the decisive sixth inning and the A's took advantage after Bay Area traffic kept Shohei Ohtani off the mound for a 5-0 win over the Los Angeles Angels on Thursday night. 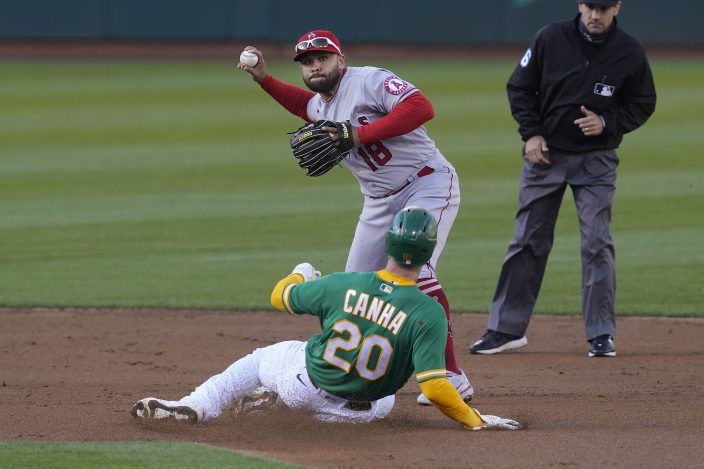 Los Angeles Angels second baseman Jose Rojas, top, throws to first base after forcing out Oakland Athletics' Mark Canha at second base during the first inning of a baseball game in Oakland, Calif., Thursday, May 27, 2021. Ramon Laureano was safe at first. (AP PhotoJeff Chiu)

Bassitt underwent Tommy John surgery in 2016 then worked to regain his place in Oakland’s pitching staff.

In a lighter moment after coming off the mound, Bassitt held up a trident spear to celebrate this triumph, a purchase made by Sean Manaea to fit the whole A's “Ride the Wave” theme as they try to defend their AL West title. 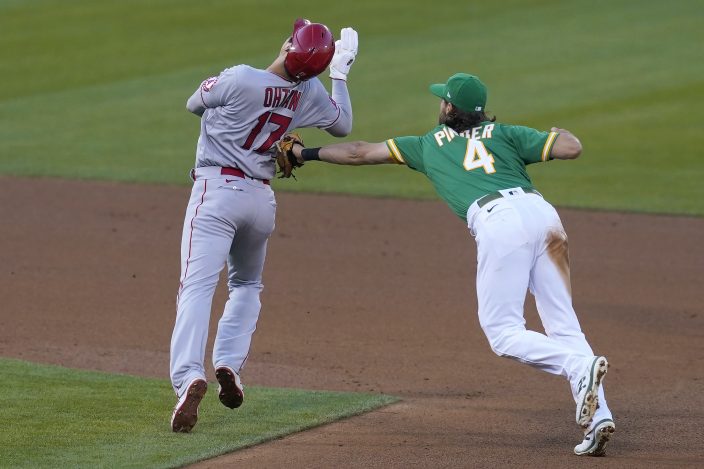 “He’s kind of like a Scherzer type," Angels manager Joe Maddon said, comparing Bassitt to three-time Cy Young winner Max Scherzer. "This guy’s really good, that’s not a fluke by any means. He’s going to be someone to reckon with. He’s the kind of a guy, the guy that we have to learn how to beat in our division, he’s that good.”

Bassitt (5-2) struck out nine and walked one to beat the Angels in back-to-back outings after a win Saturday in Anaheim, allowing just two runs in 7 2/3 innings. He completed this gem in 114 pitches, improving to 1-2 over five starts at home this year.

He allowed a one-out double in the ninth to Justin Upton then recovered to finish it in 2 hours, 59 minutes with Lou Trivino warming up in the bullpen. 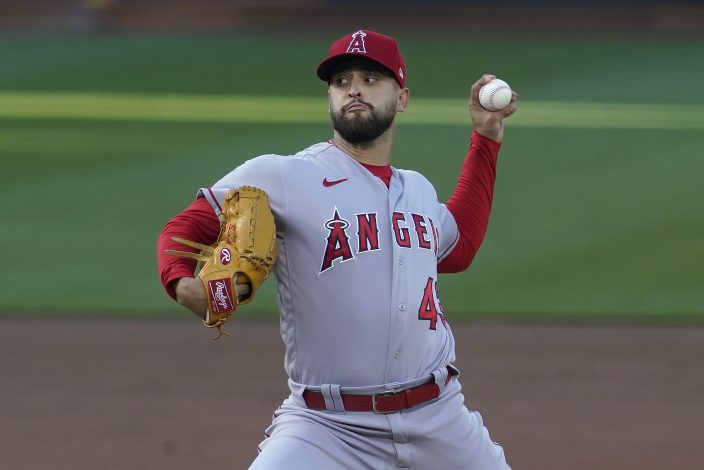 Los Angeles Angels' Patrick Sandoval pitches against the Oakland Athletics during the first inning of a baseball game in Oakland, Calif., Thursday, May 27, 2021. (AP PhotoJeff Chiu)

“He's using all his pitches, he's getting ahead in counts, soft contact, there's not a lot of hard contact off him. He's using all his stuff and he's unpredictable and he's pitching with a lot of confidence right now," A’s manager Bob Melvin said. "This is probably the best stretch of his career.”

Matt Chapman and Elvis Andrus also had run-scoring singles while Tony Kemp added a sacrifice fly in the five-run sixth in an interesting opener to the four-game series.

Everything changed quickly some 2 1/2 hours before first pitch. 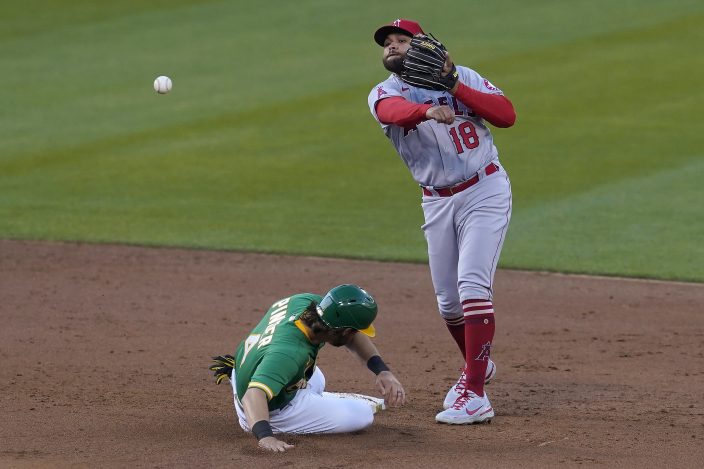 Los Angeles Angels second baseman Jose Rojas (18) throws to first base after forcing out Oakland Athletics' Chad Pinder at second base on a double play hit into by Ramon Laureano during the third inning of a baseball game in Oakland, Calif., Thursday, May 27, 2021. (AP PhotoJeff Chiu)

Ohtani moved from the mound to designated hitter after his arrival to the ballpark got delayed when he was forced to take BART public transportation because of an accident on the Bay Bridge that held up the team bus.

“Really good, right? I thought he was outstanding. Short notice," Maddon said. “That was a great outing to build off of.” 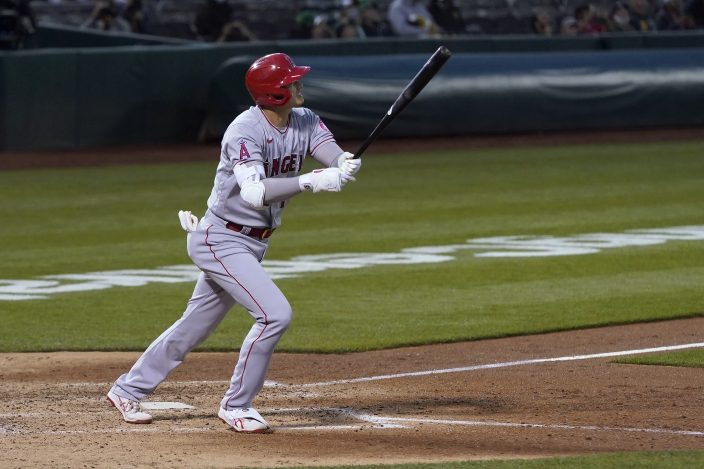 Los Angeles Angels' Shohei Ohtani flies out during the sixth inning of the team's baseball game against the Oakland Athletics in Oakland, Calif., Thursday, May 27, 2021. (AP PhotoJeff Chiu)

Aaron Slegers (2-2) relieved and gave up Chapman's RBI single to break up a scoreless game before Murphy gave Bassitt a nice cushion.

Ohtani, who hit his 15th home run Tuesday against Texas, went 0 for 3 with a walk and a strikeout.

Mitch Moreland came off the injured list from a stint with an inflamed rib and had been set to start for Oakland before the Ohtani switch meant the A's faced a lefty starter rather than a right-hander. 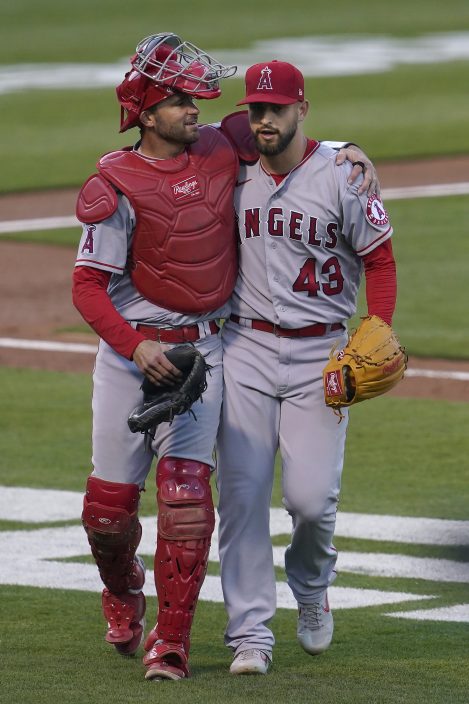 Los Angeles Angels catcher Drew Butera, left, and pitcher Patrick Sandoval walk toward the dugout after the third inning of a baseball game against the Oakland Athletics in Oakland, Calif., Thursday, May 27, 2021. (AP PhotoJeff Chiu)

“Just more right-handed bats,” Melvin said. “We had a few more left-handed bats in the lineup for Ohtani.”

The A's announced they will begin hosting fans at full capacity beginning June 29 against Texas. There will be a fireworks show July 2 after a game against the Red Sox. Thursday's game drew 5,487. 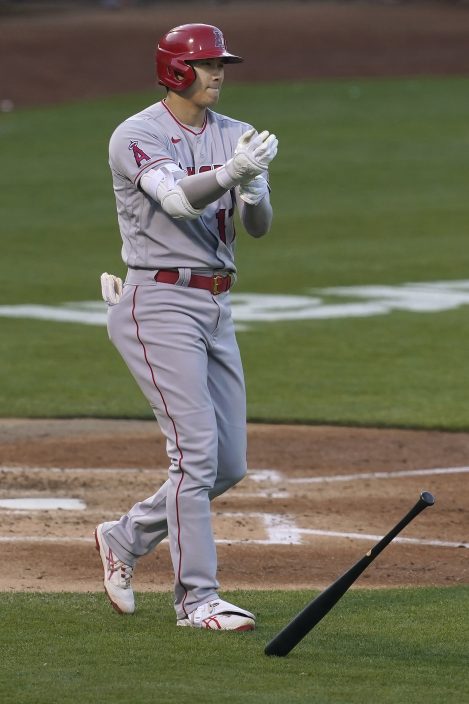 Los Angeles Angels' Shohei Ohtani drops his bat after drawing a walk during the fourth inning of the team's baseball game against the Oakland Athletics in Oakland, Calif., Thursday, May 27, 2021. (AP PhotoJeff Chiu)

Angels: The Angels reached the 85% vaccination threshold and Maddon is looking forward to the fact “it makes communicating a lot easier. It's liberating.”

Maddon also scratched C Kurt Suzuki, who was traveling with Ohtani. The Angels want him to catch the two-way Japanese star Friday night when he pitches instead.

Athletics: LHP Jesús Luzardo, recovering from a hairline fracture in his pitching pinkie sustained playing video games, allowed one hit and struck out one over 1 2/3 innings, throwing 25 pitches as planned in his first rehab start for Triple-A Las Vegas on Thursday night. ... LHP A.J. Puk (strained left biceps) — who surrendered a homer in the sixth inning pitching in relief with Las Vegas while striking out three Tuesday night — will likely build up to pitching a couple of innings out of the bullpen before rejoining the A's, though manager Bob Melvin didn't yet know the formal plan for Puk's next step.

The A's optioned OF Luis Barrera to Triple-A to clear roster room for Moreland's return.