Japan is set to extend a coronavirus state of emergency in Tokyo and other areas with infections not yet slowing to levels it can safely host the Olympics opening in just over 50 days.

The extension is needed as people are increasingly roaming in public, especially in Tokyo and Osaka, when they should be doing the opposite, and it’s feared that lifting the emergency would cause an instant rebound in infections, Economy Revitalization Minister Yasutoshi Nishimura said.

The current emergency in the capital and eight other metropolitan areas was to end next Monday, but hospitals in some areas are still overflowing with COVID-19 patients and serious cases hit new highs recently. 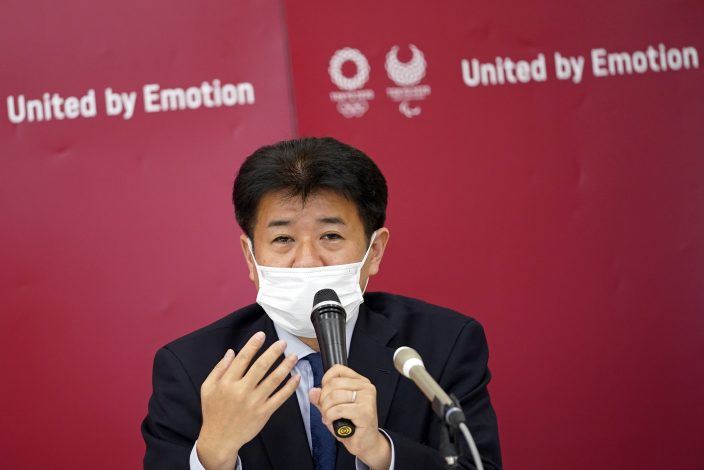 Tokyo 2020 Games Delivery Officer Hidemasa Nakamura speaks during a press conference after a roundtable on COVID-19 countermeasures at Tokyo 2020 Games in Tokyo Friday, May 28, 2021. A group of experts participated in a second roundtable on COVID-19 countermeasures proposed for implementation at the Olympic and Paralympic Village. (Franck RobichonPool Photo via AP)

Nishimura told reporters the government proposal of a 20-day extension to June 20 in the nine areas received preliminary approval from experts ahead of an official announcement later Friday. The southern island prefecture of Okinawa is already under emergency status through June 20.

Olympic organizers have to decide around that date whether to allow any fans at all, after overseas spectators were banned months ago. A plan to prioritize vaccinations for Japanese athletes also is being delayed to around that time, according to media reports.

The Olympics are scheduled to start on July 23 after a one-year postponement due to the pandemic, and worries about the new variants and Japan’s slow vaccination rollouts have triggered calls from the public and medical experts to cancel the Games.

Meanwhile, Japan has lagged on vaccinations due to bureaucratic and planning missteps and shortages. Only 2.3% of the population has been fully vaccinated, and the current phase targeting older adults is not scheduled to finish before the Games.

Still, Prime Minister Yoshihide Suga and his government are determined to host the Olympics. The International Olympic Committee has also said the Olympics would go ahead even if the host city Tokyo is under emergency measures.